After Inauguration Day on Jan. 20, 2021, and with the seating of the two newly elected Democratic senators from Georgia, Democrats will have control of the White House and both houses of Congress for the first time since 2011. Democratic control in Congress will be very narrow, limiting what legislation can pass in either house. In the U.S. House of Representatives, Speaker Nancy Pelosi (D-Calif.) will lead an 11-member majority but will also lose several members to appointments in the Biden Administration, potentially narrowing her majority pending special elections in those districts. The Senate, with 50 Democrats (technically, 48 Democratic members and two Independents who will caucus with Democrats) and 50 Republicans, will have a Democratic majority only through Vice President Kamala Harris as a tie-breaking vote in her role as President of the Senate.

Among other things, the makeup of the 117th Congress will restrain what tax proposals can become law, either through regular order or a budgetary reconciliation process (discussed below). This Holland & Knight alert outlines the tax policy priorities of President-Elect Joe Biden and congressional Democrats as currently known, what the congressional makeup may mean for those priorities and the outlook ahead.

The key components of the Biden campaign’s tax proposals include: 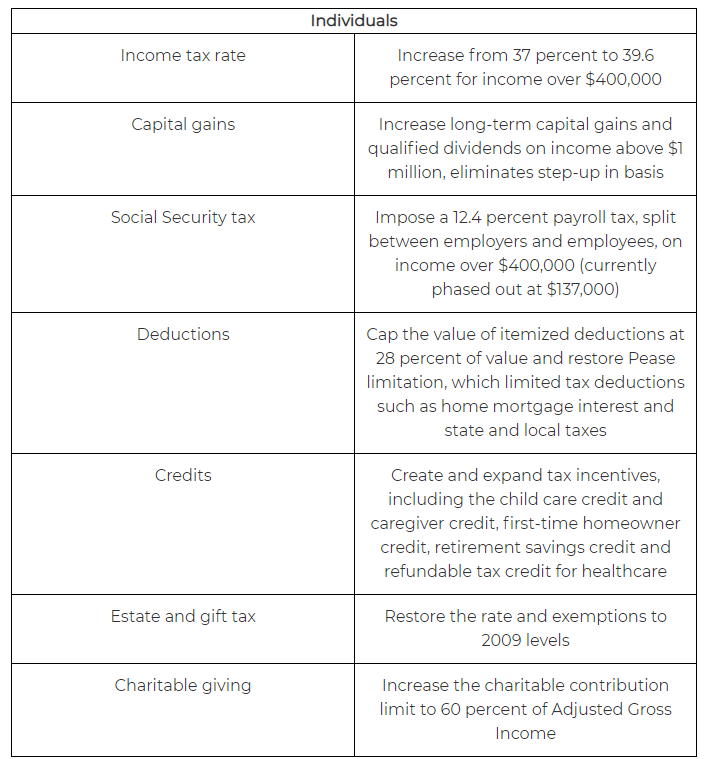 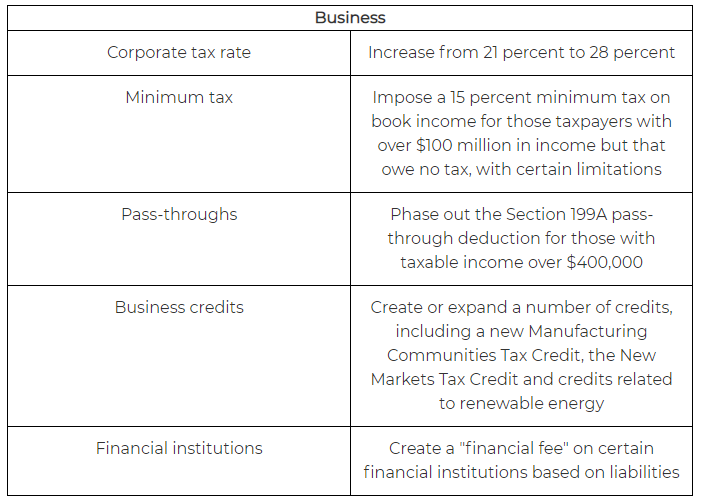 Budget Reconciliation Given the slim Democratic majority in Congress, any tax legislation will have two paths to becoming law. It will either need to have near-unanimous Democratic support in the House and bipartisan support in the Senate (under regular order) or be passed through the budget reconciliation process. (See also Holland & Knight's previous alert, "Senate Elections Make Budget Reconciliation a Potential Tool in 117th Congress," Jan. 7, 2021.) Importantly, the budget reconciliation process in the Senate would require unanimous Democratic support. Achieving such support will likely be difficult given the increased power of Democratic members from more moderate and conservative states.Tax Policy and Congressional ProcessAnother issue to be aware of is that many provisions of the Republican-passed Tax Cuts and Jobs Act of 2017 (TCJA) will, without congressional action, expire. For example, all of the changes made to individual tax provisions expire at 2025. Although the business provisions of TCJA are all permanent, a handful become more expensive for corporate taxpayers, starting as early as 2022.

Created in the 1974 Budget Act, budget reconciliation is a congressional process by which both houses pass a budget resolution, which simply sets budgetary goals for a fiscal year, including targets for revenue, spending and debt. The budget resolution and subsequent reconciliation bill are not subject to the 60-vote filibuster threshold in the Senate and can pass with simple majorities in both houses of Congress. The resolution includes reconciliation instructions for specific committees to report legislation that bring current law into the resolution's stated goals.

This budget reconciliation process is subject to several rules related to both the process for floor consideration and limits on the inclusion of "extraneous matters." On the Senate floor, a motion to proceed to the reconciliation measure is not debatable – meaning it is also not subject to filibuster. Debate on the reconciliation bill itself is also limited to 20 hours, ensuring that it will be considered in a timely manner.

The limits on extraneous matters come from the "Byrd Rule," created by former Sen. Robert C. Byrd (D-W.Va.). Under the Byrd Rule, any senator may raise a point of order to strike "extraneous matter" in a reconciliation bills or instructions, and the rule can be waived only with the support of three-fifths of senators. The specific Byrd Rule definitions of "extraneous matter" that could affect tax provisions are:

Of these, one of the most important that can affect tax measures in a reconciliation bill is the prohibition against tax policies that have "merely incidental" revenue changes as compared to the non-budgetary (i.e., policy) components. Another is whether a tax change would decrease revenue beyond the reconciliation bill's budget window.

These components of the Byrd Rule often limit what tax writers will put into a reconciliation bill, and also allow the minority the opportunity to kick provisions out by seeking a ruling of the Senate Parliamentarian.

It should be noted that some have proposed that the Senate abolish the legislative filibuster, which would obviate the need for the budget reconciliation process and its limitations. Given the 50-50 split in the Senate, and reluctance to undertake such a major change to Senate procedure by more moderate and institutionalist senators, this path currently seems unlikely.

Although congressional Democrats and the Biden campaign have placed significant focus on tax proposals, 2021 promises to be a busy year for Congress and the Biden Administration on time-sensitive issues such as combating the COVID-19 pandemic, economic stabilization and recovery, and domestic instability.

Undoubtedly, changes to the tax code are ahead. Businesses and individuals should play close attention to how the proposals and congressional processes come together in the upcoming months. Waiting until a tax measure is being written or debated is often waiting too late – early engagement with the administration and members of Congress can be critical to informing policymakers and helping shape policies that may become law.