M&A market observers looking for evidence of the recent softening in global M&A activity should look no further than the oil & gas sector. 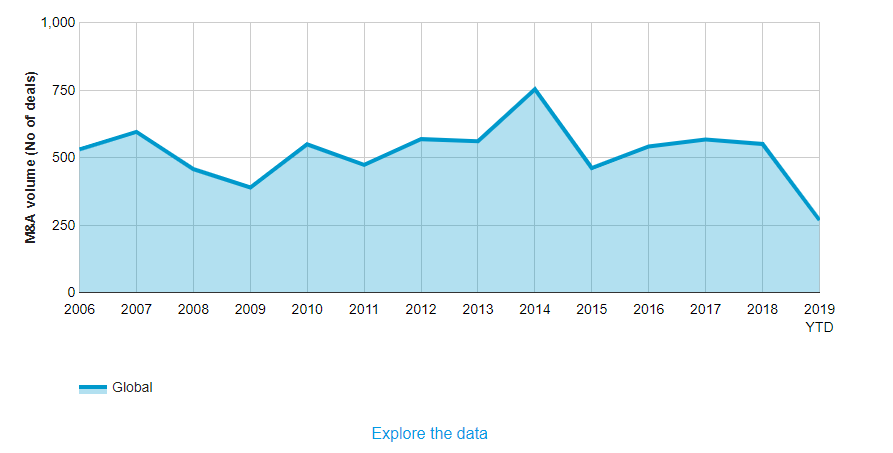 This disparity in year-on-year M&A activity is closely tied to the oil price over these respective periods. In the first nine months of 2018, dealmakers in the industry took advantage of a steadily rising oil price and a return to confidence to execute strategic M&A moves, before crude once again collapsed in Q4 2018. Over the last 12 months, Brent crude prices have fallen from a peak of around US$84 per barrel to below US$60, with volatility in-between. The ensuing pricing uncertainty has not been conducive to M&A.

In an attempt to stabilize oil prices, OPEC producers agreed to reduce output by 1.2 million barrels a day at the beginning of 2019. In July, the group of the world's largest oil producers recommitted to the pullback, extending cuts to March 2020. These measures have so far had minimal impact.

Economic warning signs over the last year have also played their role. Reduction in economic activity has historically correlated with lower energy demand, and flat to negative manufacturing output in a number of key geographies such as the US, China, Germany, the UK and India has indicated weak demand for goods. This has been attributed to the ongoing disagreement between the US and China and other trading partners, which has dampened exports and economic growth.

In a sign of the times, a highly anticipated auction of Brazilian offshore oil reserves, which hold up to an estimated 8 billion barrels of crude, was met with a muted response in early November. This was the second time that oil majors snubbed the sell-off.

Undoubtedly Brazil has internal political and governance issues that go some way to explain the lack of interest. However, oil companies are also under more pressure than ever to justify the viability of long-term projects, especially when it comes to costlier production methods, such as offshore drilling, given volatile prices.

Concerns regarding the future of fossil fuels are beginning to be felt in the global investment community. Royal Dutch Shell in December 2018 announced changes to the way it compensates senior management. The Anglo-Dutch operator aims to halve its carbon emissions by 2050 and has linked executive pay to meeting those targets. The move has been linked to consistent pressure from the investor-led coalition Climate Action 100+, whose signatories collectively manage some US$32 trillion in assets.

Europe as a whole has been leading the charge in this respect. Since 2010, European majors have closed seven times as many deals with renewable electricity and storage companies as have their US counterparts.

The (long) road to clean energy

Nevertheless, the addition of clean sources to the mix will not happen overnight, and a growing global population will ensure demand for fossil fuel production for the foreseeable future. One area that has been expected to consolidate is the upstream space, where returns have been hard to come by and companies are implementing efficiencies via scaling. The best example of this is Occidental’s acquisition of Anadarko for US$54.4 billion (including net debt), the largest deal of the year so far, after a bidding war with Chevron for the asset.

While some oil & gas firms are looking for increased size in the upstream space, others are attempting to diversify. The Middle East is one area of focus. In Q1, Saudi Aramco committed to invest US$70.4 billion (net debt inclusive) in the acquisition of a 70% stake in petrochemical firm Saudi Basic Industries (Sabic). The Sabic deal enhances Saudi Aramco downstream investments in the production of a range of chemicals including olefins, ethylene, engineering plastics and their derivatives, and access to additional international markets.

This diversification play comes as Aramco has filed its prospectus for what is expected to be the largest IPO in history, with market cap estimations ranging from US$1 trillion to US$2.5 trillion. In its prospectus, Aramco noted that it may incur costs and be forced to invest away from hydrocarbons in the future, in light of internationally coordinated climate policies.

In the meantime, oil companies have grown accustomed to a challenging oil price environment and heightened environmental, social and corporate governance (ESG) concerns. Pressure to refine asset portfolios, including the increasing move away from legacy assets in favor of cleaner alternatives but also straightforward rationalization in what has been a persistently challenging cashflow environment, will provide ample deal opportunities.

And if the oil price continues its gradual (albeit bumpy) recovery seen in 2019, this could support a commensurate recovery in oil & gas M&A activity.