An author of Star Trek episodes teamed up with fellow Trekkies at ComicMix LLC to publish Oh, the Places You’ll Boldly Go!, an illustrated book that combined Star Trek characters with the stories of Dr. Seuss.  Boldly used elements and illustrations from Seuss’s books Oh, the Places You’ll Go!, How the Grinch Stole Christmas! and The Sneetches and Other Stories.  Dr. Seuss Enterprises, L.P., owner of the intellectual property in Dr. Seuss’s works, objected to the mashup book and sued ComicMix LLC for copyright and trademark infringement and unfair competition.  The district court agreed with ComicMix that Boldly constituted a fair use of Seuss’s copyrights and granted summary judgment in ComicMix’s favor on the copyright claims.  On appeal, however, the Ninth Circuit concluded that all of the statutory factors of the fair use defense weighed against ComicMix and reversed the district court’s copyright ruling, but affirmed the lower court’s trademark analysis

First, the court analyzed the purpose and character of Boldly’s use of Seuss’s works, including whether Boldly was a transformative work.  Although ComicMix asserted that Boldly was a parody of Go!, Boldly did not ridicule or critique Go!.  Instead, Boldly focused on Star Trek characters and their adventures while evoking Go! by copying and repackaging Dr. Seuss’s “characteristic style” and illustrations.  Consequently, Boldly was neither a parody nor transformative.  Further, Boldly copied Go!’s illustrations, meaning, and message, and did so for a commercial purpose.  The Ninth Circuit thus concluded that the first factor weighed definitively against fair use. 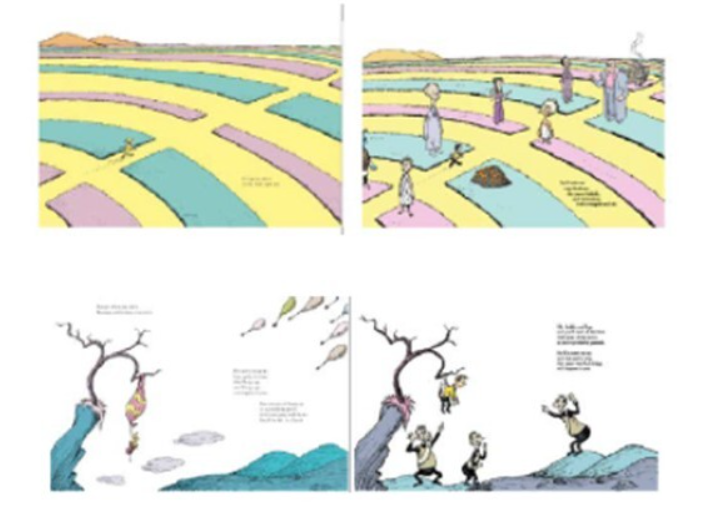 In addition to a quantitative element, the third factor also has a qualitative component, which is often described as analyzing whether the copyist took the “heart,” or “the most valuable and pertinent portion” of the work.  The Ninth Circuit held that Boldly had taken the heart of Seuss’s works.  As an example, the court noted that ComicMix took the “highly expressive core” of Seuss’s Sneetches book by including illustrations of a machine from Sneetches on ten of Boldly’s twenty-two pages.  In Seuss’s Sneetches, the machine is an integral part of the story because it can add and remove divisive heart-shaped symbols to and from the stomachs of Sneetches.  Boldly copied minute details from the Sneetches machine; in fact, the illustrator stated that he “painstakingly attempted” to make the machines “identical.”

The machine from Sneetches (left) and Boldly (right)

The court concluded that ComicMix lacked justification for the substantial quantity and quality of its copying, especially considering that Boldly did not parody or transform Seuss’s works, and instead was a commercial exploitation.

For the fourth factor, the Ninth Circuit considered the potential market for, and value of, Seuss’s works.  Seuss’s books have remained very popular and, for decades, Seuss authorized numerous derivative works.  ComicMix planned to capitalize on Go!’s popularity during graduation season by scheduling Boldly’s publication “in time for school graduations.”  Noting Seuss’s frequent collaborations and authorized licensing throughout the year, the court held that Boldly was likely to target and harm Seuss’s market for derivative works.

Because Boldly was an unauthorized and non-transformative work, ComicMix did not prevail on its fair use defense.  Accordingly, the Ninth Circuit reversed the district court’s grant of summary judgment on Seuss’s copyright infringement claim.

Finally, the court affirmed the district court’s grant of summary judgment in favor of ComicMix on Seuss’s trademark infringement claim.  The court held that dismissing the trademark infringement claim was proper because the use of Seuss’s registered and common-law trademarks (including in the title of Go!, the alleged “Seussian style of illustration,” and the claimed “Seussian font”) was not explicitly misleading.  Under the Rogers test, the Lanham Act does not apply to the use of trademarks in an expressive work (like Boldly) unless the use is not artistically relevant, or if the use is explicitly misleading.  Boldly satisfied the low threshold for artistic relevance, and the use was not explicitly misleading because Boldly listed the authors’ names on the cover and contained new expressive content.