PFAS compounds are not the first emerging contaminants to be addressed by environmental agencies, scientists, regulated entities, engineering consultants and lawyers. Chlorinated solvents, polychlorinated biphenyls (PCBs), mercury, and other organic and inorganic substances have at one point or another been considered “emerging” from scientific and regulatory perspectives.

As a general matter, all of these substances were at the time of their development very effective for their designed uses. Overall, there were not concerns about these substances being potentially harmful contaminants in the environment until well after their manufacture, distribution and use for many years. While each of these potentially hazardous contaminants evolved differently, and have certain unique characteristics, there are nevertheless some lessons to be learned from this historical perspective as we address PFAS compounds as the latest emerging contaminants.

PCBs, for example, were widely used as a fire preventive and insulator in the manufacture of electrical equipment because of their ability to withstand exceptionally high temperatures. PCBs were manufactured in the United States for about 50 years until they were banned by EPA because of evidence of environmental persistence, bioaccumulation/biomagnification, and adverse health effects in humans and wildlife. 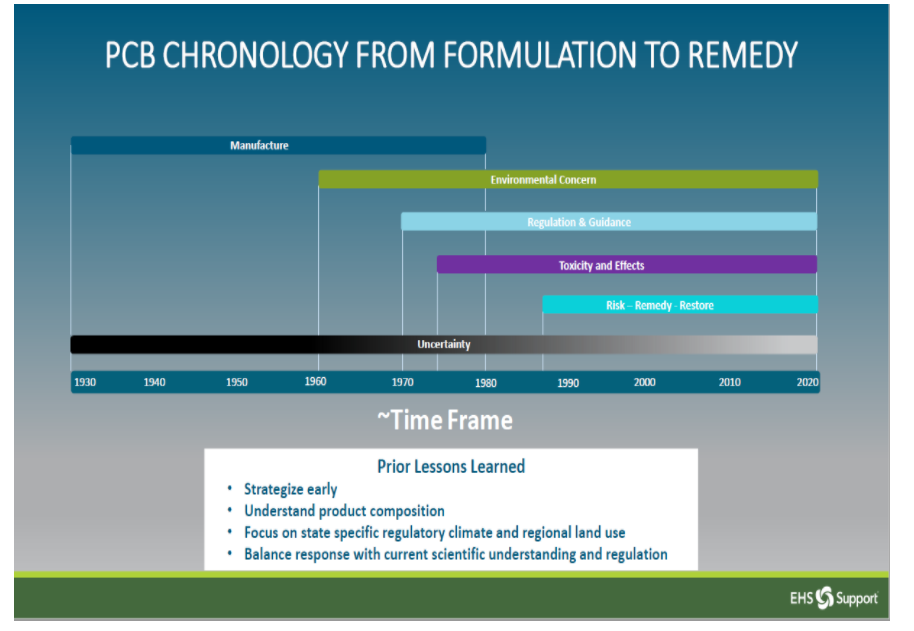 As depicted in the above graphic from EHS Support, regulations governing PCBs were established years before toxicity assessments were completed and decades before the development of effective, risk-based remedial options. It has taken roughly 30 to 50 years to sort out what a reasonable remedy might be; and while remediation of PCB contaminated sites is ongoing, the regulated community is still learning.

Similar to the PCB chronology, but with a much-compressed timeframe, regulations addressing PFAS and state-specific sampling requirements are outpacing the science. As a result, our experience is that these regulatory actions have increased uncertainty at the site level, which in turn leads to risk communication and risk perception issues that are difficult to navigate. Learning from our experience with the formulation to remedy of PCBs and other environmental contaminants, it is important for site owners with potential PFAS issues to:

Site owners cannot ignore potential PFAS concerns, but also should not panic. Site owners need to be aware of the regulatory and scientific uncertainty surrounding these contaminants, and apply lessons learned from the history of analogous contaminants. Well thought out, forward looking, site-specific strategies, focused on actual risk-based pathways, should be guided by good data-driven decisions and this historical perspective.