Recommendations from the Rosewell Review - how can planning appeal inquiries be made quicker and better?
Blog UK Real Estate Development Notes

A publication that has caught the attention of many in the industry this week is the government-commissioned ‘Independent Review of Planning Appeal Inquiries.’ The review, chaired by economist Bridget Rosewell CBE, was tasked in June last year with assessing how planning appeal inquiries could be made quicker and better. The report makes 22 recommendations aimed at reducing the time it takes to conclude planning inquiries, while maintaining the quality of decisions.

On average, around 315 planning appeals each year are the subject of an inquiry. Around 19% are decided directly by the Secretary of State and the rest are decided by planning inspectors on the Secretary of State’s behalf. In 2017/18 over 42,000 residential units were the subject of an inquiry, of which just over 18,600 units were allowed. Somewhat surprisingly, the report concludes that the scale and nature of a scheme does not primarily determine the timeframes. Instead, it is the way the system operates and the actions of the parties involved.

Last year it took an average of 47 weeks to receive a decision on inspector-decided cases. For recovered appeals, the time from validation to issue of the Secretary of State’s decision was 77 weeks and 76 weeks for called-in applications. Key factors underpinning the delays include out-dated administrative processes, poor information technology, a back-loaded process, the restricted availability of suitable inspectors, and a flexible approach to timescales which inevitably lengthens the process. If the recommendations in the report are all taken forward, it is envisaged that the overall timeframe from receipt of an appeal to a decision should be between 24-26 weeks for inspector decided cases – that’s almost half the time it takes currently.

The report identifies three main areas of improvement: (1) earlier engagement by all parties; (2) greater certainty about timescales; and (3) harnessing technology to improve efficiency and transparency. 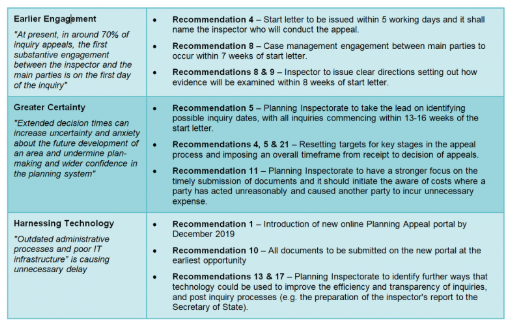 So where does this leave us? All of the recommendations, with the exception of Recommendation 3, can be achieved through changes in guidance and procedure and it is hoped that these can all be delivered on within the next 18 months. Recommendation 3 proposes a requirement on appellants to give local authorities 10 working days’ notice of their intention to submit an appeal. The new process will require an amendment to the Town and Country Planning (Development Management Procedure) (England) Order 2015 Regulations.

It will be interesting to see how the Secretary of State decides to take forward these recommendations. One of those recommendations is that that the Planning Inspectorate should prepare an Action Plan by April 2019, with an initial target date of September 2019 for some of the intermediate milestones. The report states that the organisational measures to achieve the timescale targets and wider improvements should be in place by June 2020. That’s 67 weeks away – less than the current average time it takes for a decision to be issued on recovered appeal or called-in application!