Section 45Q of the Internal Revenue Code of 1986, as amended, provides a federal tax credit for the sequestration of carbon oxides and certain other greenhouse gases captured from an industrial source that would otherwise be released into the atmosphere as an industrial emission. Section 45Q was originally enacted in 2008 to provide a credit for the sequestration of carbon dioxide (CO2), but it did not achieve widespread utilization by CO2 generating industries and their financing partners due to an annual aggregate program-wide aggregate cap on available credits. As a result of amendments in 2009, and more recent revisions under the Bipartisan Budget Act of 2018 (BBA), the program-wide cap was removed and the applicability of the credit has been broadened to cover the sequestration of all “qualified carbon oxides” (CO), such as methane, not just CO2. The amount of the credit has also been increased for CO captured with equipment placed in service subsequent to the BBA from $10 to $35 per metric ton for sequestration through enhanced oil recovery (EOR) and certain other uses and from $20 to $50 per metric ton for pure sequestration projects. The credit applies to CO captured from industrial sources or directly from the atmosphere and permanently sequestered in underground storage.

Section 45Q delegates to the Treasury Secretary, in consultation with the EPA, the authority to promulgate regulations for determining adequate security measures for the storage of CO, and project sponsors and potential tax equity investors have been eagerly awaiting such regulations in order to have sufficient certainty to move ahead with securing financing for and constructing long-planned projects. Many observers predicted guidance by the end of 2019, but it has yet to materialize. As Section 45Q tax credits are critically important to unlock the nascent carbon capture, utilization and storage (CCUS) market, and projects are required to commence construction prior to January 1, 2024 in order to qualify for the credit, the release of the IRS regulations and guidance is eagerly awaited by the market. As CO2 has been used for EOR for decades, projects that capture industrial CO2 emissions for EOR are expected to dominate the first wave of CCUS projects after the implementing regulations are issued.

To qualify for credits under Section 45Q, CO used in EOR must be “disposed of by the taxpayer in secure geological storage” (including, in principle, the rock formations in the oil or gas field where the CO is used). In addition:

Amount of the Credit

Section 45Q(a)(3) and (4) allow a credit equal to the “applicable dollar amount” (as determined under Section 45Q(b)(1) and as defined below) per metric ton of qualified carbon oxide captured by the taxpayer using carbon capture equipment which is originally placed in service at a qualified facility on or after the date of the enactment of BBA during the 12-year period beginning on the date the equipment was originally placed in service. The “applicable dollar amount” differs depending on the manner in which the captured CO is used or disposed of by the taxpayer. The IRS and Treasury Department have published Notice 2018-93 that sets forth the applicable dollar amounts, which are illustrated below in Figure 1. 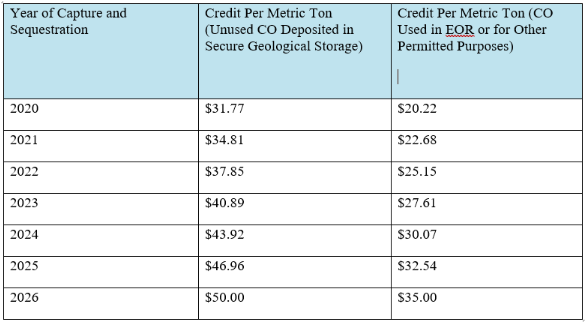 Limitations for equipment placed in service before February 9, 2018

There is an exception, however. The owner of a facility may elect to treat such equipment as if it had been placed in service on February 9, 2018 for purposes of Section 45Q, if:

Who Gets the Credit?

Under Section 45Q, the credit is attributable to either:

The latter option will require an explicit election and is not available with respect to equipment placed in service before February 9, 2018.

In contrast to prior law (which limited the credit to only the taxpayer that captured and stored the gas), this modification makes the Section 45Q credit appealing to companies and investors that would otherwise have no means of using the credit, paving the way for new business models and investment structures. In particular, we expect that tax equity should be able to finance the construction and installation of CO capture and processing equipment through the mechanism of joint ventures between CO emitters (such as a power plant, ethanol plant or similar business) and CO consumers (i.e., exploration and production businesses involved in EOR) or entities specializing in the sequestration and storage of CO.

The IRS announced in May 2019 that it anticipates issuing regulations and other guidance to implement Section 45Q. Issues on which it requested comments include:

The IRS has also requested comment on the factors that should be evaluated when analyzing the transfer of the credit to the party that disposes of the CO, as well as whether guidance is needed regarding partnership structures involving investors and developers who seek to enter into project partnerships that will allocate the credit.

Guidance on all of these points is crucial for project sponsors and potential tax equity investors, and is expected to unlock significant project and financing activity as soon as it is released.

The Section 45Q credit, as expanded by recent legislative action, is poised to spur investment in carbon capture, utilization and storage projects (and technology) at generating plants and industrial sites. The ability of the owner of the capture equipment to transfer the credit to the CO user or to effectively monetize it through seeking tax equity financing for the acquisition and construction of such equipment and related infrastructure will undoubtedly lead to an increase in project and project financing activity, building upon traditional tax equity financing structures (such as partnership flip structures and inverted leases), established in other tax equity financed sectors (such as wind). These projects will include novel features based on the specific requirements of Section 45Q, the specific and varied attributes of CCUS projects as well as the opportunity for certain CCUS projects to also benefit from other available incentives, such as California’s low carbon fuel standard credits.

However, the market requires the certainty of guidance from the IRS, so that project developers and investors can model their projects appropriately. Areas that are most in need of clarification are the manner of making the election to transfer the credit, recapture triggers and liability, the appropriate framework and process for demonstrating secure geological storage of qualified CO captured from a qualified facility, and the definition of “beginning construction”. Questions also remain regarding alternative “permitted uses” of CO, which may include various types of photosynthesis and chemosynthesis processes, chemical conversions, and other commercial uses (e.g., using captured carbon oxide in synthetic fuel production). Other technical issues regarding how one “contractually ensures” disposal of carbon oxide and whether the existing “begin construction” requirements translate to the carbon capture industry remain open.

In addition, more nuanced questions will inevitably arise as a result of the historically risk-averse mentality of tax equity investors. These issues will only be more acute where they arise in the context of a newly developing segment of the tax equity market that includes projects that are likely to be varied and to have risk profiles that are meaningfully different from the risk profile of traditional tax equity financed sectors, such as wind and solar power generation. Mitigating these varied risks from the perspective of tax equity and project sponsors may require creativity and the deployment of various methods, including both well-known methods from the wind sector and novel methods to address the particular risks of CCUS projects.