In many African countries, political transitions and economic reform initiatives have supported investor confidence and are predicted to contribute strongly to business and investment activities going into the second half of 2018. Sub-Saharan Africa experienced a palpable sense of economic optimism motivated by the political transitions and economic policy reforms introduced by the new investor-friendly administrations in Angola, South Africa and Zimbabwe.

Rapid growth has particularly been notable in non-resource intensive economies such as Ghana, Ethiopia, Cote d’Ivoire, Djibouti, Senegal and Tanzania, which rank among the world’s top 10 economies of 2018, according to the World Bank.

East Africa experienced robust economic growth in the past few years, averaging 5.9% in 2017, and forecast to continue accelerating in 2018 and 2019. Growth in the region is favoured by a rebound of agriculture from last year’s drought, strong household consumption, as well as public investment in infrastructure and mineral exploration and exploitation.

The growth outlook for the North African region is more favourable than other regions, aside from East Africa, with average growth projected at 5.0% in 2018. However, the geopolitical tensions and slower pace of reforms, as well as renewed volatility in oil prices constitute key downside risks.

The signing of the African Continental Free Trade Area (AfCFTA) by 44 countries, in late March this year, was a historical moment for the continent. The AfCFTA aims to create a single, liberalised and diversified African market for goods and services, which will constitute a more balanced and sustainable export base. Some of the most anticipated benefits of the AfCFTA include a new, dynamic business climate driven by free movement among member states, accelerated infrastructure development, and increased inflows of foreign direct investment (FDI).

Another key progressive trend across Africa is the scaling of digital technologies, with data, design and the emerging fintech sector driving technological advancement. Africa’s underdevelopment provides huge opportunities for technological innovation. While the continent remains the leader in mobile money, with annual revenue of over US$22 billion, blockchain technology and cryptocurrencies are advancing conspicuously and transforming the way Africa does business.

The energy sector has also seen innovations in renewable energy across the continent. Out of the 168GW of total capacity that was installed in 2016, 33GW was renewable energy. The African Development Bank (AfDB) estimates yearly investment requirements of around US$65-90 billion in order to achieve universal access to electricity across the continent by 2025. The alternative energy sector thus presents an unprecedented opportunity for investors to consider. 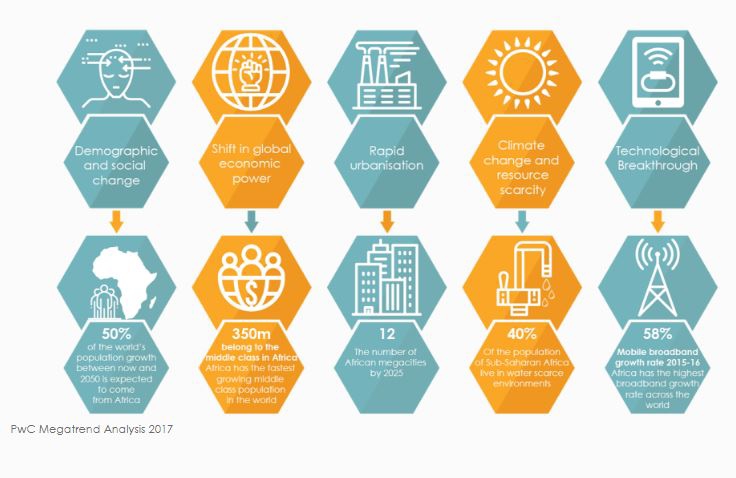