Québec’s Ministry of Finance (Finance Québec) has introduced new rules regarding the disclosure of nominee agreements, effective May 17, 2019. The new disclosure requirement will affect virtually all nominee agreements involving one or more parties subject to Québec taxation.

As outlined in our e-communication of May 21, 2019, the following nominee agreements must be disclosed to Revenu Québec within the following timelines:

In announcing the new disclosure requirement, Finance Québec did not define the term “tax consequences,” and, therefore, the scope of the term may remain unclear until such time as draft legislation is released. That being said, Revenu Québec has just recently confirmed that it interprets the term “tax consequences” to refer only to income tax consequences in respect of which Revenu Québec has jurisdiction (and not other tax consequences such as sales or land transfer taxes), but has also indicated that it will interpret the new requirement broadly to apply to a number of common arrangements in which nominee agreements are used, such as

Please note that failure to comply with this new disclosure requirement will result in penalties (including some penalties that accrue daily), as well as the suspension of the limitation period for reassessments until such time as the disclosure requirement is complied with. Accordingly, we recommend that you make any required disclosures of nominee agreements as soon as possible and, in any event, no later than

We are attaching a sample letter that you can complete for this purpose until such time as Revenu Québec publishes its prescribed form, along with an English translation of the sample letter (note that the French version should be used for all taxpayers that are not individuals). 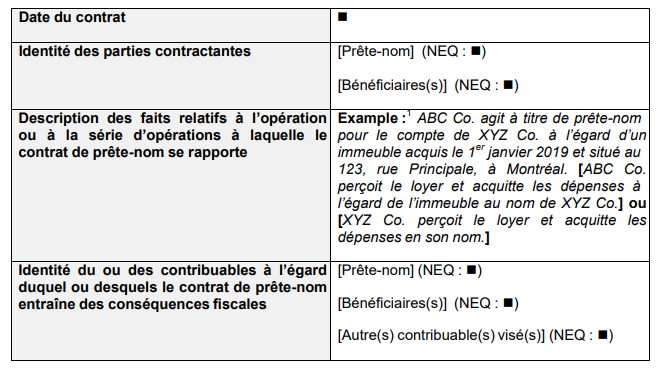 [English Letter Permitted for Individuals Only]

RE: Disclosure of Nominee Agreement

To whom it may concern :

In accordance with the requirements set out by the Ministère des Finances du Québec in Information Bulletin 2019-5, and in the absence of a prescribed form, this letter is to inform you that a nominee agreement was entered into between the parties listed below: 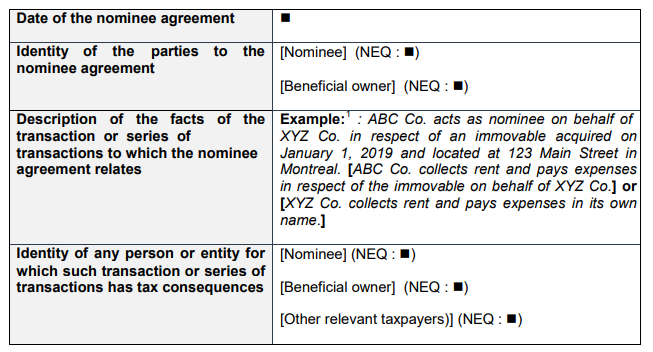 We trust the foregoing is to your satisfaction, and remain,