A 2017 survey showed that just 3% of airline chief executives are female, against the FTSE 100’s 7% at the same time. As of the middle of 2018, only 12 of the 286 IATA member airlines were led by women – a mere 4%. And with the future of Flybe under question at the time of writing, this number may yet be reduced.

Gender disparities within certain professions in aviation are not news – the UK’s new gender pay gap reporting regime has made this clear in relation to pilots in particular – but the absence of female leaders on the business side points to more problems. We hear from conference speakers and roundtable discussions and others in the industry that this is a ‘pipeline’ issue – just give it time, we are told. It’s a generational issue, and the female leaders are still coming through the pipeline. The problem will correct itself eventually. 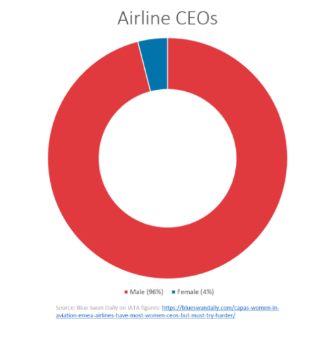 Pilots need training in a very specific set of skills, and it is (unfortunately) easy to see why the number of female graduates with this training coming through the ‘pipeline’ is comparatively low (see our previous discussions on this here). But the core skills needed to lead an aviation company – whether it be an airline, a lessor, a manufacturer, a fund, an arranger, an MRO or anything else – are the same as those needed to lead in business generally. They are not sector or industry or asset specific. With this advantage, why are the numbers still so low?

The female leadership statistics are especially surprising in the context of progress made elsewhere. FTSE 100 boards finally achieved the rate of 30% female representation in September this year,[1] and the Financial Times reports that participants on courses in its 2018 global ranking of the top 100 MBAs are 37% female. This would seem to suggest that the female business leadership ‘pipeline’ generally is in a reasonably healthy state.

Still more concerning is the fact that the skills required to lead a business don’t necessarily need to come from business-specific training like an MBA programme. Rene Banglesdorf, for example, studied journalism, and is now the founder and CEO of Charlie Bravo Aviation and International Aviation Womens Association board member. Dame Helena Morrissey, head of Personal Investing at Legal & General Investment Management and founder of the 30% Club, read philosophy. CEO of Goshawk Ruth Kelly studied commerce and accounting.

The skills required to excel in business and leadership can clearly come from an exceptionally broad range of professions and qualifications – not just those who have studied STEM subjects or have a background in aviation – which makes it even more puzzling that so few of the so many qualified women have either stayed in or moved into aviation.

(Although, for the record, aviation-specific training may not make this easier – Flybe CEO Christine Ourmières-Widener is a trained aeronautical engineer and reports that even now she ‘finds men patronising her, avoiding technical terms in case she does not understand them.’)

How can we catch up?

Mason Hayes & Curran’s Gender and Diversity in Aviation Survey from this time last year makes some interesting observations about the perceived ‘glass ceiling’ in aviation organisations, as despite 63% of their respondents saying that more than 30% of their company’s employees were female, 74% of respondents reported that their immediate superior was male. “This points,” they observed, “to issues around female employees not being able to climb the ladder and access senior management roles”,[2] even if the 30%+ of female employees might be considered a ‘pipeline’. 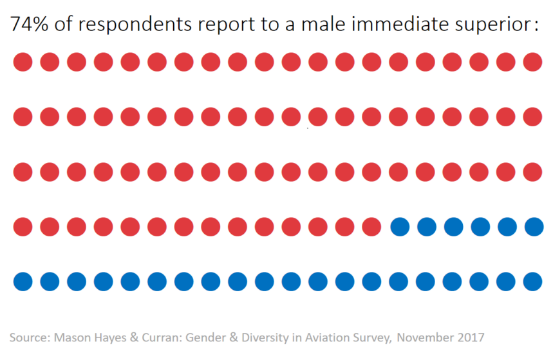 Female pilots should also have an advantage over their business-side counterparts in terms of pipeline building, for at least two reasons. The first is that they will be in demand: Boeing has forecast that 790,000 new pilots will be needed over the next 20 years, and with airlines and academies starting to set themselves ambitious gender parity targets (see Qantas, for example, delivering the message from school visits onwards), there is reason to hope that female pilot numbers will improve. The second reason is that female pilots are visible, identifiable and comparatively glamourous role models. Children and young people know what pilots do, they recognise uniforms, and they register the cool factor without needing explanation – being a pilot is something they can understand and aspire to, and then plan for with their subject choices.

But it is much harder (not impossible, but harder) to package being a business leader, a manager, a financier, or even a CEO in a way that appeals to young people. ‘Business’ is not easily defined in shorthand and does not always enjoy the best of reputations – and who dreams of being another commuter in a suit swiping around a spreadsheet? In terms of demand, it is difficult to imagine a realistic scenario where the supply of male business leaders is insufficient. And even if the female leaders were present in large numbers, how do we attract them to aviation? What industry forces will correct our gender leadership gap?

What aren’t the statistics telling us?

The reports and surveys don’t tell us why women who are qualified and willing and able to lead businesses successfully might not choose – or choose to stay in – aviation. The same Mason Hayes & Curran study found that when asked whether their company had a gender and diversity committee, only 37% of respondents answered “Yes”. Aviation organisations come in different shapes and sizes, but we can still infer from this that closing the gender gap in employee numbers generally is not necessarily front of mind for a lot of us, let alone closing the gender leadership gap in the C-suite. As the chair of the Hampton-Alexander Review of gender balance on FTSE 350 boards has noted, “We still have hundreds of companies that don’t seem to be switched on to this.”

Establishing formalised committees and reporting channels might help aviation organisations to identify the problems causing the observed ‘glass ceiling’ and galvanise momentum towards solving them, as well as increase the industry’s reputation for self-examination and vigilance in a way that makes it more attractive for future leaders of both genders. Some have pointed to the need for greater diversity in recruiting, and others to the crucial role of female mentoring. These are all important methods of improvement, but we have heard this before. We need to do more, and do better.

As an example, our own firm is very active in this space and our initiatives are often reported in the legal or other industry-specific press. We have a Women’s Initiative Network, development grants, programmes to ‘empower’ and mentor members of our leadership pipeline, schemes to assist those returning from lengthy absences, and nominated representatives in most offices that we can speak to. The firm also founded The 1973 Club, which is a networking and philanthropic group working towards gender parity in the private equity industry, and we have some high-profile leaders in the field to look to. This is an impressive array of initiatives by any measure.

As a firm, we are good at identifying gaps, and we are good at identifying the right people with the right energy and skills to fill those gaps. What we need to improve on is communicating the opportunities available to those who might be considered part of the leadership pipeline, to better mobilise our global muscle and internal momentum so that our future leaders can more fully engage with the options available to them.

The best way forward will be different for each organisation, each one with its own unique combination of personalities and challenges. Some might work best with regular scheduled discussions, others with formalised mentoring or committees, others with quotas, and still others might have been founded by women in the first place. But we all need to think about this with a view to actually moving the dial, rather than just ticking boxes to comply with legislation, and with the same rigour we would apply to any other aspect of our business.

There is a clear business imperative to fix the gender leadership imbalance: profit margins are 5% higher at FTSE 350 companies where executive committees are at least 25% female, and it is estimated that if all of the FTSE 350 performed at that level, they would be setting themselves up for a £13 billion dividend. But even this incentive will not serve as a solution in isolation, especially if the leadership pipeline is not yet fully in place and senior management is not fully engaged.

Although we recognise that there is no ‘silver bullet’ when it comes to resolving gender disparity in any industry, we all – regardless of gender – have a role to play in making the issues part of the mainstream conversation and of mainstream business strategy. And as aviation in particular is one of the closer and more collegiate global industries, we have a real opportunity to step up here.