Timber Briefing: U.S. Lumber Prices Could Be Affected By Sanctions on Russia

The U.S. lumber market has seen unprecedented price rises in recent years. Prices could climb even higher as the world responds to the conflict between Russia and Ukraine. Russia is a major exporter of wood in the global market, particularly in China and the European Union. If these countries restrict wood products imports from Russia, or if Russia refuses to export to them, the strain on global supply could drive domestic prices to new heights as Russia-dependent markets look for new sources of wood.

There is already significant upward pressure on domestic lumber prices. We are in an inflationary environment, demand for building materials is high, increased regulation and catastrophic wildfire have combined to depress supply, there are skilled labor shortages and wage demands for mill and forestry jobs, and carbon reserves and credits are increasingly taking trees out of regular harvest rotation.

In this context, the impact of Russian market disruption could have an outsized impact. Russia is a significant player in the world wood products market. In 2020, Russia exported over US$8 billion in wood products, making it the world’s fourth largest exporter. In 2021, that number rose to US$12 billion.

Asia and Europe are Russia’s primary export markets. Roughly 40% of Russia’s exports go to China—over US$3 billion in 2020, with Finland (US$539 million), Uzbekistan (US$429 million), Egypt (US$386 million), and Japan (US$369 million) also being major importers of Russian wood. Other significant importers include EU countries like Germany, Italy, Poland, and Estonia, as well as the United States, Kazakhstan, India, Azerbaijan, Korea, Ukraine, and Belarus.

Sanctions from these countries could limit or halt trade with Russia. Many countries have already restricted Russian trade, and others could follow suit. Russia has also deemed many countries “unfriendly” and will cease trade with them.The following table shows the status of sanctions in Russia’s primary wood export markets: 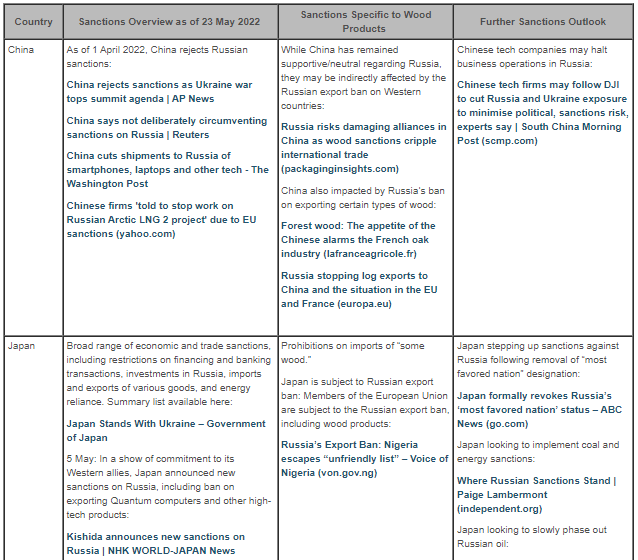 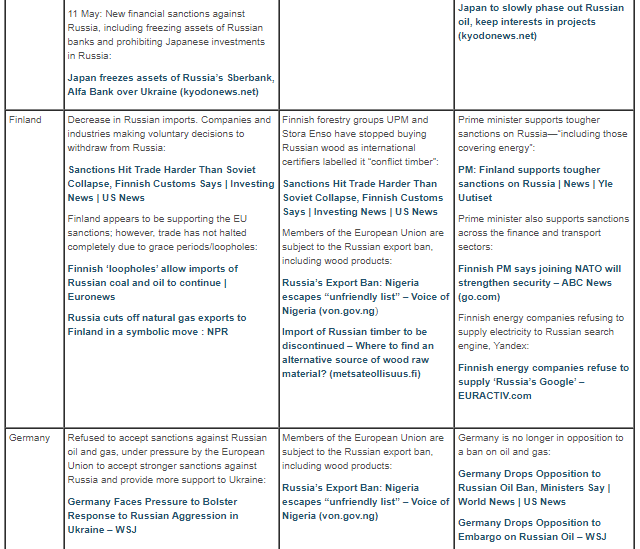 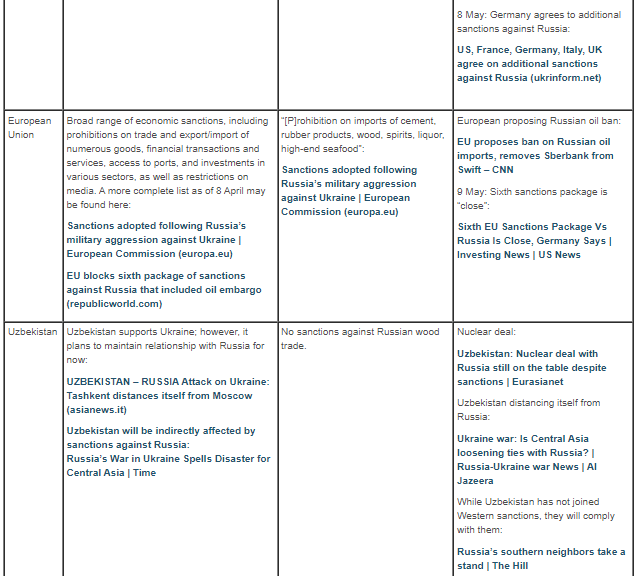 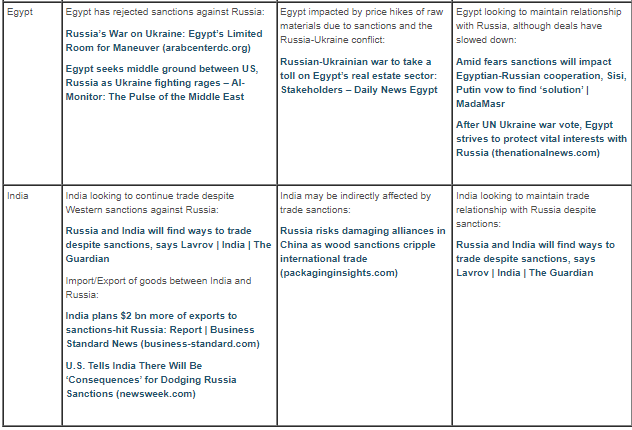 Even where countries do not take official action, individual companies may stop buying Russian wood to mitigate reputational risk. The removal of Russian banks from the SWIFT international payment transaction system will also complicate payments for exported Russian products, as well as for Russian timber harvesters, sawmills, plywood mills, and pulp mills, as they attempt to import machinery and supplies.

Other actions short of sanctions may have an impact as well. For example, in the United Kingdom, guidance published by the UK government last year to clarify the Timber and Timber Products (Placing on the Market) Regulations 2013 stated that due diligence by purchasers must include “consideration of the prevalence of armed conflict.” In early March, the Timber Trade Federation, a UK timber association, urged its members (who represent 85% of the £10 billion UK timber industry) to enforce their own trade ban on Russian timber.

Countries that restrict wood trade with Russia will be forced to look elsewhere for timber. Although they might not look first to the U.S. market, the market reverberations will eventually reach our shores and drive up demand. The market will seek out and find wood wherever it is available until eventually supply, demand, and prices adjust to meet the new geopolitical norm. If Russian wood supply exits the global marketplace, there will be a supply deficit that is likely to be filled either by increased production or price hikes.

Given this, U.S.-based timber companies would be well advised to monitor sanctions on Russian wood products as they seek to forecast market prices in the medium term. China, in particular, is worth monitoring closely. China is the world’s largest importer of wood products, and Russia is China’s most important supplier.

In addition, companies that export timber products may wish to identify export targets that might be of particular interest as the marketplace responds to Russian military action.