Change is a constant in immigration visa adjudications and drastic changes can be implemented from one day to the next without much, if any, notice. For example, the reciprocity fees for the nonimmigrant visas for Australian citizens changed drastically on December 23, 2019.[1] For example, for E-1 and E-2 treaty trader/investor visas, the application fee increased from $105.00 to $3,574.00 (a 3303.81% increase), while L-1 and L-2 intracompany transferee application fees changed from $150.00 to $1,790.00 (a 1604.76% increase). In addition, effective November 12, 2019, the maximum validity of E-1 and E-2 nonimmigrant visas for French citizens was reduced from 60 to 25 months. It is difficult to track the impact of these changes using the Department of State’s visa reciprocity archives, since the information from the prior reciprocity schedule in comparison to the new announced change(s) are not preserved. The lack of prior notice of these changes results in increasing unpredictability regarding the visa process.

What is going on with the Reciprocity Schedule Changes?

These changes are a result in part of the mandate contained in Section 10 of Executive Order 13780 issued back in March of 2017, which requires the Department of State (DOS) to review all nonimmigrant visa reciprocity agreements and arrangements to ensure that they are truly reciprocal. Section 281 of the Immigration and Nationality Act, as amended (INA), requires that visa fees shall be in amounts that correspond to the total of all “…visa, entry, residence, or other similar fees, taxes, and charges assessed or levied against nationals of the United States by the foreign countries of which such nonimmigrants are nationals….” These “reciprocity fees” are reviewed to eliminate the gap between comparable U.S. visa fees and the fees charged by a foreign country to U.S. citizens. Australian fees and charges for their equivalent to the L-1 category for a four year temporary work assignment can exceed USD$10,000.00, so there is a basis for the increase noted above, but the changes were implemented without prior public notice and were applied to visa appointment applications scheduled before the effective date of the change.

Lesson to be learned – Check the reciprocity schedule even on the date of the interview for potential surprises in fees as well as visa validity.

The recommendations contained in a July 2019 report from the U.S. Government Accountability Office (GAO) entitled, “Nonimmigrant Investors: Actions Needed to Improve E-2 Visa Adjudication and Fraud Coordination,” are already being felt at the consular application level with more to be expected in 2020. The report included the following chart regarding E visa use: 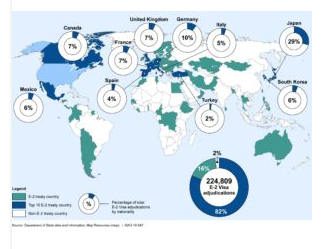 In addition, the report included the chart below, which reflects some interesting data as to investment trends in fiscal year 2018 for E-2 visas.

Figure 13: Associated Investments Reported by Principal Beneficiaries in Our Generalizable Sample Who Were Approved for E-2 Status in Fiscal Year 2018 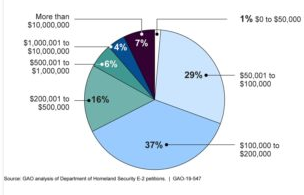 Note: This figure is based on self-reported information from principal beneficiaries (e.g., investors, managers, and essential employees) on the qualifying total investment in a U.S. enterprise. The investment may be associated with the beneficiary because the beneficiary may not have made the investment themselves, but the investment was instead made by a separate E-2 investor. The figure does not include investment information reported by dependent E-2 beneficiaries because the Department of Homeland Security does not collect such information, as it is not needed to determine E-2 dependent eligibility. The estimates in this figure are based on the results of our generalizable sample of approved fiscal year 2018 petitions and have a margin of error of +/- 12 percentage points or fewer. Percentages may not sum to 100 due to rounding.

For example, one of the recommendations made in the report was for the DOS to develop minimum standards for E-2 company registration programs, including how E-2 registered companies will be re-vetted for qualifications.

Comments by the GAO – The GAO noted that the Bureau of Consular Affairs had not provided minimum standards for E-2 company registration programs.

The report noted a different perception between DOS and U.S. Citizenship and Immigration Services (USCIS) as to the presence of fraud in E-2 visa applications.

For DOS, some of the posts had implemented the following actions to address fraud concerns:

USCIS, in contrast, for E-2 initial petitions as well as changes of status and extension petitions for E-2 status uses the following anti-fraud measures:

Changes to Expect – Based on increased cooperation and data sharing between the DOS and the Fraud Detection and National Security Division (FDNS) of USCIS, companies should conduct regular internal audits to determine if E-2 visa applications or registrations require updates or amendments. In addition, companies should expect and prepare for on site verification visits as to their E-2 registrations and visa applications for employees.