The Hells Angels are an infamous international motorcycle club. Redbubble on the other hand, is a website that allows artists to upload a variety of creative works, including images, drawings and design - which can then be applied to products (such as T-shirts) and sold to consumers. 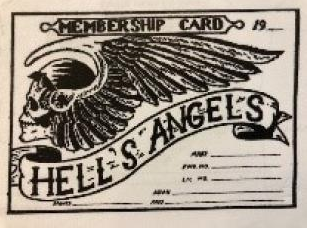 Section 239 of the Copyright Act 1968 (Cth) requires that an assignment of copyright must be in writing. There was no assignment in writing vesting the ownership of the copyright (originating in the creator of the Membership Card image) in the entity HAMC US in evidence. Accordingly, his Honour held that HAMC US was not the owner of copyright subsisting in the Membership Card image for the purposes of Australian copyright law and the copyright infringement proceedings must fail on that basis.

An interesting point arises because HAMC Aust did not seek to rely on, as proof of ownership of the copyright in Australia, the registration by HAMC US of the image entitled “Hells Angels Membership Card (1954)” with the United States Copyright Office.

It is likely that, had HAMC Aust sought to rely on the US copyright registration certificate for the Membership Card image as proof of ownership of the copyright in Australia, Greenwood J would have applied s126B(3) and presumed that HAMC US was the owner of the copyright, subject to evidence to the contrary.

Proving an exclusive licence of copyright

Redbubble argued that HAMC US continued to be engaged in decision making about the exercise of the copyrights by HAMC Aust in Australia and the licence could not therefore be said to be to the exclusion of HAMC US.

“A particular isolated act or acts across the life of the agreement, with the acquiescence of the grantee, does not render what would otherwise be an exclusive licence, an agreement characterised as one in which the grantor is to be understood, in the working operation of the document, as reserving to itself the right to undertake “acts” in the exercise of the exclusive rights vested in the owner, so as to bring about the result that the “authority” conferred on the licensee is not “to the exclusion of all other persons”.”

Greenwood J was satisfied that HAMC Aust would have been the exclusive licensee.

His Honour then considered whether HAMC Aust had standing to commence trade mark infringement proceedings as an “authorised user” pursuant to s 26 of Trade Marks Act 1995 (Cth) of various Australian trade mark registrations owned by HAMC US. An authorised user must demonstrate that it uses the marks in Australia under the control of the trade mark owner.

In Lodestar Anstalt v Campari America the Full Court held that “control” means actual control as a matter of substance, which involves a question of fact and degree. Applying the Lodestar decision, Greenwood J stated at [385] that there:

“can be no doubt that the mere fact that HAMC Aust has entered into a Licence Agreement with the owner of the trade marks conferring a right to use them is insufficient to establish control.”

However, his Honour stated the importance of carefully taking context into account. In this case, the following matters were considered relevant:

a. neither HAMC US or HAMC Aust is a major commercial undertakings dedicated to producing products with a commercial network of national and international distributors and licensees;

b. the core undertaking of HAMC US and HAMC Aust is supporting members of the Hells Angels motorcycle club; and

c. the relationship between HAMC US and HAMC Aust was one where obedience to the trade mark owner was so intuitive and so complete that no formal instruction was necessary.

His Honour held that HAMC Aust was an authorised user and had standing to sue Redbubble for trade mark infringement.

Australian companies seeking to protect and enforce intellectual property rights as exclusive licensees or authorised users of overseas companies should:

1. ensure all assignments of copyright are in writing. Confirmatory assignment documents can be prepared vesting ownership in the relevant entity;

3. ensure an agreement purporting to be an exclusive license grants the licensee rights “to the exclusion of all others” in Australia and that there is no ambiguity in the rights of owner and exclusive licensee; and