That doesn’t make much difference! - features of low importance in registered community designs

In Sanford LP v EUIPO – Avery Zeckform (Étiquettes), the European Union’s General Court has highlighted the low importance attached to features that indicate origin or are technical, emphasising how these features may be of limited use when trying to distinguish a registration from existing designs.

Registered Community designs can be used to provide protection for the appearance of products throughout the European Union. In order to be valid, these registrations must be sufficiently different from existing designs. The legal test is that they must produce an overall impression on the informed user that differs from the overall impression produced on the informed user by any existing design.

In Sanford LP v EUIPO – Avery Zeckform (Étiquettes) Case T-443/20, the General Court considered an appeal against a decision of the European Union Intellectual Property Office’s Board of Appeal. The decision had invalidated Sanford’s registration for a label roll due to the lack of a different overall impression compared to an existing design. 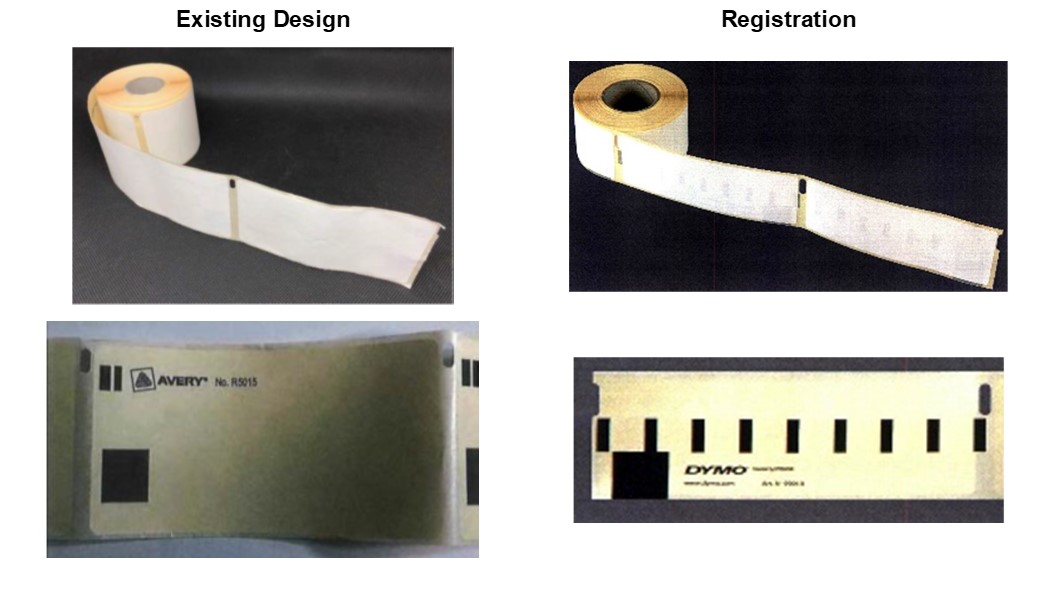 In contesting this decision, Sanford pointed to the presence of the word ‘AVERY’ and the associated figurative element (a triangle within a square) on the back of the existing design. This contrasts with a different word (‘DYMO’) in a distinct font that is present on the registration’s label roll. The General Court was not convinced that this could distinguish the designs. It stated that these elements were “marks or distinctive signs affixed to the product to indicate its origin. Those elements do not have an ornamental or decorative function and do not constitute features of the product giving the goods concerned their appearance”. It therefore concluded that these features were irrelevant to the comparison of overall impression of the two designs.

Having boldly declared that the ‘indication of origin’ features were irrelevant, the General Court then conceded that “even though those word and figurative elements could be regarded as relevant, it will be clear to the informed user that their purpose is to indicate the origin of the goods, with the result that, in the overall impression, that user will not attach importance to them and those elements will therefore, in the present case, be insufficient to alter the overall impression that he or she will have of the contested design”.

Sanford also submitted that the ‘print marks’, which are the black boxes on the back of the label strips, also contributed to a different overall impression. However, the General Court found that these blocks “were used to detect the start of the labels and therefore to initiate the printing process and control it by identifying and regulating the position, speed, timing and amount of material to be advanced”. Due to this known technical function of the print marks, it was concluded that the informed user, again, would “not pay particular attention to the differences”.

In addition to these features, it was acknowledged that there were differences in the size of the labels and thus the height of the rolls. Nevertheless, it was concluded that the rolls produced the same overall impression on the informed user and thus the General Court agreed with the Board of Appeal’s assessment that the registration was invalid.

This judgment demonstrates how features of a registration will be given different weight in the eyes of the informed user when comparisons are made to an existing design. A low weighting is given to features that indicate origin or are technical in nature. The different weight attributed to the various features will also be relevant when assessing the scope of protection provided by a registration, where an analogous assessment of the overall impression is performed.