As recently noticed in the Federal Register, the Patent Trial and Appeal Board’s (PTAB or Board) new motion to amend (MTA) procedures are now in effect as a one-year pilot program. [1] In sum, the patent owner (PO) now has the option to ask for preliminary guidance from the Board about its substitute claims in a first MTA, and can file a revised motion—with new substitute claims—after either the petitioner’s opposition paper or, if guidance was requested, after the Board issues its preliminary guidance. The revised MTA then generates a further opposition opportunity for the petitioner on a tight, six-week turnaround. In this article, we highlight important details of the new procedures, discuss the impact to PTAB practice, and provide some practice pointers to consider when forming PTAB strategy under the new procedures.

The notice in the Federal Register provides further detail, but the following passages and figure from the notice are particularly helpful in understanding the contours of the new program:

The typical schedule will be as follows, with the black and grey ovals indicating the main events under the new procedures: 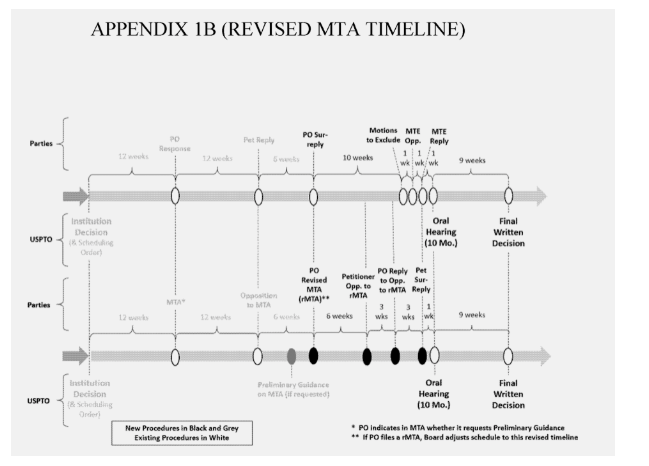 So, which PTAB proceedings are impacted and how?

Parties should form PTAB strategies with their counsel as appropriate for their unique circumstances. In doing so, they may wish to consider the following points: