Reverse break fees under the microscope

We take a deep dive into recent Australian public market transactions and put reverse break fees under the microscope.

Reverse break fees are used in control transactions to require the bidder to pay the target a fee if an event occurs (which is usually in the bidder’s control) which leads to the transaction not proceeding, for example, a failure to obtain a regulatory approval or financing failure. Importantly, a reverse break fee is a useful tool for targets to increase deal certainty - by creating a financial disincentive for bidders to walk away from the transaction.

The reverse break fee triggers differ from deal to deal, but from our analysis the top 3 triggers are:

If we look at the top 3 common triggers in each financial year, we find that the use of triggers has remained consistent over the period. 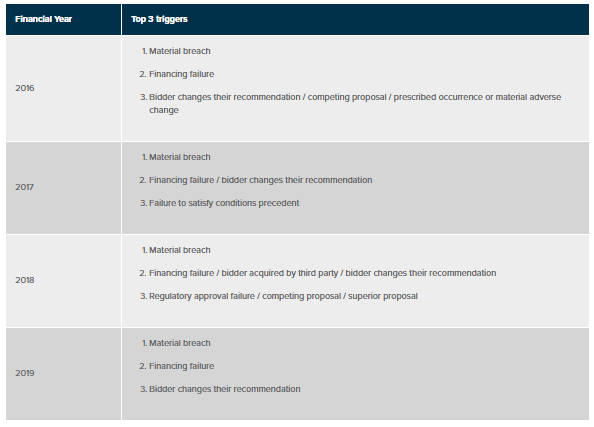 We found that it is common for reverse break fees to act as a cap on the bidder’s liability (25 instances or 64% of deals where there was a reverse break fee). Where that is agreed, the target is accepting that it cannot sue for damages, even if the bidder is in breach of the agreement.

Looking at the latest transactions that have used reverse break fees may indicate what to expect in the future.

The reverse break fee negotiated in Healthscope’s proposed $4.4 billion acquisition by Brookfield by way of scheme of arrangement and simultaneous off-market takeover bid is a cutting edge example for the Australian market. Of note, however, is that such a reverse break fee would be fairly standard in the US.

The second tier involved a $50 million reverse break fee (approximately 1.2% of equity value). The second tier would be triggered if FIRB approval was not obtained by the buyers of the approximately $2.1 billion sale of 22 freehold properties that Healthscope had agreed to sell as part of the Brookfield transaction to Medical Properties Trust and NorthWest. To our knowledge, this is one of only 3 instances where a target has negotiated a reverse break fee payable upon a failure to obtain a regulatory approval since FY16.

The reverse break fees acted as a cap on Brookfield’s liability.

The significance of the reverse break fees negotiated on the Healthscope transaction is that both tiers exceed the Takeovers Panel’s 1% guideline on break fees. The 1% guideline is based on setting a fee which is not going to deter competing bidders. That consideration does not apply when it is the bidder who must pay the fee. Therefore, a reverse break fee is not limited by the Panel’s guideline.

Although the incidence of reverse break fees has trended upwards since FY16, the structure of them being the triggers and quantum as a proportion of equity value has remained consistent. It will be interesting to see whether the reverse break fee structure in the Healthscope transaction will set a new benchmark for public market transactions in Australia, bringing the market a little closer to standard US practice.