Key considerations in drafting and negotiating concession agreements in Nigeria

Public Private Partnership (PPP) arrangements have been utilised by many countries around the globe including Nigeria to deliver public services such as seaports, airports, roads, waterways and even digital platforms used by government agencies. These arrangements are typically documented in concession agreements which vary in form depending on the needs of the parties. These agreements outline the responsibilities of each party and clearly allocate the risks of the Project. Parties to a concession agreement Effective negotiation of any contract requires knowledge of the facts and subject matter. It also requires a good knowledge of the parties, their competing goals and objectives in entering into the transaction, and a deep understanding of how to allocate the varying project risks to the party best able to bear them. The parties to the concession agreement would typically be: a. The Grantor: This would be the relevant ministry, parastatal, department or agency (MDA) of

c. Concessionaire: The Concessionaire is usually the special purpose entity created by the Project Sponsors for the purpose of executing the project. The project company as concessionaire is the holder of the concession rights granted by the Grantor. Being a creation of the sponsors, the negotiation objectives of the Concessionaire would not be much different from its sponsors. However, unlike the sponsors, the life of the Project Company is totally dependent on the success or failure of the project. For this reason, it is necessary for the project company to ensure that it can transfer as much risk as it possibly can to other third parties such as contractors, the Grantors and suppliers. Where the Sponsors are a consortium, each sponsor would like to ensure that it is only exposed to the level of its equity contribution to the project as opposed to having the cost of the entire project on its balance sheet. 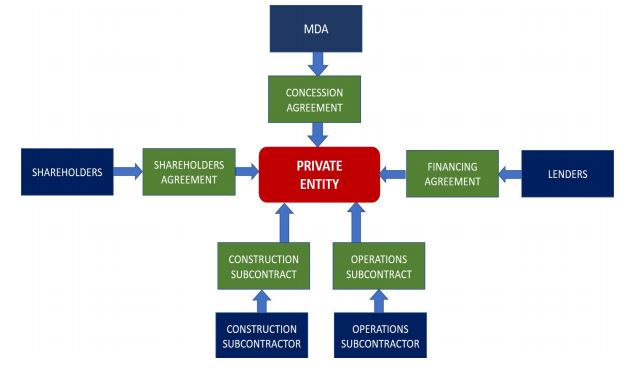 Fig. 1 Typical contractual relationship for a concession The diagram above is a graphic description of how the Concessionaire/Project Company typically

allocates risk to the diverse parties in a PPP Arrangement. As shown in the diagram, this is done through a contractual matrix. For example, through the concession agreement with the Grantor, expropriation risk is passed to the Grantor as it is the better party to handle that risk. Likewise, construction risks are passed to the contractor in an Engineering Procurement and Construction (EPC) Contract.

d. Lenders: Lenders to these projects typically include commercial banks, international development banks such as the World Bank or the African Development Bank, credit import and export banks, and private equity firms. Due to the huge capital outlay of most of these concessions, there will be debt providers in the mix of funders. Lenders are mostly concerned with the bankability of the project, which mostly requires that the project risks are allocated to the parties most able to bear it1 and that the project documents (including the concession agreement) have some relational integrity with one another. As such for the project to be bankable in the eyes of potential lenders, the project will need to pass many of these risks on to other project participants who are better placed to assume these risks. Consequently, as the lenders and their lawyers take into cognisance the terms and conditions of the concession agreement and the other project agreements, the Concessionaire, in negotiating the concession agreement must do so with lenders' requirements in mind. This typically should include the ability to assign the rights under the agreement to the lenders or their agent as well as step-in rights for the lenders in the case of a default by the Concessionaire. To this end, a direct agreement will be a key feature to be negotiated in the concession agreement.

e. Other Key Parties. In addition, other relevant parties include contractors and sub-contractors, suppliers to the project, as well as users of the concession assets.

Key Clauses in a concession agreement Although there is no standardised concession agreement that must be adopted by the parties, the Infrastructure Concession Regulatory Commission (ICRC) is actively involved in the procurement process and guides the relevant Grantor through the contract structuring and negotiating process.

The contents of a concession agreement would ultimately be dependent on the subject matter and intention of the parties. The agreement would generally be for the long lease of public infrastructure by the private sector proponent and focus on the delivery of a service in accordance with performance standards.2 The ICRC Act stipulates certain requirements that must be complied with in the contract. Following execution of the contract, the ICRC takes custody of the executed contracts, monitors the Project, and ensures compliance with the terms and conditions of the contract. Thus, the negotiating strategy to be adopted may be positional (competitive) or problem-solving (cooperative).3 In real terms, each party would have to rely on a blend of effective negotiation skills and good draftsmanship to ensure a viable midpoint that aligns the interests of the parties and allocates to them the key risks of the projects in an optimal way. Based on general requirements of a concession agreement and the ICRC requirements, the typical clauses in a concession agreement would include: a. Parties: The parties to the concession agreement would typically be the Grantor and the

Concessionaire. Other government agencies may be involved if they have a material role to play under the concession. The parties must be competent to contract, and thus issues like whether the Grantor is the government itself, a parastatal or ministry or corporation must be clarified and the proper entity adopted. This is an essential exercise to ensure the that the concession is granted by the proper instrumentality of government and all relevant approvals obtained. Also, where the Concessionaire is a foreign company, the necessity or otherwise for registration as a Nigerian company must be ascertained. Nigerian law provides that foreign companies carrying on business in Nigeria must register a local subsidiary in Nigeria for that purpose, subject to certain exemptions provided under the Companies and Allied Matters Act. b. Recitals: The recitals would usually stipulate the objectives of the agreement, explain how the Grantor came to own the property and the reason for the concession. It would also include details about the public good or service in which the grantor has requested for private participation as well as the tender or award process for the concession to show on its face that the concession was procured in accordance with extant laws. It would conclude with the goals of the transaction and what the grantor hopes to achieve by the concession. For this reason, it is important that facts in this regard are correctly recited and chronologically stated. c. Definitions and Interpretations: The parties need to consider each definition carefully to ensure that the meaning given to terms used in the agreement does not serve one to the detriment of the other party.

d. Conditions Precedent: The obligations of the parties to a concession contract to consummate the transactions contemplated are usually subject to the fulfilment prior to the effective date of certain conditions. Such conditions include execution and delivery of the contract, corporate standings of the parties, representations, warranties, covenants, payment of commencement fees, valid security, regulatory consents and permits, entering into performance bond by the Concessionaire and the period within which the bond shall be entered into. The Lenders will need to ensure they are entitled to receive a fully signed and enforceable concession agreement as a condition precedent to the initial drawdown of funds under the facility agreement.

Conclusion In trying to protect their interests, each party to a concession agreement must rely on a blend of effective negotiation skills and good draftsmanship in agreeing the key terms governing their relationship. The terms listed above are not exhaustive, however, there are other salient contractual terms which are to be found in a concession agreement, which are discussed in the last volume of this article.