How Copyright applies to AI-Generated Works

Historically, artificial intelligence was distinguished from the human by the capacity of the latter for imagination, creativity and sensitivity. However, as computer-generated literature and artwork continue to develop in sophistication, these traits seem increasingly vulnerable to the spectre of singularity.

Artificial intelligence is now capable of simulating the distinctive styles of long-deceased artists, devising speculative sequels to our favourite TV series, and producing novels worthy of nation-wide writing competitions. In these circumstances, what happens to the role of the human author?

This article discusses the implications of this trend on Singapore’s copyright law. It posits that under Singapore’s present copyright regime, computer-generated art and literature should still be protected as author’s works. However, unprecedented advances in machine learning may warrant the relegation of fully computer-generated works to the domain of entrepreneurial works.

The significance of Authorship in Singapore’s Copyright Law

According to the current law, it is therefore clear that a bot or computer program cannot be credited as an author of a copyright work. The Court of Appeal’s indication instead was that “not infrequently, in cases involving a high degree of automation, there will be no original work produced for the simple reason that there are no identifiable human authors”.[4] Have we reached this stage yet?

Copyright over Computer-Assisted and Computer-Generated Works

It is now common to find artwork or literature made with the assistance of computer programs. This could mean the use of Microsoft Word to prepare an essay, or the operation of a computer algorithm to digitally simulate the textures of actual paint. In such cases, the clear direction of a human mind and the ancillary role of the computer program as a tool does make it relatively evident that a person is the author.

In cases where the computer program is able to operate somewhat independently after some simple direction by a human, the lines are not so clear. For example, designer Greg Borenstein’s “Algorithmic Comics” are created by running a program to source for and process materials from various public repositories. However, he sets the perimeters of what the computer program searches for and selects with key words of his choosing (most of which have rather sinister undertones). 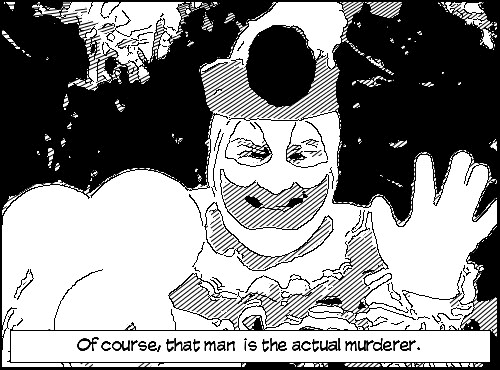 In this case, it is still clearly arguable that Borenstein is an author despite the use of a program to pull up a selection of text and images to match his initial instructions. To the extent that the limited text in the comics can be protected by copyright, Boreinstein displayed authorship by defining the ambit of what the script searched for and also reviewing the results to select captions he thought appropriate. In respect of the artistic work in the comics, Borenstein edited the images pulled up by the computer program to achieve the desired noir comic-book effect. In essence, he exercised a critical element of judgment.

Awarding authorship based on the exercise of judgment may not seem fair, when a computer program is seemingly doing most of the work. Should there be no discernable “author” as the Court of Appeal suggested in Asia Pacific Publishing, causing the work to be entirely excluded from copyright protection? In the context of Singapore’s copyright laws the answer is arguably no, for these three key reasons:

a. Over-emphasis on lack of “effort”

Reviewing the output of a computer program or typing in a few key phrases to direct its search processes may not sound like much, but the amount of labour expended is not the determining factor in whether copyright should be awarded. This has been reiterated in the recent case of Global Yellow Pages Ltd v Promedia Directories Pte Ltd, which like Asia Pacific Publishing, discussed copyright over literary works in the form of compilations[5].

The priority given to critical judgment over sheer labour is also exemplified in the award of copyright protection to derivative works. Re-purposing existing objects or even other authors’ works by giving them a new name and intended meaning can be sufficient to “transform” the existing work and justify some copyright protection for the new work.

b. “thin” layer of copyright protection

The fundamental principle that only original expressions can be protected by copyright limits the monopoly a copyright owner can claim, even in respect of computer-generated work. If a computer program is instructed to process publicly available information, then its representation of that work must be original.

For example, sports articles generated in the wave of “news botification” (news articles produced by artificial intelligence) are generally compositions of raw data into play-by-play reports on athletic events. The copyright protection available will be limited to the language and syntax used to describe those events. If generic, then copyright will be even more narrow.

The defence of independent creation is also available in Singapore, allowing content creators to resist claims of infringement if it can be proved that they produced their work without copying the complainant’s. A similar work also will not be infringing as long as it can be shown that there are substantial differences from the complainant’s.

As such, the copyright subsisting in most computer-generated works will be very limited, and should not overly prejudice other content creators in producing original works of their own.

c. Contribution of the Programmer is not Overlooked

Where the person running the computer program is not the actual writer of that program, there may also be concerns about attributing some rights or recognition to the writer himself or herself. However, contributions of the user of the program and the programmer should not be conflated. The programmer may be the author of the computer program itself, which Singapore’s Copyright Act recognises as a form of literary work. Meanwhile, the person operating the program may be the author of the final output.

Where the writer of the program also had some influence in determining the final output, then it is also possible for the writer to be a co-author, subject to any contract providing otherwise. In this way, both parties’ contributions can be recognized.

If the data set is fixed too rigidly, the bot can only give logical and limited responses. Set too widely, and the output may become incoherent and nonsensical. This may not be such an issue in the generation of more technical works, such as instruction manuals or even writing of code. However, artificial intelligence scores poorly in creating artwork or literature that expresses familiar themes both coherently and creatively.

If we cannot overcome this fundamental limitation, then a crucial element of human input will still likely be essential in the creation of a computer-generated work. This may take the form of initial instruction to guide the searching and processing of a computer program, or some final, critical decisions about how to proceed from the output generated. This crucial element of direction and judgment remains the key in justifying authorship.

This may change with ongoing research into computational creativity, which is a sub-field of artificial intelligence that seeks to integrate studies in psychology and philosophy. Artificial intelligence is also being trained in natural language generation, albeit with varying levels of fluency. This will go toward developing the complexity and nuance of a computer-generated literary work.

Where these developments will lead us is open to speculation, but an endpoint both desired and dreaded by many is the generation of a bot that tells us about the world not just in factual answers (e.g. Siri or Alexa), but with creative expressions from its own cognitive functions.

As we move toward that stage, there will be opportunities to consider excluding these works from the category of “author’s works”. Under Singapore’s copyright regime, literary, dramatic, musical and artistic works are treated as “authors’ works”, but copyright is also extended to a category of “subject matter other than works”. The latter are often referred to as “neighbouring” or “entrepreneurial” works.

For these works, there is no need to identify a human author or prove originality to claim copyright ownership. Examples include sound recordings, television and sound broadcasts, and published editions of authors’ works. The rationale for extending copyright protection over these works is to reward investments and safeguard commercial interests. However, the owner of entrepreneurial works is only entitled to a shorter length and narrower scope of copyright protection.

In the future, it may be appropriate to relegate works generated by these sophisticated, fully automated systems from “author’s works” to “entrepreneurial works”. This would reward the individuals and companies who make investments in advancing technology, while awarding shorter lengths of copyright protection for works generated using said technology.

We return again to the Court of Appeal’s comment in Asia Pacific Publishing that “not infrequently, in cases involving a high degree of automation, there will be no original work produced for the simple reason that there are no identifiable human authors”.

At this stage, the growth of computer-generated work may not be as disruptive to the copyright regime as forecasted. For practical purposes, proper documentation of the control, judgment and input in the creation of a computer-generated work should be sufficient to ensure that a human author is identified and original aspects of the work continue to be protected under copyright law.

This article was first published by Asia Law Network.