As M&A markets recovered in the years following the global financial crisis, big banks, dealing with the post-crisis wave of new regulatory requirements, were notably absent from the wave of consolidation. That tide now appears to be turning.

In May, Fifth Third Bancorp's US$4.6 billion acquisition of MB Financial, the largest banking deal globally at that point, stands as a sign of more to come. And that deal was eclipsed at the beginning of October as Saudi British Bank announced its purchase of Alawwal Bank for US$4.8 billion, creating the kingdom’s third-largest lender. But why now? The answers lie in changes to regulatory and monetary policy, and the rise of technology. 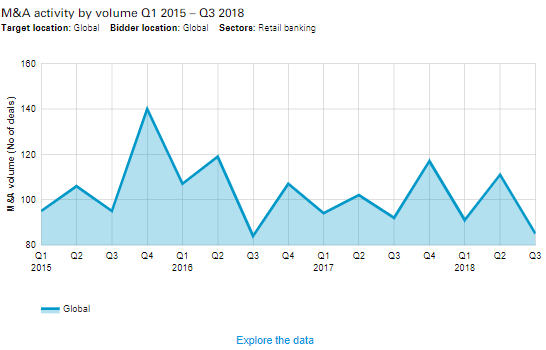 In May, President Trump signed a bill that dialled back some of the requirements of the Dodd-Frank Act 2010, which imposed higher capital reserves so that banks could better absorb loan losses and withstand future downturns. Crucially, the measure, which won bipartisan support in Congress, lifted the threshold over which banks are subject to enhanced regulation, and deemed “too big to fail,” from US$50 billion in assets to US$250 billion.

In principle, this change should spur M&A activity in the small- to medium-sized space, as lower-tier banks can now scale up without being handicapped by costly regulatory requirements, such as being obliged to undergo stress tests, prepare resolution plans, and meet leverage and liquidity requirements.

It is not only regulatory rollback that is clearing the path for dealmaking. US interest rates have been edging up for some time, and it is expected the Federal Reserve will need to target 3% in order to keep inflation in check as the economy grows, stimulated by the Trump administration's recent corporate tax cuts. Higher interest rates and lower taxes equal greater banking profits. According to the Federal Deposit Insurance Corporation, net income in the sector reached a record US$56 billion in the first quarter. This means there is a growing pool of surplus cash available for deals.

Rise of the challengers

Regulation is playing its part in other countries, too. The UK banking sector is dominated by five institutions—Barclays, Lloyds, HSBC, Royal Bank of Scotland and Banco Santander—and the heavily consolidated nature of the market has meant that large-cap M&A has been lacking for some time. The country's ring-fencing rules require that these incumbents split their retail and investment banking operations, a process that is ongoing.

Amid this nationwide restructuring, M&A has been low on banks' strategic agendas, and it is doubtful that the Competition and Markets Authority would permit a merger between any of these banks. However, a number of challenger banks have entered the fray in recent years and are reaching significant scale. In June, Clydesdale and Yorkshire Bank Group acquired Virgin Money for US$2.2 billion, the third-largest banking deal globally so far this year, creating the sixth-biggest lender in the UK, leapfrogging TSB.

A further regulatory driver came earlier this year with the expiration of the Bank of England's (BoE) Term Funding Scheme, which provided £140 billion worth of cheap loans to banks. The purpose of this monetary easing was to support affordable lending in the real economy, although there is some evidence that it was used to improve profits. With the BoE now closing the tap on this ultra-low-cost financing, challengers may look to consolidate in order to lower their overheads and maintain profit margins.

Across Europe, the Payment Services Directive 2 (PSD2), which entered into law at the beginning of 2018, is another potential M&A driver. PSD2 aims to level the playing field and increase competition by opening the big banks’ ownership of customer account information to third parties, who can use this data to offer their own services. To date, mainstream banks have been able to defend and grow their market share by offering conventional products, with little need for differentiation.

As well as improving the sophistication, customization and range of services available to consumers, the new “open banking” environment is piling pressure on incumbents to innovate in order to keep up. Some of this will come from internal R&D, but some banks prefer to partner with, or acquire, fintech firms in order to gain swift access to technology and talent.

Post PSD2, a number of major players have sought to steal a march on their competitors. In May this year, Danske Bank, the largest lender in Denmark, made its first-ever fintech investment by acquiring Spiir, an app that helps users to manage their budgets. The following month Italian bank Intesa Sanpaolo backed a venture financing round for Oval Money, an automated savings app.

The impetus for banks to innovate and sharpen their competitive edge is not isolated to Europe. Open banking regulation notwithstanding, financial institutions are under rising pressure to re-platform and modernize their services to meet the needs of digitally literate customers.

Already this year, Goldman Sachs’ consumer banking division has snapped up personal finance startups Final and Clarity Money; however, this is somewhat of an outlier in the US market.

According to a report from research firm CB Insights, 40 of the top 50 banks by total assets operating in the US, including Bank of America, Morgan Stanley and Wells Fargo, had not acquired a fintech startup in the five years prior to the report’s February 2018 release, with the remaining ten players responsible for a total of only 18 such deals over that period. Notably, five of these acquisitions were made in 2017 alone, a signal that US banks are beginning to focus on the innovation potential.

After years spent on the sidelines repairing balance sheets and restoring capital reserves, banks are now primed for an M&A comeback. Regulatory and policy shifts are prompting lenders to re-evaluate their strategies, and technology is enabling market entrants to challenge established brands for the first time. These conditions have the potential to trigger a delayed wave of consolidation as banks make acquisitions necessary to secure their futures.