The General Court has recently overturned two EUIPO Board of Appeal decisions which deemed Gullón’s marks as used to be different to their registered 3D trade marks shown below due to differences in the dominant elements. It held that the minor changes to the brand as used were insufficient to alter the distinctive character of the registered marks, and that genuine use had therefore been proven. 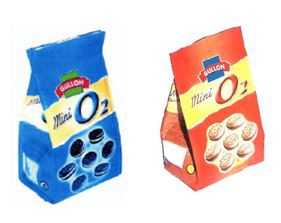 The Court also confirmed that the scale of use had been sufficient. The invoices provided were considered to be of an exemplary nature, showing regular use over three and a half years. As the invoices were addressed to various distributors, the extent of use was deemed to be widespread, thus amounting to a real and serious commercial effort and not a mere attempt to simulate genuine use.

In 2014, O2 Holdings Ltd filed an application for revocation of the marks claiming that they had not been put to genuine use in connection with the relevant goods in class 30 during the relevant time period. The applications for revocation were rejected by the Cancellation Division but later upheld by the Boards of Appeal, which took the position that the marks as used altered the distinctive character of the marks as registered and that the criterion relating to the extent of use had not been satisfied.

Not satisfied with the decisions of the Boards of Appeal, Gullón appealed to the General Court. O2 then saw its case crumble as the Court upheld the Spanish company’s appeal. Firstly, unlike the Board of Appeal, it found that the differences between the marks as registered and the marks as used (in particular, the white colour in the upper part of the packaging and the stylization of the element ‘gullón’, the letter ‘O’ and the number ‘2’ in the ‘mini O2’ element – comparison displayed below) didn’t affect the distinctive character of the registered marks. See graphic below comparing the complete packs as registered and main elements as used:

In this respect, the Court found that the combination of colours was not a distinctive or dominant element of the registered marks and highlighted that “according to settled case-law, whilst colours are capable of conveying certain associations of ideas and of arousing feelings, they possess little inherent capacity for communicating specific information, especially since they are commonly and widely used, because of their apparel, in order to advertise and market goods and services, without any specific message” (p. 33).

Secondly, on the proof of use, the Court found that, while the commercial volume of the use of the contested marks was somewhat limited, the invoices submitted demonstrated that the goods at issue were marketed regularly for a sufficient amount of time during the relevant time period. These invoices together with the numerous press articles and advertisements relating to the marketing of the goods in question during the relevant time period were sufficient to prove that the contested marks had been put to genuine use.

The key takeaway from this case for rights holders is that substantial variations to colours and figurative elements will not necessarily negate a finding of genuine use, even in relation to food products. This is completely at odds with market reality, where those in the FMCG industry know that colour is a key driver, if not the strongest driver, of consumer recognition. In this case, the mere presence of the GULLON and O2 word elements in the marks as used seems to have sufficed to establish genuine use, effectively reducing the marks to their word elements.

In addition, the case confirms that a low volume of goods marketed under the relevant trade mark does not necessarily mean that genuine use cannot be claimed or demonstrated. A lower volume of trading may be compensated for by a high intensity of use or a period of very regular use of that trade mark and vice versa.