High yield issuance surges in the US, Europe and APAC

High yield bond markets posted strong gains in the US, Europe and the Asia Pacific region (excluding Japan) (APAC) in the first half of 2021, with issuers taking advantage of sustained high levels of liquidity to secure funding, driven largely by refinancing. 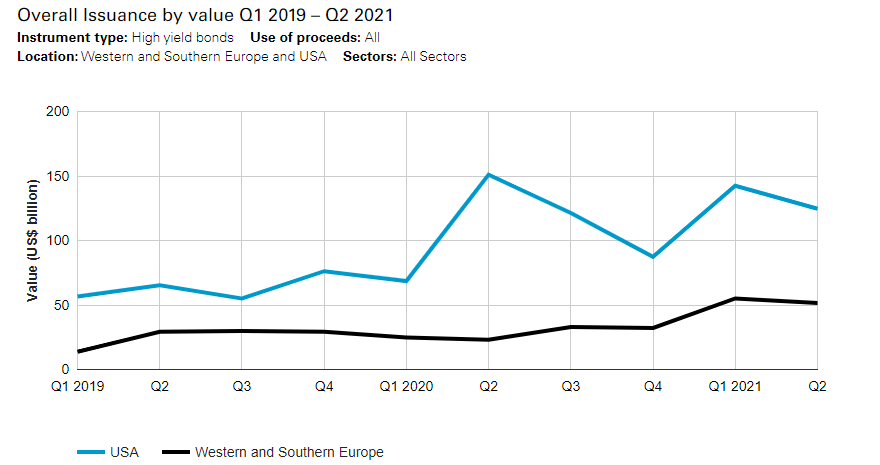 Issuance in the high yield bond market in the US was up 22% year-on-year, climbing from US$219.6 billion to US$267.1 billion. A surge in refinancing, which was responsible for 70% of overall activity in H1 2021 and reached US$186.8 billion, underpinned the growth in activity as borrowers took advantage of a liquid market to secure capital at attractive rates and push out maturity walls.

In Western and Southern Europe, abundant liquidity ensured robust new money and refinancing high yield bond issuance, which more than doubled year-on year in the first half of 2021, climbing from US$47.9 billion in H1 2020 to US$106.6 billion in H1 2021.

In APAC, high yield bond issuance for US dollar-denominated bonds for the period was up by almost a third year-on-year, climbing from US$45.1 billion to US$57.9 billion.

The climb in issuance in APAC so far comes despite a slowdown in activity by the Chinese real estate issuers that historically accounted for the bulk of APAC high yield deals.

Chinese real estate issuance was down 11.24% year-on-year, falling from US$32.2 billion in H1 2020 to US$28.6 billion in H1 2021. A sharp dip of 38% from Q1 to Q2 2021 dragged the sector’s half-year issuance figures lower, as the Chinese government pushed for property companies to cut leverage and investor sentiment cooled due to a few high-profile defaults in the onshore bond market.

Strong performance by high yield bond markets outside of China, as well as high levels of activity from issuers in other sectors, made up for the Chinese real estate slowdown.

High yield bond issuance from non-Chinese issuers climbed 194.9% year-on-year to reach US$25.5 billion for H1 2021, and some of the largest deals were secured by non-Chinese issuers. Singaporean real estate logistics provider GLP raised US$850 million priced at 4.5% and Indian hydropower producer JSW Hydro Energy secured a US$707 million deal priced at 4.12%.

Activity levels in other industries outside of real estate were also buoyant, with issuance in the basic materials, energy and government sectors increasing year-on-year by 388.75%, 215.74% and 116.38%, respectively.

APAC also recorded an increase in the still nascent but fast-growing green and ESG-linked high yield bond space, where issuance showed a double-digit increase of 11.5% from US$6.8 billion in Q1 2021 to US$7.58 billion in Q2 2021.

In Western and Southern Europe, new money high yield bond deals were up year-on-year, from US$16.8 billion in H1 2020 to US$34.3 billion in H1 2021. Buyouts and M&A activity accounted for more than half of those new money deals, with issuance totaling US$19.22 billion. Refinancing high yield bond activity over the same period more than doubled year-on-year from US$30.5 billion to US$68.4 billion.

Borrowers in the region found high yield bonds increasingly attractive, with the weighted average yield to maturity on fixed rate bonds coming in at 3.87% for the first six months of the year, versus rates that climbed to as high as 4.73% in the final quarter of 2020.

One driver of low pricing, in addition to the abundant liquidity in the market, has been the volume of higher rated high yield bond credits coming to market. According to Debtwire Par, issuance in Western and Southern Europe was split evenly between deals rated double B (39%) and deals with single B ratings (41%).

This contrasts with the loan market, where only 16% of deals secured double B ratings and 83% of loans were single B credits. The significant contribution of double B credits to high yield issuance has seen pricing move lower, with weighted average yield to maturity on unsecured bonds in Q2 2021 sitting at 3.1%, the tightest pricing levels recorded.

Issuers have been able to take advantage of the market conditions to raise large sums of capital at attractive rates.

For example, Ontex, the manufacturer of personal hygiene solutions, raised a €580 million senior unsecured high yield bond maturing in 2026 priced at 3.5%. In this instance, pricing tightened in favor of borrowers from initial pricing indications, highlighting the high investor demand for new deals.

Current investor demand for deals shows no sign of slowing, pointing to ongoing high levels of issuance at favorable pricing levels for borrowers.