The USPTO released a study in June 2022 that analyzed the prevalence of Fintiv denials occurring between January 1, 2019 and December 31, 2021. The Study focused on data illustrating how often patent owners raised parallel litigation as an issue; how often the PTAB denied institution because of parallel litigation; how often petitioners filed stipulations; and how stipulations affected denial rate. More than 80% of petitioners at the time of filing a petition have already been accused of infringement in another venue (Study at 3), and so the issues related to discretionary denials and Sotera stipulations often come up before the PTAB.

The PTAB first exercised the Director’s discretion to deny institution based on parallel litigation in NHK Spring Co. v. Intri-Plex Techs., Inc., which the PTAB designated precedential on May 7, 2019. Study at 5. After the PTAB designated NHK precedential, patent owners increasingly cited parallel litigation in arguing that institution should be denied. Study at 12. As seen in Figure 1 below, cases in which parallel litigation was raised by the patent owner in opposing institution rose from 10% of all PTAB cases in January-March 2019 to 23.9% of cases in October-December 2019. Id. Such cases then dropped to 14.8% of cases in January-March 2020 before rising to 24.7% in April-June 2020. Id. 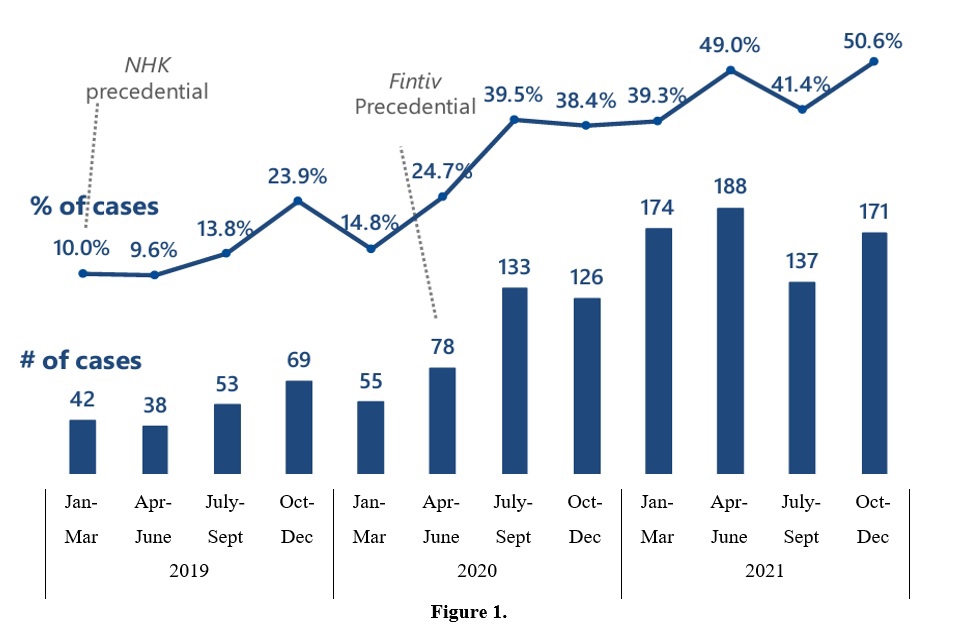 In March 2020, the PTAB designated its decision in Apple Inc. v. Fintiv Inc. as precedential, which established a multi-factor test for deciding whether to deny institution when there is a likelihood of duplicative litigation. Study at 6. Once Fintiv was designated as precedential, the number of cases that raised parallel litigation as a ground to deny institution doubled from 24.7% to 50.6%. The number of discretionary denials due to parallel litigation also increased to about 38% of decisions that analyzed NHK/Fintiv in October 2020-March 2021. Study at 12, 16.

In Sotera Wireless, Inc. v. Massimo Corporation, the PTAB instituted review despite parallel litigation “when a petitioner filed a broad stipulation to not assert in district court grounds ‘raised or that could have been reasonably raised in an IPR.’” Study at 7. After the PTAB designated Sotera as precedential in December 2020, stipulations became more prevalent and Fintiv denials fell. Study at 7, 16, 28.

Figure 2, below, shows the number of NHK/Fintiv denials (orange) versus the number of trials instituted where NHK/Fintiv was addressed in the PTAB’s analysis (blue). Study at 16. As seen in Figure 2, denials (orange) began to fall in April 2021, and ultimately fell to under 7% in October-December 2021. Study at 16. And in October-December 2021, out of the 91 decisions that analyzed NHK/Fintiv, 68 cases included a stipulation. Study at 16, 28. The PTAB denied only 2 of those 68 cases involving a stipulation. Study at 28. 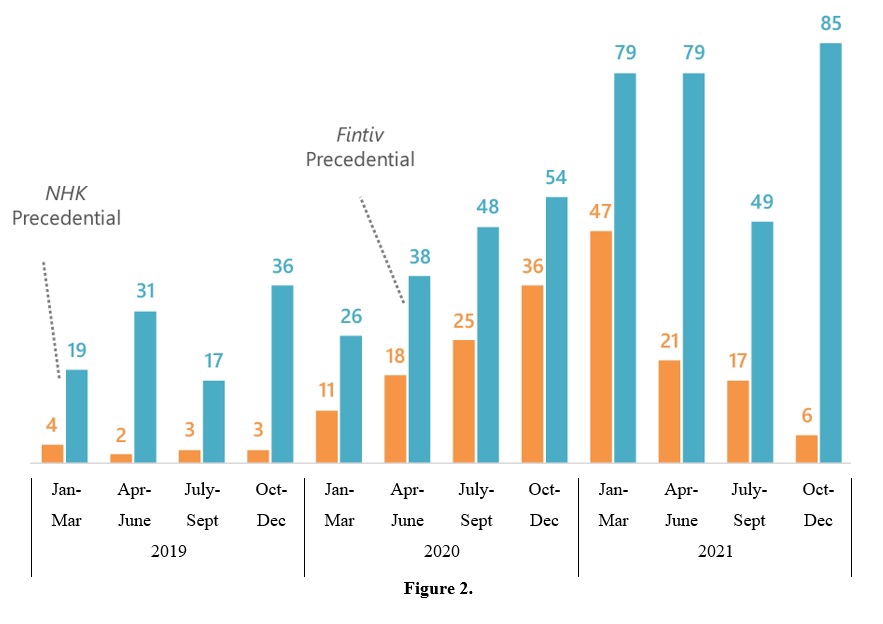 The trend of rising stipulations and low number of Fintiv denials will most likely continue in light of Director Katherine Vidal’s recent memorandum to the PTAB. Director Vidal’s memorandum clarifies, “the PTAB will not discretionarily deny institution…where a petitioner stipulates not to pursue in a parallel district court proceeding the same grounds as in the petition or any grounds that have been reasonably been raised in the petition.” In other words, the PTAB will not exercise discretion to deny institution if the petitioner files a Sotera stipulation.

The Vidal Memorandum also clarifies the PTAB will not discretionarily deny institution if the co-pending litigation in question is an ITC case. Director Vidal reasoned that “denying institution because of parallel ITC investigation will not necessarily minimize potential conflicts” with the PTAB because “the ITC lacks authority to invalidate a patent and its invalidity rulings are not binding on either the [USPTO] or a district court.” Both of these directives from Director Vidal’s Memorandum will likely cause the rate of discretionary denials based on parallel litigation to remain low for the foreseeable future.