The European leveraged loan market is going from strength to strength, with a continuing surplus of available credit compared to deal requirements, resulting in very borrower-favourable terms. However, we are seeing signs of a two-tier market emerging, with strong demand and pricing reductions for deals perceived as stronger credits, alongside an increase in flex for some other credits. We are also seeing an increase in volatility. In our view, PE deal teams need to be aware of the recent market developments, which are impacting financing terms.

Developments in the Financing Market

The growth of the European institutional market is influencing credit availability for deals. 2017 European CLO issuances are at a new record, and alternative lenders continue to raise significant amounts. On the demand side, while refinancing volume has picked up, this does not offset the relative slowdown in the number of European leveraged acquisitions. Because the imbalance is most pronounced in Europe, Europeanleveraged loan pricing is cheaper than in the US, reaching a differential of 120 bps in October — the widest at any time in 2017 according to S&P Leveraged Commentary & Data (S&P). 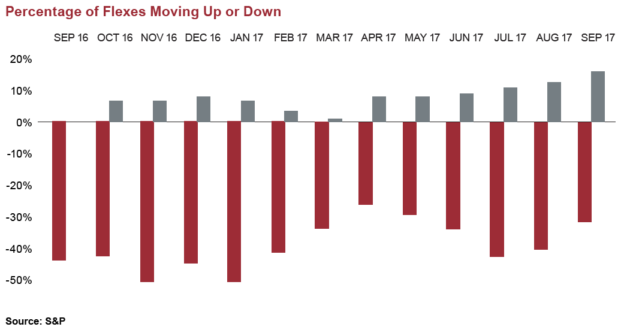 Reflecting this, the European covenant lite market continues to increase in popularity. In the last three months to 31 October, the market represented a record 81% (up from 53.6% in December 2016) of European leveraged loans according to S&P, also reflecting the relative growth in Europe of the institutional investor base that invests in this product.

However, we have also seen an increase in the frequency of financing flex being invoked. Flex allows an arranger to change pricing and/or certain document terms if there is insufficient demand in syndication.

Why is this happening in such a buoyant market, that also features oversubscription and reverse flex (pricing reductions) on other deals? Increasing deal volume in the second half of 2017 is giving financers more choice. Financers are focusing on perceived “attractive” credits, resulting in oversubscription and downward flex — such as cheaper rates. Financiers also feel more able to decline less attractive aggressive deals, unless terms are improved. In September, S&P tracked six (lender-friendly) upward flexes, and eight (borrower-friendly) downward flexes — the highest monthly percentage of upward flex and lowest percentage of downward flex since the beginning of 2016.

In our view, the assumption that this is an entirely borrower friendly environment is an over-simplification and PE firms should carefully assess buyout opportunities and seek to gauge market appetite for financing when considering terms. Once flex starts for a deal, more terms can be affected than would have been the case had the deal been pitched at the right level to start — so this is a market in which finesse can pay off.