This is part of a series of articles discussing recent orders of interest issued in patent cases by the United States District Court for the District of Massachusetts.

Recognizing the decline in courtroom opportunities for newer lawyers, in Enanta Pharmaceuticals, Inc. v. Pfizer Inc., No. 1:22-cv-10967, Judge Casper reiterated the policy to strongly encourage the participation of relatively inexperienced attorneys in all court proceedings including but not limited to initial scheduling conferences, status conferences, hearings on discovery motions and dispositive motions, and examination of witnesses at trial.

The Court also encouraged counsel to seek additional guidance from the Court in particular cases concerning the scope and application of this policy.

In Michelin North America, Inc. v. Maxam Tire North America, Inc., No. 1-22-cv-10047, the plaintiff stated three causes of action: 1) infringement of its design patent on large tires used in the mining industry; 2) unfair competition in violation of Lanham Act; and 3) unfair competition in violation of Mass. Gen. Laws c. 93A. Maxam moved to dismiss all claims. On August 25, 2022, Judge Saris allowed in part the defendant’s motion on the patent infringement claim and denied the motion on the trade dress claim and Chapter 93A claims.

Maxam argued that Michelin failed to state a claim for design patent infringement because: 1) the United States Patent and Trademark Office (“USPTO”) had already made a finding of non-infringement by granting the defendant its own design patent; 2) the tread designs of its tire were plainly dissimilar from the patent; and 3) the plaintiff failed to plausibly allege that the accused products satisfied the ordinary observer test, i.e., how or why an ordinary observer would be deceived into thinking that the accused products were the same as the patented design.

First, the Court declined to rely upon the defendant’s own patent because Federal Circuit case law instructed that later-issued patents were not presumptive evidence of non-infringement.

Next, the Court ordered the parties to produce high-quality photographs of the tires and conducted an ordinary observer analysis.

Comparing the patented design and the accused products side-by-side, the Court found that while the divots on the tires were different in isolation, viewed as a whole, this difference would not stand out to an ordinary observer. Thus, the defendant’s Version 2 (Size 59) tires were deceptively similar to the plaintiff’s patent design. 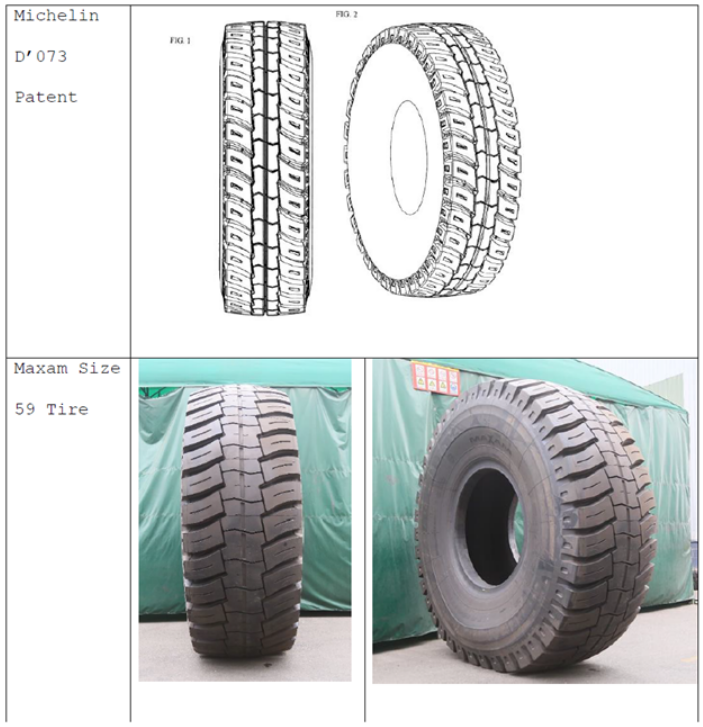 In Contrast, the Court found that the defendant’s Version 1 (MS403) tires were not similar enough to deceive because the lack of any center lines in the Version 1 tires stood out as a difference and affected the overall look. 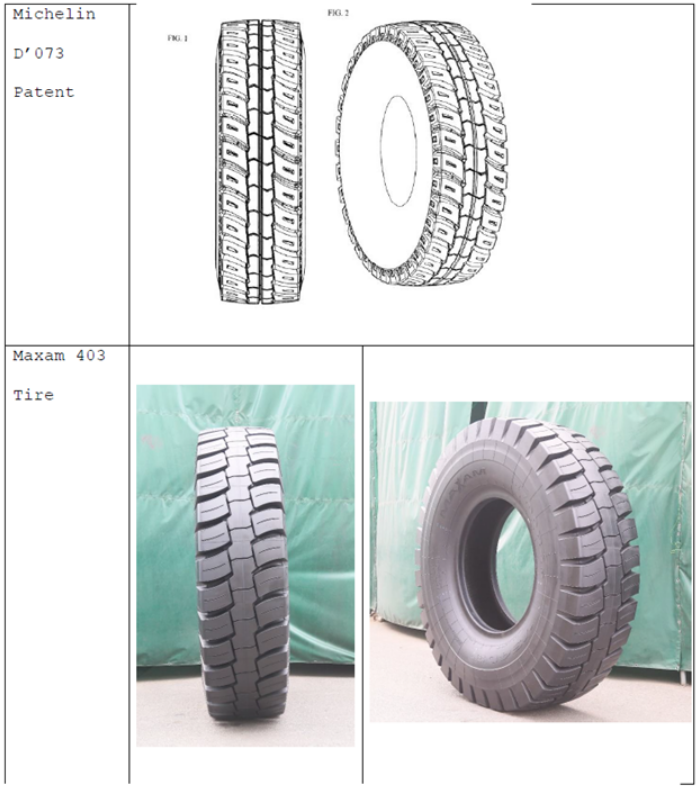 The Lanham Act protects trade dress, which is defined as the design and appearance of a product together with the elements making up the overall image that serves to identify the product presented to the consumer. In order for trade dress to be protected, a plaintiff must prove that the dress is: (i) used in commerce; (ii) non-functional; and (iii) distinctive.

The Court denied the motion to dismiss as to trade dress claim after analyzing these factors.

The Court found the “used in commerce” factor was not the focus of the parties’ dispute, and it had been plausibly alleged.

The Court found that the plaintiff had pled that other tread patterns used by the plaintiff, the defendant, and third-party competitors showed the design was non-functional.

The plaintiff alleged several pieces of circumstantial evidence, including 1) the original XDR Trade Dress had been used since 2001, and the XDR2 Trade Dress has been used since 2011; 2) it had advertised tires featuring the XDR Trade Dress at trade shows, as well as digital and print media circulated nationwide; 3) it had invested heavily in marketing the design of the relevant XDR tires, expending significant resources to promote the aggressive look and feel of the treads of the tires; 4) it prominently displayed the trade dress in advertising materials because it served as a strong source indicator, and as a result of these efforts, the XDR Trade Dress had become well-known to mining tire customers and end-users, and the mining tire trade generally, as identifying Michelin as the source of such tires in the United States; 5) the defendant introduced a new similar version only after the plaintiff introduced its XDR2 tire embodying the XDR2 Trade Dress, which suggested intentional copying.

In view of this evidence, the Court ruled the plaintiff had alleged secondary meaning adequately to survive a motion to dismissing.

The Federal Circuit recently held that, in the context of trade-dress infringement, accused products that are not substantially similar cannot infringe and considered eight factors in assessing likelihood of confusion, including 1) the similarity of the marks; 2) the similarity of the goods (or, in a service mark case, the services); 3) the relationship between the parties’ channels of trade; 4) the juxtaposition of their advertising; 5) the classes of prospective purchasers; 6) the evidence of actual confusion; 7) the defendant’s intent in adopting its allegedly infringing mark; and 8) the strength of the plaintiff’s mark.

First, the Court found that both versions of the trade dress were substantially similar to their allegedly-infringing Maxam counterparts.

Second, even though there was no evidence of actual confusion, the Court found the plaintiff had plausibly alleged the rest of the likelihood of confusion test factors: 1) the marks were similar because the defendant’s tire design also included all of the features of the XDR2 Trade Dress; 2) the goods were similar because the defendant was a competitor of the plaintiff in the field of tires for mining; 3) the defendant marketed its mining tires to the same customer and end-user base as the plaintiff; 4) the relationship between their advertising was shown by the digital renderings of both included in the Complaint; 5) the classes of prospective purchasers included the same end user groups and a defendant salesperson entered a plaintiff customer’s business by presenting plaintiff credentials; 6) the defendant’s intent in adopting its allegedly infringing design was reflect in the fact that the defendant changed tread patterns after the plaintiff introduced its new tread pattern; and 7) the strength of the plaintiff’s mark was attributable to its trade dress.

Accordingly, the Court denied the motion to dismiss the trade dress claim.

Summary Judgment of No Inequitable Conduct

Inequitable conduct requires a showing of an intent to deceive and, inter alia, an affirmative failure to disclose material information but for which failure the patent would not have issued. Nuance alleged that SynKloud’s named inventor, Poirier, failed to disclose to the Patent Office two references, “DD 2.0 Manual” and “FAQ_10,” related to a prior art Nuance product called DragonDictate.

The facts were undisputed: the DD 2.0 Manual taught saving voice files, but not transferring them between computers and FAQ_10, available on the Dragon website, taught transferring of voice files between computers. Poirier was CTA of a Nuance reseller that had not sold any DragonDictate products. Poirier admitted to having searched the Dragon website for information related to other products, but denied having seen DD 2.0 Manual or FAQ_10 during production of the asserted patent.

Nuance argued that, although it could not find the relevant distributor agreement, Poirier was obligated to sell DragonDictate and that because of his admission to performing Google searches related to the patented technology “he would have found websites discussing moving DragonDictate between computers.”

Considering the evidence, the Court found that Nuance had not presented clear and convincing evidence to substantiate inequitable conduct because the circumstantial evidence did not sufficiently support Nuance’s suggested inference that Poirier possessed, and thus withheld, DD 2.0 Manual or FAQ_10 during production.

Finding no showing of intent, the Court declined to address materiality.

SynKloud moved for sanctions under Rule 11 for Nuance’s failure to withdraw its inequitable conduct claim; Nuance responded with its own motion arguing that “SynKloud’s Rule 11 motion, not Nuance’s counterclaim, [] violates Rule 11.”

Lamenting “[t]he usual volley of allegations of misconduct so endemic to patent litigation,” the Court denied SynKloud’s motion finding that, despite a lack of factual support leading to resolution in its favor on summary judgment, Nuance had identified sufficient circumstantial evidence to render its claim “not so baseless as to merit sanctions.” The Court also found that “Nuance’s tit-for-tat motion for sanctions is also without merit.”

In the same case, SynKloud Technologies, LLLC v. Nuance Communications, Inc., No. 20-cv-10564, the Court issued a separate order addressing the defendant’s motion for summary judgment of non-infringement and invalidity regarding the asserted patent. The Court allowed summary judgment in part and denied it in part.

The Court had previously construed several claim terms, including articulating separate and distinct meanings for two terms (“enrollment entries” and “voice model”) occurring in the asserted claims of SynKloud’s patent. In its claim construction order, the Court cautioned SynKloud against conflating the two terms.

Each limitation of a patent claim must be met to prove infringement; if a claim limitation is not met, the claim is not infringed. Nuance argued that, based upon the Court’s claim construction order, three asserted claims (29, 34, and 51) of SynKloud’s patent were not infringed because SynKloud’s infringement allegations against the “user profile” feature of Nuance’s Dragon products required conflating the two separately defined claim terms, which the Court had cautioned against.

The Court agreed with Nuance regarding two of the three asserted claims (29 and 34), even calling one of SynKloud’s claim limitations “hopelessly confusing, muddled, and poorly written.” Because the feature in the accused product combined functions separately performed in the first two asserted claims, the Court found that the accused products could not infringe either claim, and entered summary judgment of non-infringement as to those claims.

The third asserted claim (51), however, used a different term (“data”) rather than “enrollment entries.” The Court found that although this term appeared to refer to the same information described by “enrollment entries,” the use of a different term left open a genuine dispute of material fact, thereby precluding summary judgment on this third asserted claim.

Nuance also moved for summary judgment of invalidity against the same three claims, arguing that the “enrollment entries” term in SynKloud’s patent was invalid as indefinite. The Supreme Court has stated that “[a] patent is invalid for indefiniteness if its claims, read in light of the specification delineating the patent, and the prosecution history, fail to inform, with reasonable certainty, those skilled in the art about the scope of the invention.”