The bill also provides for a 19¢ per gallon increase on the tax on other motor fuels (i.e., diesel), from 28¢ per gallon to 47¢ per gallon. These increases became effective July 1, 2019. However, it is important for taxpayers to recognize that this general increase does not impact all fuel consumers equally. For some, the changes presented in H.B. 62 will actually reduce their per-gallon fuel tax expense.

Fuel tax refunds for local government entities (and their contractors)

Public transportation systems providing transit and paratransit services will be eligible for a refund of motor fuel tax paid, less one cent per gallon. Importantly, H.B. 62 also opens the opportunity for private contractors of transit and paratransit services to receive a refund of fuel taxes paid at the same rate. Public transit or paratransit services may include fixed-route or demand-responsive bus services, but does not include shared-ride taxi services, carpools, school bus transportation, or charter/sightseeing services. Private contractors of those services would be any private company that works on behalf of a government entity to provide those same services. This update would entitle such service providers to a refund of 37.5¢ per gallon on gasoline and 46¢ per gallon on diesel.

Local government entities (and their contractors) remain eligible to file for refunds of fuel taxes paid within one year from the date of purchase.

Taxpayers should be aware that motor fuel tax refunds under Ohio Revised Code (“O.R.C.”) Section 5735.14 have broad application and may apply to fuel used in machinery, construction equipment, power takeoff units, and by vehicles while operating off of the public highways of the state (“off-road”). The general rationale behind this exemption is that fuel taxes are collected in order to build and maintain public roads. If a taxpayer can prove that it used its fuel somewhere other than the public roads within the state, it should be entitled to a refund of that fuel tax. Such off-road usage can be tracked in numerous ways, including GPS, telematics, hubometers, and odometers.

Under Ohio law, sales of motor fuel are generally exempt from state and county sales tax. However, sales tax will attach to sales of motor fuel when private-sector taxpayers receive refunds of motor fuel tax due to qualified off-road use under O.R.C. Section 5735.14(A). The purpose of this sales tax is to apply at least one level of consumption tax on these purchases of fuel, regardless of how the fuel is used. Taxpayers will compute the amount of sales tax owed by multiplying the effective sales tax rate in their county by their average fuel cost during the claim period. The amount of sales taxed owed will be netted against the full amount of a fuel tax refund.

Even when sales tax might apply on the fuel used off-road, the value of a motor fuel tax refund will almost always be greater than any sales tax payable because of the relative values of motor fuel combined with the different taxes. This becomes somewhat of an apples-to-oranges analysis because sales tax is imposed as a percentage of the sale price whereas fuel tax is purely based on the volume of fuel purchased. Take the example of a construction company in Hamilton County that buys a gallon of diesel that costs $3.00. If used in an off-road capacity (e.g., in its on-site construction equipment), the purchaser would be entitled to a fuel tax refund on the diesel equal to 47¢. Since Hamilton County’s sales tax rate is 7%, the amount of sales tax due would be 21¢. Thus, the taxpayer would be entitled to a 26¢ per gallon fuel tax refund (46¢ minus 21¢). While the numbers are small in isolation, they add up significantly in aggregate for large-scale purchasers of fuel.

Below is a helpful chart that was published by the Ohio Department of Taxation in Information Release XT 2019-01, ST 2019-01 showing the different refund rates and limitations per category of usage. 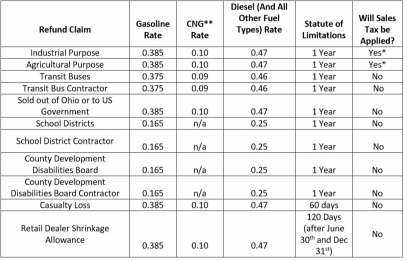 *The changes in H.B. 62 allow for an exemption from motor fuel tax and sales tax when the motor fuel is used to power a vehicle’s refrigeration unit (other than air conditioning units used to provide comfort to passengers). These refrigeration or “reefer” units are commonly used in the food and beverage distribution and delivery industry to provide temperature control within trailers. Fuel tax paid on fuel used in these units is entirely refundable, up to 47¢ per gallon for diesel-operated units.

**As explained further below, the CNG tax rate and corresponding refund rate will adjust in future periods.

H.B. 62 introduces an Ohio state-level tax on compressed natural gas (“CNG”) for the first time. The tax on CNG will phase-in over the course of five years:

Don’t forget about other state and federal opportunities

Taxpayers should keep in mind that similar fuel tax exemptions apply in other states for fuel used in an off-road capacity. In addition to the state-level benefits, taxpayer should also consider their federal fuel tax refund opportunities. Like Ohio, the IRS permits refunds for fuel tax paid for certain off-road usage. For example, Internal Revenue Code Section 4041 provides an exemption from federal diesel fuel tax for “off-highway business use,” which includes fuel used in operating certain types of equipment such as forklifts, bulldozers, generators, and refrigeration units. Thus, in certain cases, taxpayers may be eligible for both state and federal tax refunds on the same gallon of fuel.

There is no question that Ohio’s fuel tax increase will create an increased financial burden for most consumers. However, these recent changes will not impact all taxpayers equally. Companies with significant fuel tax expenses should consider opportunities for exemption and refunds at state and federal levels.