The Arrangement applies to both monetary and nonmonetary judgments that are considered to be civil and commercial in nature under both Mainland and Hong Kong law. However, the Arrangement excludes, amongst others: 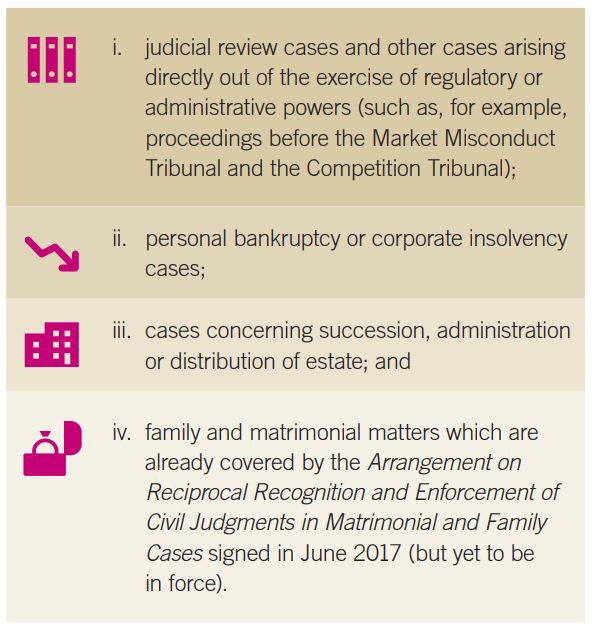 It also excludes from its application judgments on the validity of arbitration agreements, anti-suit injunctions and rulings on interim relief.

Certain grounds for a mandatory refusal of an application for recognition and enforcement are provided for in the Arrangement. These include: if the judgment does not meet the jurisdictional requirements (discussed above), if the judgment was obtained by fraud, and if the defendant was not summoned in accordance with the law of the requesting jurisdiction or was not given a reasonable opportunity to make representations or defend its case. However, in circumstances where the requested court is satisfied that the action in which the judgment was produced was contrary to a valid arbitration agreement or a valid jurisdiction agreement, it will have the discretion to determine whether or not to give recognition and enforcement to the judgment.

The new Arrangement is a welcomed step in the right direction, both in terms of providing greater clarity and certainty as to the scope of judgments that may enjoy reciprocal enforcement in Hong Kong and the Mainland and in terms of reducing the need for costly and timeconsuming parallel litigations over the same dispute between the same parties.

However, as noted above, the Arrangement does not apply to personal or corporate insolvency matters, where there is an increasing and urgent need for mutual recognition of and provision of assistance to liquidators appointed in Hong Kong in dealing with assets located in the Mainland.

It was indicated by the Department of Justice during the consultation exercise regarding the Arrangement that a separate stand-alone consultation on an arrangement with the Mainland on cross-boundary insolvency matters was in the pipeline. Whilst no details have yet been announced, this foreshadowed consultation on cross-border insolvency with the Mainland will be a significant and long-awaited development to facilitate fairer and more efficient administration of corporate insolvencies with cross-border elements.