Nearly thirty years ago, on October 14, 1994, Quentin Tarantino’s Pulp Fiction took the world by storm. The indie film with an $8 million budget turned into an international sensation, grossing over $200 million in box office sales and receiving nominations for and winning over 60 awards, including from the Academy and Golden Globe, and despite competition from other well-known titles such as Forrest Gump and The Shawshank Redemption. Pulp Fiction was first screened at the Cannes Film Festival where it won the prestigious Palme d’Or award for “Best Film.”

Pulp Fiction is a graphic, neo-noir, multistrand black comedy set in Los Angeles that collects four related crime stories and organizes them by theme, rather than chronological order. The film is known for its ironic juxtaposition of the incredibly violent with catchy banter and the overlay of pop culture references, a style that has since become a Tarantino staple. The film featured an all-star cast including John Travolta, Samuel L. Jackson, Bruce Willis, Tim Roth, Ving Rhames, and Uma Thurman.

Sometime in late 1993 or early 1994, then-art director at Miramax, Tod Tarhan, and his colleagues developed a concept for a promotional poster. The concept art depicted Thurman (in her role as Mia Wallace) as a femme fatale lying with her chest against a bed, looking up at the camera, and with her ankles crossed behind her. Thurman was further depicted holding a book in one hand, her hair in the other, and with a pistol in reach.

Once the sketches were approved by Miramax executive, Harvey Weinstein, Miramax approached Firooz Zahedi to execute its vision. Given Pulp Fiction’s limited budget, Miramax offered Zahedi $10,000 for the photoshoot. Zahedi accepted the offer, despite it being below his standard fee, and photographed Thurman in his studio where he selected several props including her shoes.

Miramax took Zahedi’s photo, made some edits (e.g., rotated the gun 90º; added the text “A QUENTIN TARANTINO FILM,” “PULP FICTION,” and “10¢”; and applied an aging effect to make the poster look like a classic paperback pulp fiction book cover), and created the iconic poster that was used to promote Pulp Fiction, first at the Cannes Film Festival and then in cinemas worldwide. 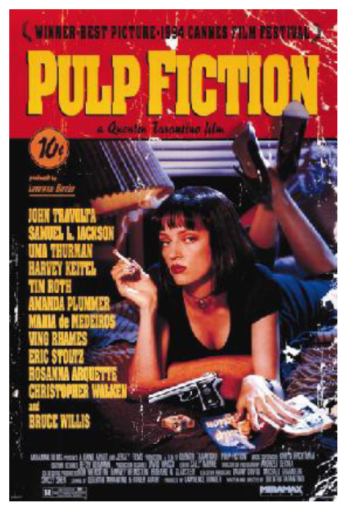 Over the years, Miramax has inconsistently credited Zahedi for his work. On the back cover of the 1994 film script published by Miramax Books, Miramax attributed the cover photograph to “© Firooz Zahedi.” That year when the poster won a “Key Art” award from Hollywood Reporter, Miramax again credited Zahedi as the photographer. But in 1995 when the poster first appeared on VHS tape sleeves, in 1996 when the poster was used on the sleeve of LaserDiscs, and in several years thereafter whenever the image appeared on T-shirts, socks, and other merchandise, Miramax included a copyright notice identifying Miramax as the copyright owner. Then, in 2003, Miramax applied for and obtained a copyright registration for the poster as a two-dimensional artwork. The registration does not mention Zahedi.

Zahedi was none too pleased. In 2015, Zahedi received a Mia Wallace action figure as a gift. The product’s packaging featured the poster and the action figure was stamped with a Miramax copyright. Zahedi’s stepson posted a picture of Zahedi holding the action figure to his Instagram account, pointing out that Zahedi “didn’t get toy royalties for his famous photo of UmaTM… But at least he has the toy now…” In 2019, Zahedi received a pair of socks that featured the photograph. This was the last straw for Zahedi, leading to his applying for and obtaining a copyright registration for his photograph. In May 2020, Zahedi filed a lawsuit against Miramax in the Central District of California asserting claims for direct, vicarious, and contributory copyright infringement. 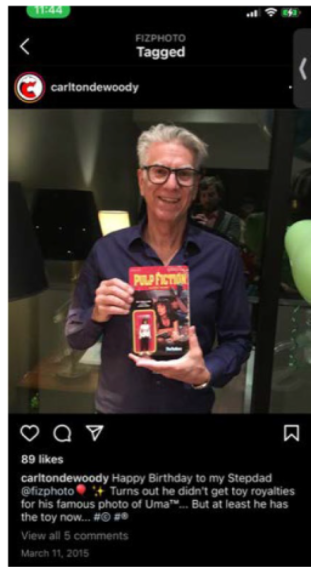 In September 2021, Miramax and Zahedi cross-filed motions for summary judgment. Miramax moved for summary judgment as to the entire complaint, claiming that Zahedi’s claims were barred by the statute of limitations or, in the alternative, estoppel and laches. Miramax further claimed that it, not Zahedi, owned the photograph as a work made for hire. Zahedi cross-moved as to the issues of his ownership of the photograph and Miramax’s statute of limitations defense.

As to the issue of ownership, the court granted Zahedi’s request to exclude Miramax’s evidence of its chain of title to the extent Miramax offered it to support its own motion for summary judgment. Zahedi argued that Miramax had not adduced sufficient evidence that it properly transferred rights in the photograph through the many years of corporate mergers and transfers between 1994 and now. The court found that Miramax’s failure to produce that evidence in support of its own counterclaim for infringement, on which Miramax carries the burden of proof as to its ownership, was not justified. But as to Zahedi’s infringement claims, the court found that Miramax’s failure to disclose the chain of title evidence was justified because Zahedi carried the burden to prove ownership and Zahedi did not specifically ask for those documents during discovery.

As to the “close relationship” prong, Zahedi argued that (1) he and Miramax had not entered into a contract or express agreement regarding the work in question and (2) he was not in contractual privity with Miramax, but rather its predecessor. The court rejected both arguments, finding that the parties had a prior business relationship since Zahedi took the photograph at Miramax’s request and granted at least a limited verbal licensing agreement regarding the photograph. Moreover, the “close relationship” limitation was intended to prevent copyright holders from needing to assert their rights against potential third party repudiations, but Zahedi knew that Miramax was the successor-in-interest and that Miramax was exploiting the photograph. 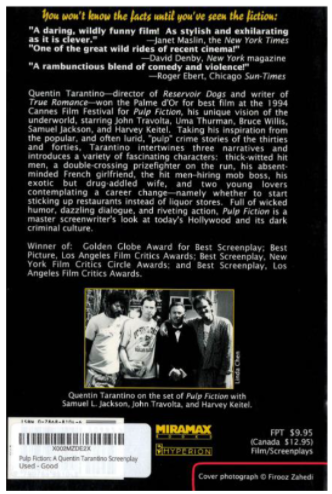 Zahedi’s Opposition to Miramax’s Motion for Summary Judgment, ECF No. 162-47.

Since the court found the parties were in a close relationship and Miramax had expressly repudiated Zahedi’s ownership claim in 2015, Zahedi had three years (until 2018) to file his lawsuit subject to the statute of limitations in 17 U.S.C. § 507(b). Since Zahedi did not file until 2020, his copyright infringement claim was thus statutorily barred.