On 31 August 2019, the Space (Launches and Returns) Act 2018 replaced the existing Space Activities Act 1998. The new regulatory framework for space access is designed to reduce barriers to participation in space activities by streamlining the approval process and significantly reducing the insurance required for launches and returns. This is expected to allow smaller businesses and universities to participate in space activities and facilitate innovation and entrepreneurship in Australia’s growing space sector.

What is the Existing Space Law Framework?

About the New Legislation

The new legislation has been developed to provide flexibility to not only adjust to the changes that have occurred within the space industry in recent years, but also to support innovation and participation by streamlining the approvals processes and reducing insurance requirements. In particular, this should allow smaller, emerging businesses and universities to be able to participate in space activities.

In summary the new legislation: 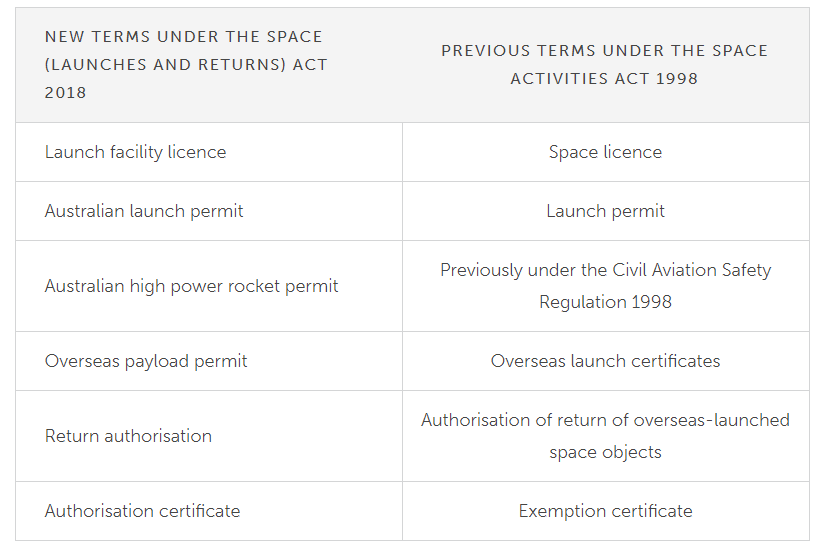 To obtain the Australian launch permit, the Minister needs to be satisfied that the person carrying out the launch or return is competent, the insurance requirements have been satisfied and the probability of causing substantial harm to the public or property is as low as reasonably practicable.[2]

New rules and permit requirements will regulate the launch of high power rockets from 30 June 2020. Existing arrangements will apply until then.

Part 3 Division 4 of the Space (Launches and Returns) Act 2018 outlines the process for the grant of a high power rocket permit, as well as a number of conditions an applicant must satisfy.

The old framework only allowed launch facility licences and Australian launch permits to be granted to corporations. This limitation has been removed so that small businesses and universities can be granted licences and permits. The new approval process considers the nature of the space activity being undertaken, rather than the type of organisation undertaking it.

These insurance requirements are now located in the Space (Launches and Returns) (Insurance) Rules 2019 to allow for greater flexibility for updates as the industry develops.