The following is a summary of the New Guidelines:

1. Judgment principles of the definition of an invention (eligibility) are made clear

The current Examination Guidelines for Computer Software-Related Inventions (“Current Guidelines”, i.e. the Guidelines before 1 July 2021) stipulate that “where there is further technical effect going beyond the normal physical interactions between the program and the computer in the execution of a program, the technical means as a whole has technical character.” Similar to the European Patent Office (EPO), the TIPO’s judgement on the eligibility of a computer software-related patent application focuses on whether the invention produces a technical effect on the whole system.

However, the Current Guidelines have also incorporated old opinions of the United States Patent and Trademark Office (USPTO) before 2014, which took into consideration whether the invention is “nothing more than the idea” of doing that thing on a computer. The excess of concepts combined have led to ambiguities in the Current Guidelines and further result in inconsistencies across judgments.

The New Guidelines introduce Japanese regulations, deleting the concepts “further technical effects” and “simple use of computer,” and instead determines eligibility with two steps:

a. Deciding whether the definition of an invention is met, including:

i. Those concretely performing control of an apparatus or processing with respect to the control;

ii. Those concretely performing information processing based on the technical properties of an object.

b. Determining whether “the information processing via computer software is realized through the utilization of hardware resources”: 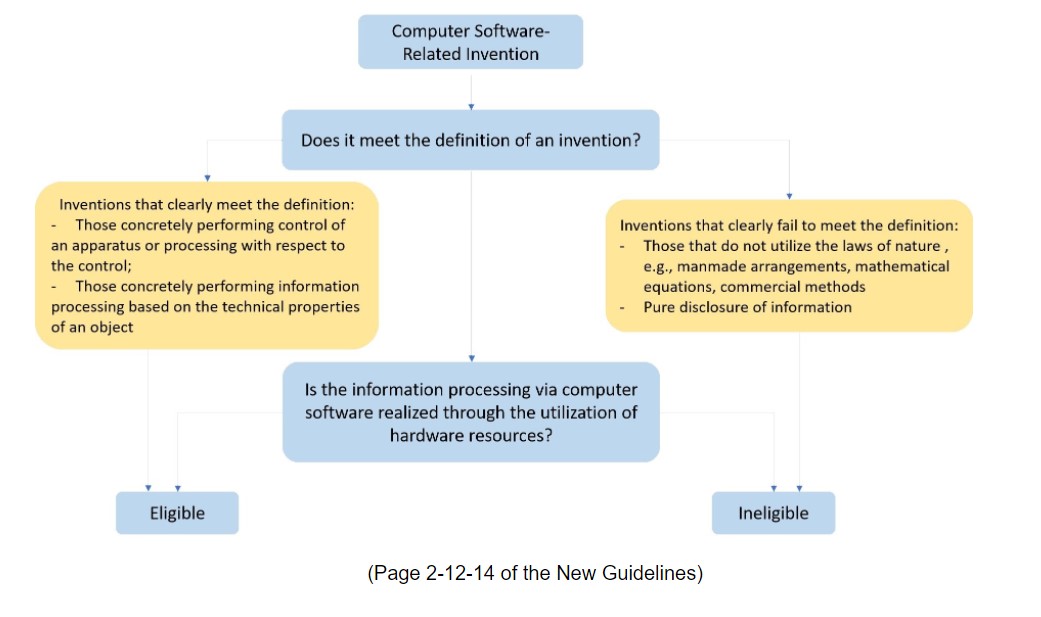 The Current Guidelines discuss the non-obviousness of an invention from the perspectives of “conversion between technical fields,” “addition or replacement of publicly known technical features,” “systemization of human operation methods,” “a software achieving the effects of prior hardware technology,” and “features that make no contribution to the technical effects.”

Unlike the significant changes made to the determination on eligibility, the New Guidelines return to the general requirements listed in part 3, chapter 3 where factors that negate and affirm non-obviousness are taken into consideration. In the Commonality of Operations or Functions section under “Motivation to Combine Multiple Citations,” the amended draft stipulates that: technical means in computer software technology usually have the same function or effect despite being applied in varied fields. If the technical content of the multiple citations contains substantially identical operations or functions with different technical means within the field of computer software technology, commonality in operations or functions still remain even though they are applied in different technical fields.

Furthermore, we see from current court decisions and the TIPO’s examination practice that most applications face obviousness rejections for being a “simple change”. The New Guidelines therefore clearly list out what a “simple change” may include:

a. Conversion between technical fields

b. Systemization of human operation methods

c. Software achieving the effects of prior hardware technology

d. Recreating the common knowledge at the time of filing within a virtual space generated by a computer

e. Application or modification in design based on the common knowledge at the time of filing

f. Features that make no contribution to the technical effects

The New Guidelines have added description and cases of artificial intelligence (AI)-related applications which involve the eligibility, non-obviousness, and written description requirements. It is also highlighted in the New Guidelines that if the AI-related invention is applied in the medical field, the method claims should avoid directing towards diagnostic and therapeutic methods of human beings and animals for the application to be eligible.

4. Stipulating that “object claims” do not necessarily need to be structurally limited

The New Guidelines stipulate that the features of “object claims” do not necessarily need to be structurally limited, but instead may be defined by the functions that could be achieved.

5. Stipulating the burden of proof for a generic placeholder and a means-plus-function language

To accelerate examination, the examiner may first conduct prior art search and comparison based on the interpretation that the claims comprise any apparatus or step that achieves or realizes the function, and then let the applicant either provide proof that illustrates the differences between the technical features of the claims and prior art, or provide reasons why the claims should be interpreted as means- (or step-) function language, and the corresponding structure, material, or acts described in the specification and equivalents thereof.

6. Including decision examples for each requirement

We could see that the new Examination Guidelines for Computer Software-Related Inventions are highly similar to the Japan regulations, and several examples cited in the Examination Handbook for Patent and Utility Model in Japan are also included in the New Guidelines. As a result, one could turn to relevant Japanese regulations and cases for guidance in terms of the drafting of specifications.

We will keep you updated of the latest examination practice of computer software patents after the New Guidelines implemented.