When filing a PCT application, an election must be made of an international search authority (ISA). The ISA, as the name suggests, searches for prior art relevant to the claimed invention and prepares the International Search Report (ISR) and Written Opinion (WO) ahead of the Applicant electing the particular countries or regions for national phase entry. Since the ISR and WO can serve as a baseline for substantive examination by national or regional patent offices, a favorable ISR/WO can lead to favorable examination in the countries selected for national phase entry. This Summer, the World Intellectual Property Organization (WIPO) released its Patent Cooperation Treaty Yearly Review for 2020. This report serves as a bellwether for how applicants worldwide are changing their international patent strategies. With these trends in mind, a strategic decision for an applicant can be based around immediate cost, total cost, and quality as to which ISA makes most sense.

WIPO’s 2020 Review details that the European Patent Office (EPO) issued 32.2% of ISRs worldwide in 2019. Second place went to the National Intellectual Property Administration, China (CNIPA) at 21.0%. The US fell to a distant fifth with only 8.6% of ISRs issued in 2019 and was surpassed this year by Korean Intellectual Property Office (KIPO). While the EPO remains the worldwide favorite, its relative popularity has been decreasing. The percentage of worldwide applicants selecting the EPO has decreased 15% over the past decade. The EPO’s decline in worldwide share is in lockstep with Chinese applicants’ shifting preference for selecting CNIPA. In 2008, CNIPA issued only 3.2% of ISRs, but by 2019 CNIPA issued 21%, an increase of almost 18%.i 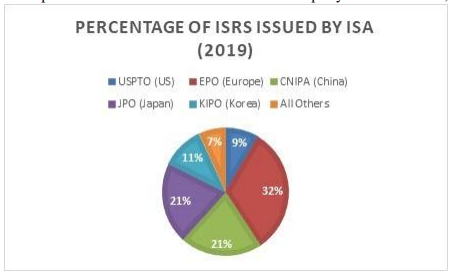 ISA Selection for a US Applicant

Of the ISAs available to a US applicant, which one should be selected in 2020? Cost is a primary driver for many applicants and ISAs vary substantially. In 2020, the US is the most expensive option at $2,080. Russia is almost 75% cheaper at $532. These costs, however, represent only the initial search fee paid when the PCT application is filed. Except for those applicants who are primarily concerned with the immediate costs, these fees should be considered holistically with fees expected to be paid at the national phase entry stage. ii 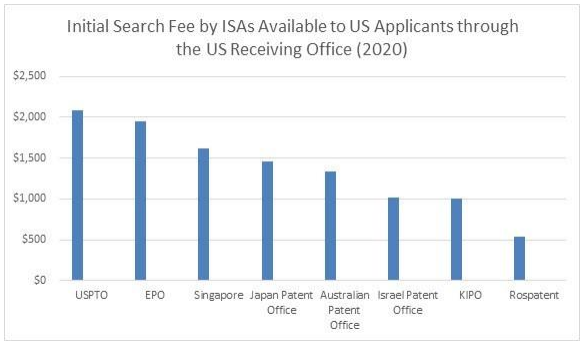 A caveat on the cost for selecting the USPTO to serve as ISA is that the full $2,080 search fee is only for an entity that does not qualify as a small or micro entity. If an applicant qualifies as a small entity, the price is halved to $1,040 and halved again for a micro entity to $520. Therefore, if an applicant meets the requirements of being a micro entity, the USPTO goes from being the most expensive option to the least, but not necessarily overall when national phase entry is factored in.

In some situations, the analysis of which ISA to select should begin and end with cost at the international phase. An applicant may have no idea which countries or regions will be selected, if any, during the national stage. If the applicant is filing a PCT application and is worried about minimizing immediate costs, the selection of Russia results in an up-front savings of over $1,400 over the US and EPO, assuming the applicant does not qualify in the US as a micro or small entity.

Countries such as the US and Korea also offer discounts when selected for both the national phase entry and as ISA. In the US, the discount varies based on issues identified in the written opinion and can result in a discount of up to $1,420. iv Many US applicants file PCT applications after already having filed a patent application in the US. Such applicants would not likely be nationalizing the PCT application in the US and therefore would not be taking advantage of such a discount. Korea offers a discount of 30%v on the demand fee for examination of a national phase application when KIPO drafted the ISR and WO, but since KIPO’s fees are already relatively low, the discounts results in a negligible amount of savings.

The number of inventions claimed in the applicant’s PCT application should be factored into the decision of which ISA to elect. When an ISA performs a search, the applicant is entitled to have only a single invention searched. Whether multiple inventions are identified as present in the application’s claim set is subjective and can vary from ISA to ISA. Anecdotal evidence indicates that the EPO is fairly aggressive in issuing unity rejections that result in fewer than all of an applicant’s claims being searched.

Quality is somewhat subjective to assess, but the majority of practitioners polled at the time this article was drafted prefer the EPO as the gold standard for serving as the ISA. KIPO is generally regarded as second place. The US is generally considered lower in quality that the EPO or KIPO, but better than the pure value play of Rospatent.

If the PCT application is not going to be nationalized in Europe or the US, KIPO makes sense for selection due to its sweet spot of low cost and reputation for high quality. For example, a patent application that is going to be targeted for entry in Asian countries only, KIPO presents a great value proposition. KIPO can further represent a great middle ground for applicants that are unsure on what their future holds and money is relatively tight at the time of PCT filing. For a startup on a limited IP budget, filing ten PCT applications that elect KIPO over the EPO can save the budget close to five figures.

The US makes sense to elect as the ISA in relatively few situations. If the applicant can take advantage of micro entity status and does not intend to enter Europe during the national phase, the US can represent a strong value proposition. Additionally, if an applicant intends to nationalize the PCT application in the US (but not Europe), the US can make sense as an ISA selection even if the applicant does not quality for small or micro entity status.

Russia, as it has in the past, continues to represent in 2020 the pure value play of minimizing costs during the international phase with the understanding that much of the savings will be eroded if the applicant elects to enter Europe, the US, or both during the national stage phase.