A proposed Scoping Plan Update released by the California Air Resources Board (ARB) targets the land use sector and development projects for greenhouse gas (GHG) reductions. The proposed update was spurred by the passage of Senate Bill (SB) 32 and Assembly Bill (AB) 398, which codified California’s goal of reducing GHG emissions to 40% below 1990 levels by 2030 and extended the Cap-and-Trade Program, respectively.

In a shift from prior versions of the Scoping Plan, which largely avoided discussing the California Environmental Quality Act’s (CEQA’s) role in addressing climate impacts from new land use development, ARB recommends that local agencies cut GHG emissions from the land use sector in three key ways:

ARB will consider the Scoping Plan Update at its December 14 meeting.

Although California is on a glide path to meet AB 32’s 2020 target, statewide GHG emissions will need to dramatically decline in order to meet the 2030 and 2050 targets. The state’s population is expected to reach 50 million people by 2050, compared with an estimated population of 30 million in 1990. Therefore, per capita GHG emissions must plummet from about 15 metric tons of CO2-equivalent (MTCO2-e) in 1990 to below 2 MTCO2-e by 2050. In short, GHG emissions have to “fall off a cliff” after 2020, as this chart from ARB [1] illustrates. 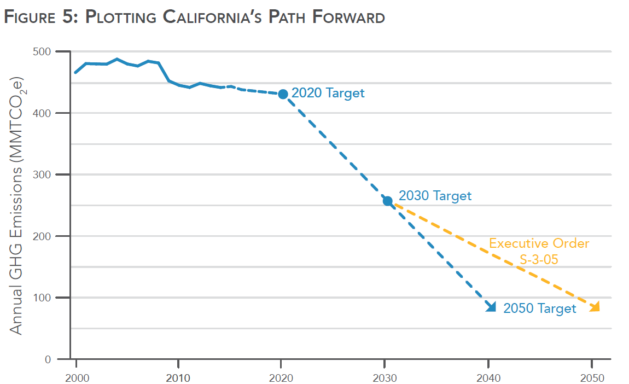 The majority of California’s GHG emissions come from the transportation sector, as the following figure from ARB [2] illustrates. 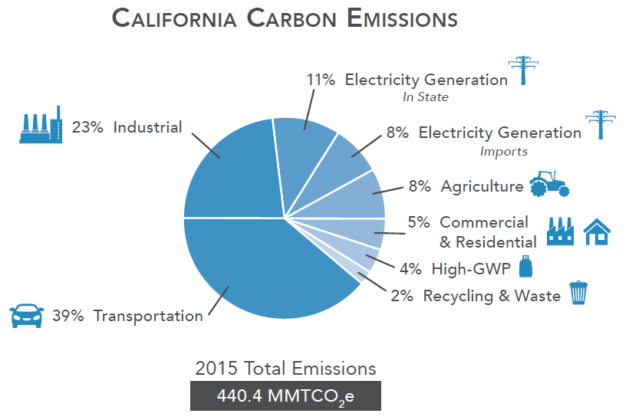 ARB recognizes that the majority of emission reductions from the transportation sector will come from technological advancements and lower-carbon fuels. [3] This position is consistent with a study from a third-party consultant prepared for ARB and other state agencies, which concluded that statewide regulatory programs and sweeping technological advancements are necessary to achieve the state’s long-term climate goals. [4]

The Scoping Plan Update’s recommendations for the land use sector include:

The proposed Scoping Plan Update recommends per capita statewide targets based on California’s 2030 and 2050 GHG goals:

To achieve these targets, the proposal “recommends that local governments evaluate and adopt robust and quantitative locally-appropriate goals that align with the statewide ‘per capita’ targets.” [7] ARB recognizes that climate action plans or other local planning documents can streamline CEQA review for projects:

ARB advises that local governments also develop community-wide GHG emissions reduction goals necessary to reach 2030 and 2050 climate goals. Emissions inventories and reduction goals should be expressed in mass emissions, per capita emissions, and service population emissions. To do this, local governments can start by developing a community-wide GHG emissions target consistent with the accepted protocols as outlined in the Governor’s Office of Planning and Research’s (OPR) General Plan Guidelines Chapter 8: Climate Change. [8]

The proposed Scoping Plan Update provides little guidance, however, on how local agencies can achieve the state’s ambitious per capita targets. Most of the GHG reductions needed to achieve the state’s 2030 and 2050 climate goals are expected to come from statewide regulations (such as the Renewable Portfolio Standard or Cap-and-Trade Program) or technological advancements (such as in electric or renewable natural gas-fueled vehicles) that are largely beyond the control of local governments.

When describing the need for local action to support state climate policy, ARB proposes achieving greater VMT reductions than are envisioned by SB 375:

While the State can do more to accelerate and incentivize these local decisions, local actions that reduce VMT are also necessary to meet transportation sector-specific goals and achieve the 2030 target under SB 32. Through developing the Scoping Plan, ARB staff is more convinced than ever that, in addition to achieving GHG reductions from cleaner fuels and vehicles, California must also reduce VMT. Stronger SB 375 GHG reduction targets will enable the State to make significant progress toward needed reductions, but alone will not provide the VMT growth reductions needed; there is a gap between what SB 375 can provide and what is needed to meet the State’s 2030 and 2050 goals. [9]

It is recommended that local governments consider policies to reduce VMT to help achieve these reductions, including: land use and community design that reduces VMT; transit oriented development; street design policies that prioritize transit, biking, and walking; and increasing low carbon mobility choices, including improved access to viable and affordable public transportation and active transportation opportunities. [10]

For the majority of CEQA projects located in jurisdictions lacking a climate action plan that is consistent with California’s long-term climate goals, the proposed Scoping Plan Update recommends that projects incorporate GHG mitigation to minimize emissions. ARB supports a “no net additional increase in GHG emissions” as “an appropriate overall objective for new development.” [11]However, ARB recognizes that lead agencies may adopt non-zero GHG significance thresholds:

Achieving net zero increases in GHG emissions, resulting in no contribution to GHG impacts, may not be feasible or appropriate for every project, however, and the inability of a project to mitigate its GHG emissions to net zero does not imply the project results in a substantial contribution to the cumulatively significant environmental impact of climate change under CEQA. Lead agencies have the discretion to develop evidence-based numeric thresholds (mass emissions, per capita, or per service population) consistent with this Scoping Plan, the State’s long-term GHG goals, and climate change science. [12]

The proposed Scoping Plan Update recommends GHG mitigation strategies for CEQA projects. ARB “recommends that lead agencies prioritize on-site design features that reduce emissions, especially from VMT, and direct investments in GHG reductions within the project’s region that contribute potential air quality, health, and economic co-benefits locally.” [13] For offsite GHG mitigation, which is allowed under CEQA, the proposal states that “[w]here further project design or regional investments are infeasible or not proven to be effective, it may be appropriate and feasible to mitigate project emissions through purchasing and retiring carbon credits.” [14] The proposed Scoping Plan Update also emphasizes the need to “better ensure that environmental justice communities see additional benefits from our clean air and climate policies.” [15]