On November 19, 2018, Montréal’s municipal council will adopt a by-law implementing the pre-emptive right, or right of first refusal, granted by section 151.2 of the Charter of Ville de Montréal, metropolis of Québec.

The by-law provides for the acquisition of buildings or lands for the following municipal purposes: public way, public space and park, housing, collective or institutional equipment, preservation of heritage building and land reserve.

The by-law reflects the City’s desire to have all the tools necessary to ensure that there is public infrastructure such as schools, parks and libraries in some of the future residential developments.

The mechanics of the pre-emptive right can be summarized as follows:

● the City notifies the owners of the immovables affected and registers the pre-emptive right on the land registry. It remains in force for 10 years;

● if the owner considers alienating the immovable, he informs the City of his intention and of the price and conditions of the contemplated alienation. If part or all of the consideration for the immovable is non-monetary, its value must be objectively estimated. From a timing perspective, the City should be notified after an offer is accepted and before due diligence begins;

● the City can then inspect the immovable and require any information from its owner. It has 60 days, from the notice of the owner, to exercise its pre-emptive right;

● when the City exercises its pre-emptive right, it compensates the buyer for reasonable expenses incurred during negotiations.

The by-law affects the following sites where major residential developments are planned:

● Bellechasse street in the Rosemont borough;

● the racetrack area on Decarie boulevard and Namur street;

● beside the railway tracks between the Plateau and Rosemont;

● the areas of the future Anjou and Langelier subway stations on the blue line;

● the areas of Havre-Bridge and Wellington streets in Pointe St-Charles;

The by-law also grants the City’s executive committee the power to extend or modify the territory affected by the pre-emptive right.

On the affected territory, only offers that are conditional to a waiver of the pre-emptive right should be contemplated.

This new right of the City also raise some concerns.

First, this new power has a long term, 10 years, and a potentially significant territorial scope, given its flexibility and its low cost for the City.

Second, the pre-emptive right makes it risky for an owner to give a favorable price to a strategic buyer, because the City could seize the opportunity to purchase the immovable at a good price.

Third, the pre-emptive right creates delays and uncertainty in the real estate market – which could have a chilling effect on promotors. The City has 60 days to make its decision. This is quite long, considering the swift pace of real estate transactions. It would be commendable if the City could, upon request by the parties, inform them of its intent to exercise or not its pre-emptive right within a much shorter timeframe.

If the City exercises its pre-emptive right, it will have to compensate the owner for reasonable expenses. This marks an improvement upon the pre-emptive rights established by the Cultural Heritage Law and the Act respecting the Société d’habitation du Québec. Neither the by-law nor the Charter of Ville de Montréal specify what will be compensated. We can expect the indemnification to cover costs related to the professional services used to prepare the offer. However, it is unlikely that it will compensate the promotor for the time and energy it spent setting up its project.

Ultimately, it will be up to the City to use its pre-emptive right so as to find a middle ground between public and private planning purposes, such as, on the one hand, social diversity, environment, mobility or access to services and, on the other hand, title value and liquidity and administrative delays and hurdles. 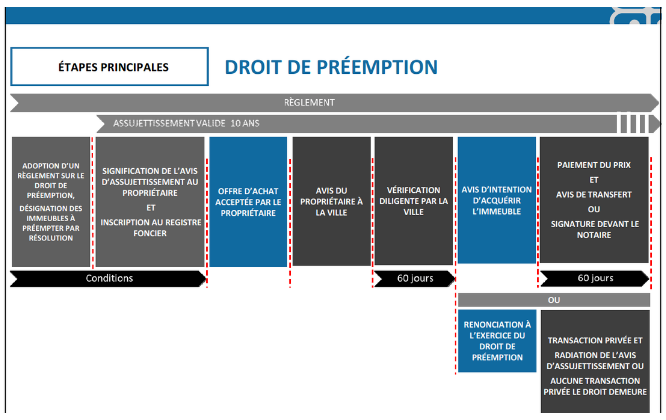