LIBOR Transition - Where Are We At?

Since 5 March 2021 when the United Kingdom’s Financial Conduct Authority (FCA) formally announced (Announcement) the impending cessation of The London Inter-Bank Offered Rate (LIBOR), financial markets and governments around the world have taken action to transition to alternatives reference rates.

There are similarities and differences in the way the transition played out in Hong Kong and Mainland China. In the latter half of 2021, we saw transition accelerate in Hong Kong. Market participants spent considerable resources to prepare for 31 December 2021 – the day all Sterling, Euro, Swiss Franc and Japanese Yen settings and 1 week and 2 month US dollar (USD) settings ceased. The remaining USD settings (being 1, 3, 6 and 12 month tenors) continue until 30 June 2023.

In a similar vein, the PBOC has urged commercial banks to transition from LIBOR and to stop signing new contracts or extending contracts referencing LIBOR. It is, however, becoming clear that in practice, Mainland banks operating out of Mainland China (and the Macau Special Administrative Region) are not strictly prohibited by the PBOC from continuing to use LIBOR.

As a result of LIBOR transition milestones set by the HKMA, all authorized institutions authorised by the HKMA under the Banking Ordinance (Authorized Institutions) now offer products which:

Authorized Institutions are expected not to enter into any new LIBOR contracts after the end of 2021, even though certain LIBOR settings only discontinue after 30 June 2023.

We see the following trends in Hong Kong:

Mainland China – transition urged but not strictly followed in practice

Despite the urge from the PBOC to transition, it is becoming clear that Mainland banks operating out of Mainland China (and Macau) are not strictly prohibited from continuing to use LIBOR in practice.

Mainland banks have shown particular interest in Term SOFR (see more on this below) which in practice, requires a lower level of investment than other options such as the in arrears rates – though many Mainland banks are still yet to obtain the required licence from the CME Group to use Term SOFR.

Financial markets and regulators for each currency have identified their preferred overnight RFRs as alternative reference rates to LIBOR:

LIBOR is a forward-looking rate that is published as a term rate for periods from 1 day to 1 year. Daily RFRs are, however, backward-looking rates that are published overnight only. As a backward-looking rate, unless adjustments are made, the actual amount of interest is not known until the end of the end of the relevant interest period. Furthermore, as an overnight rate, RFRs cannot be used to calculate interest over longer terms such as 1-month or 3-months. To address these differences, various methodologies have been developed to construct RFR-based reference rates to calculate interest, including:

“In arrears” RFR reference rates – the most robust option

“In advance” RFR reference rates – where “in arrears” calculations are difficult

The general view is that overnight RFRs compounded in arrears is the most robust alternative benchmark interest rate. There are, however, certain products which have difficulties applying “in arrears” calculations. For example in receivables discounting products, purchase prices need to be calculated by reference to forward interest rate curves in a discount formula and structures that have debt service accounts require interest to be calculated in advance to permit compliance testing.

The main concern with “in advance” RFR reference rates is that there is a lack of alignment between the interest rate to which the rate will apply and the observation period from which it is taken.

Forward-looking rates are being developed and for certain currencies are already available for use. Where “in arrears” RFR reference rates are historic and reflect actual rates, RFR term rates reflect market expectations on the future movement in the rate over an interest period (but without any premium for credit or term risk). RFR term rates can thus be used to fix rates before the first day of an interest period, similar to “in advance” constructs. 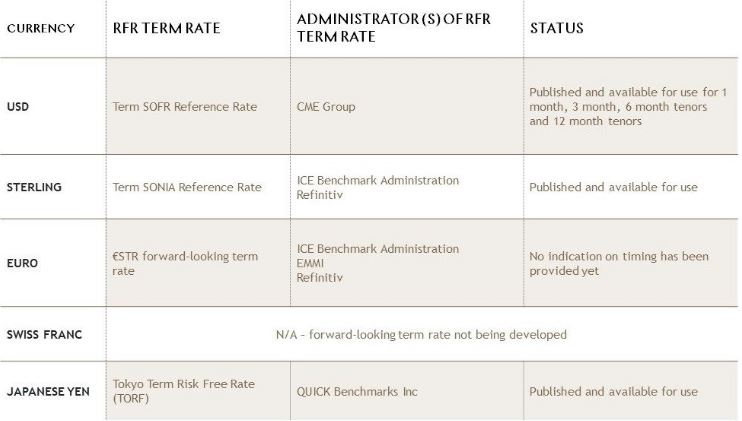