Other changes are afoot, too. Governor Andrew Cuomo has announced that the New York State Department of Labor (NYSDOL) will hold hearings to determine whether tip credits should be eliminated in New York. For more, see our blog post, Governor Cuomo Contemplating Elimination of Tip Credit.

Furthermore, the NYSDOL has released the text of anticipated proposed regulations to the wage order covering miscellaneous industries and occupations (which encompasses most employers other than restaurants and hotels). Under the proposed revisions, an employee who reports to work for a shift not scheduled 14 days in advance must be paid an additional two hours of call-in pay. An employee whose shift is canceled within 72 hours of the scheduled start time, is required to be available to report to work (“on-call”), or is required to contact the employer and confirm whether to report to work within 72 hours of the shift start time must be paid at least four hours of call-in pay. The proposed revisions are in a 45-day comment period scheduled to end in early-January. For details, see our article on exceptions, exclusions, and other questions (some still unanswered), New York Department of Labor Proposes Scheduling Regulations. One such question is whether the proposed state regulations will preempt the New York City scheduling law discussed below.

In late-December 2016, the NYSDOL issued final regulations implementing changes resulting from the minimum wage increases. The new minimum wage law, for the first time, fractured the state into three different geographical regions, each with a separate minimum wage, and set different minimum wage rates for employers in New York City that depended on the size of the employer and whether the employer is deemed a fast food employer. 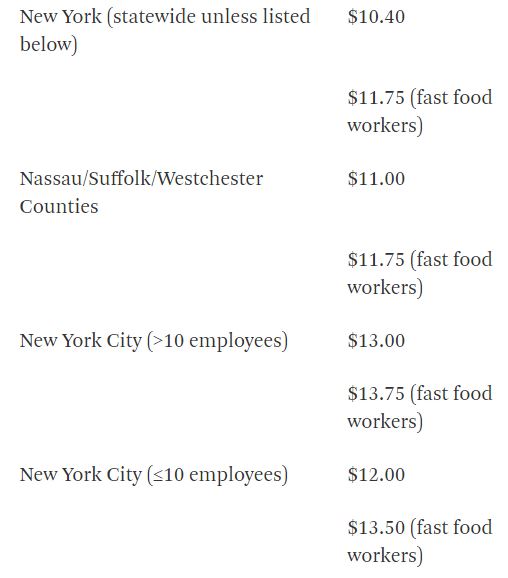 Debate has raged for years over how to pay tipped workers. Some have argued that employees receiving tips earn so much from tips that an additional wage provided by the employer is unnecessary. Others argue tips are too low or sporadic and employers should not be permitted to take a credit for any tips received by tipped employees and employees should be paid at least the full minimum wage, just like other employees. The current law reflects a balance between these competing views, allowing employers to take a credit for a portion of the tips received by tipped employees; the employer pays the tipped worker a reduced cash wage that is then supplemented by tips received by the employee. The rates, however, vary by industry (hospitality vs. non-hospitality), by duties (food service worker vs. service worker), and by location (New York City, Long Island and Westchester, or the remaining parts of New York). No tip credit is available for fast food workers.

For 2018, hourly rates for the hospitality industry (restaurants and hotels) are as follows: 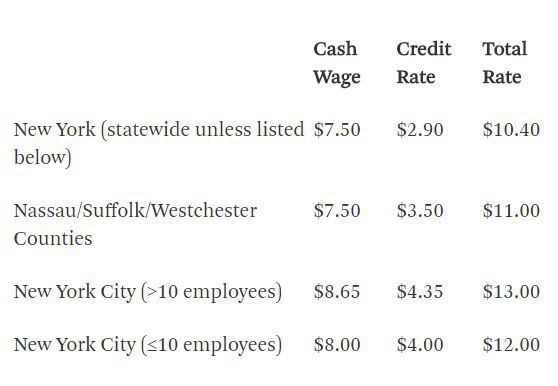 Service Employees (other than at resort hotels) [e.g., delivery drivers] 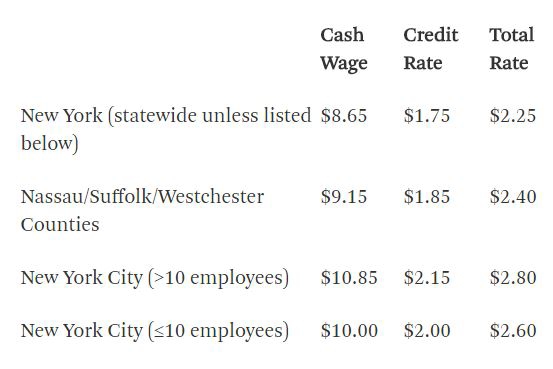 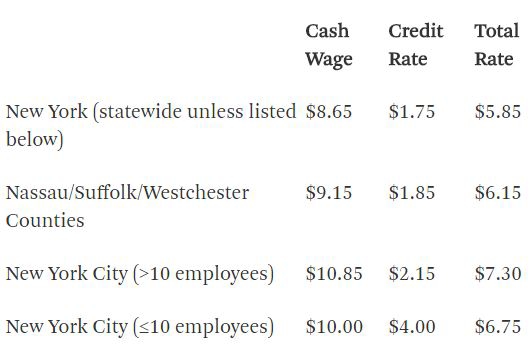 New York’s changes to the minimum salary levels for the administrative and executive exemption are set to go into effect on December 31, 2017. Following are the new levels, which also depend on where the individual is employed and, for individuals employed in New York City, the size of the employer:The federal Department of Labor (DOL) has not published the minimum salary level applicable to exempt “white collar” employees. The Obama-era Rule, which more than doubled the previous level, was held invalid by a federal court in Texas and the DOL is in the early stages of issuing a new rule.

Retail employers in New York City are no longer permitted to schedule “on-call” shifts and must provide retail employees with their schedule at least three days before the employee is scheduled to work. They also are prohibited from canceling shifts without three days’ notice.Going even further than the state, New York City has imposed new regulations on fast food and retail employers. Fast food employers, for example, must provide fast food employees with good faith estimates of expected hours and 14-day advance notice of scheduled hours. They also must give scheduling priority to existing employees when additional hours become available.