Hedges are planted along boundaries in urban areas as privacy screens, as security hedges and as landscaping.

Popular hedge trees are Pines/Conifers and Lilly Pillies, along with Common Bamboo, for high hedges, and Boxwood and Viburnum for low hedges.

Planting hedges can cause disputes between neighbours, but only if a high hedge blocks sunlight or a view does the neighbour have any legal rights to have the hedge trimmed or removed. The hedge owner pays the cost.

In this article, we examine the law that applies to high hedges.

The Trees (Disputes Between Neighbours) Act 2006 (NSW) (the Trees Act) enables a neighbour to obtain court orders to force the hedge owner to prune or remove a high hedge.

Part 2A of the Trees Act deals with ‘high hedges that obstruct sunlight or views’:

(a) are planted (whether in the ground or otherwise) so as to form a hedge, and

(b) rise to a height of at least 2.5 metres (above existing ground level) …

are a hedge of trees.

s 14E     (2) The Court must not make an order under this Part unless it is satisfied that:

(a) the trees concerned:

(i) are severely obstructing sunlight to a window of a dwelling situated on the applicant's land, or

(ii) are severely obstructing a view from a dwelling situated on the applicant's land.

(b) the severity and nature of the obstruction is such that the applicant’s interest in having the obstruction removed, remedied or restrained outweighs any other matters that suggest the undesirability of disturbing or interfering with the trees by making an order under this part.

‘window’ includes a glass sliding door, a door with a window and a skylight, but not a solar panel

The Court requires these jurisdictional tests to be satisfied before it will make orders under Part 2A of the Trees Act:

Usually, a regular pruning order is made for hedges, but an order can be made for removal. Usually the hedge owner pays the cost, but it can be shared with the neighbour affected.

According to the Land and Environment Court of NSW, in 2019 26% of the applications under the Trees Act concerned a hedge severely obstructing sunlight or a view.

MURPHY V MOESKOPS [2021] NSWLEC 1686 (pruning) A hedge of five lilly pillies (an unidentified Syzygium cultivar) planted inside the neighbour’s fence had grown to 4-7 metres high and were overhanging the fence. The hedge severely obstructed sunlight to the large glass door between the living area and the courtyard in the morning. See photo 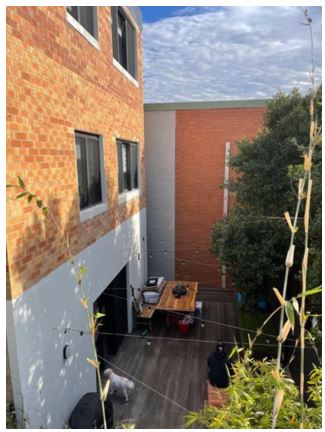 The Commissioner ordered that the tree owner prune the hedge to a height of 3.5 metres annually, and to prune the overhanging branches to the boundary and remove the debris, at their cost.

CARTER V MKTK PTY Ltd [2021] NSWLEC 1787 (pruning & root barrier) A thick hedge of common bamboo (possibly Bambusa vulgaris) had been growing in the courtyard area of the neighbour, the Gladstone Hotel in Stockton for 30 years. It provided ‘visual amenity’. However, it was growing near the boundary of Carter’s property and blocking sunlight to her windows. Carter was successful in her obstruction of sunlight application and the Court ordered the bamboo hedge be kept pruned to 2.1 m.

This suited the hotel which wanted to retain the bamboo, not remove it, but there was a complication. The bamboo was a spreading bamboo, with thick underground roots (called rhizomes), which meant that bamboo shoots were continually growing in Ms Carter’s property.

So, in addition to the pruning, the Court ordered that the hotel install a root barrier on its land ‘extending for the length of the bamboo hedge and a further 2 metres beyond each end of the hedge’.

GLOSSOP V JOHNSON [2020] NSWLEC 1685 (removal) Five years previously, the Johnsons planted bamboo along the common boundary with the Glossops, to provide screening for their new two-storey house. The bamboo grew quickly to be taller than the roof gutters of both the Glossop and the Johnson houses (both were two-storey) and formed a dense screen approximately 6–8 metres tall for a length of some 15 metres along the boundary.

The hedge severely obstructed sunlight to two windows: an upstairs office window facing north, towards the hedge, and a downstairs window at the rear of their dwelling facing west.

Acting Commissioner Cawley noted the unco-operative approach of the Glassops and ordered the removal of the bamboo, not pruning, for these reasons:

“The respondents have been unwilling to prune the bamboo until receiving a copy of the Court application. … The bamboo is likely to require frequent pruning to prevent further sunlight obstruction. It would be an onerous task. The dispute between the parties is unlikely to be completely resolved by orders for pruning, given the respondents’ reluctance to take action until recently. ... Removing the bamboo would avoid the need for pruning, and allow the respondents to plant their garden with species that are more easily maintained and less likely to result in further disputes with their neighbours.”

THOMPSON V QUINE [2021] NSWLEC 1645 (trimming) A row of six lilly pillies grew on Ms Quine’s property along the common boundary. They grew up to 7 metres tall and severely obstructed sunlight to Ms Thompson’s north-facing windows in her dwelling which was on the ground floor of a two-storey building.

“planted to create a dense privacy screen taller than the boundary fence, and were a hedge because they had a combination of some or all of the following features: a linear planting style, trees of a single species or alternate plantings of few species, close and regular planting spacings, foliage of adjacent trees meeting and forming a continuous screen, and the trees may or may not be pruned to a formal shape: see Wisdom v Payn [2011] NSWLEC 1012 at [45]”.

Ms Quine’s other argument was that the Trees Act was not intended to provide sunlight or views that were not available to Ms Thompson when she moved in in 2015. The law is that it must be the applicant who has lost access to sunlight or views, not a previous owner of their property: Jones v Cooper [2020] NSWLEC 1688 at [24]–[29].

After examining photos, the Commissioner was satisfied that sunlight access was available in 2015. The Court ordered the hedge to be trimmed annually to a height slightly above the boundary wall, to restore the situation as it had existed in 2015.

Obstruction of a view

WILSON V NISBETT [2021] NSWLEC 1419 (no order) Ms Wilson had enjoyed a corridor view (between two neighbouring buildings) from her kitchen window at Fairlight across North Harbour since she purchased in 1985. In 2013, her neighbours planted a hedge of lilly pillies which grew to block that view.

The Commissioner rejected the application because the loss of view was minor (not severe): “Most of the water view is still available. If the [neighbour’s] trees obstruct any of that water view, it is perhaps less than 5%. A greater portion of the view is now obstructed by palms growing in the landscape further south of the [neighbour’s] property.”

ROBINSON V NAGEL [2021] NSWLEC 1356 (removal) The Robinsons had water views of Middle Harbour across to Balmoral Beach, over the rear fence of their property, when they purchased in 2009. In 2013, the neighbour (Nagel) began planting bamboo, along and inside the rear fence as a privacy screen. By 2020, the bamboo was at least 4 metres high in places and severely obstructed the water view from the living room of the house. See view loss calculation diagram - 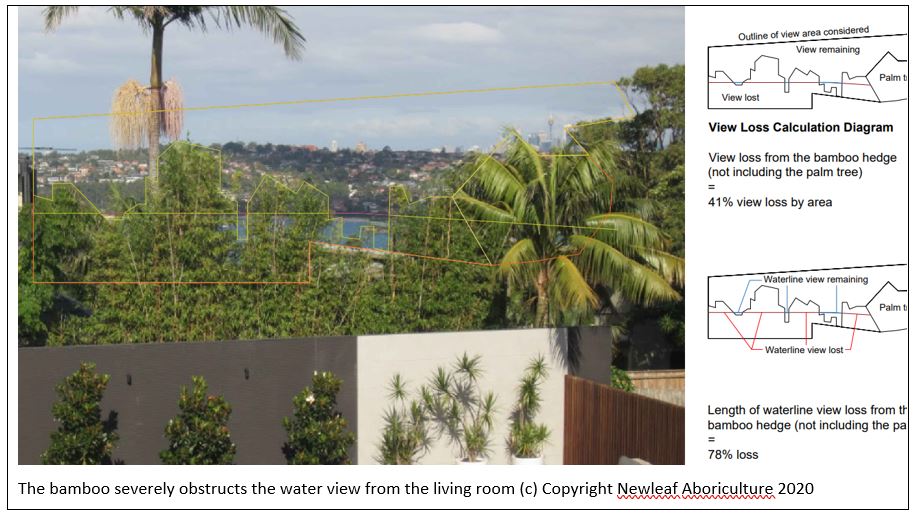 The Commissioner decided that the Nagel’s privacy did not outweigh the removal of the bamboo, considering that the Nagels’ dwelling was more than 30 metres away, the nature of the Nagels’ rooms (which were not living areas) and the extent of the existing screening.

The Court ordered removal, not pruning, so as to provide a final resolution to a long-running dispute. The Court made these orders:

This article is the fifth in a series of five. The other articles are: