It’s a scene playing out every day all over the world: A client goes to her lawyer with a legal problem and asks – “Do I have a good claim?  Should I litigate or settle or just forget about it?”.

The lawyer sits back, realising that this piece of advice is going to be expensive – there are multiple complex contracts involved and a long history of correspondence between the parties.  “Let me take this away. My initial view is you’ve got reasonable prospects.

The lawyer spends days reading and mulling things over, and instructs associates to dig out relevant case law.  The client receives the written advice with a hefty invoice, and turns straight to the executive summary to find the conclusions: “on balance, you have a significant likelihood of succeeding on the contractual claim, and good prospects of succeeding on the negligence claim.”

But what did the lawyer mean by this?

And what did her client understand?

Results from a recent survey by Balance Legal Capital have confirmed that probabilistic phrases like “good prospects” and “significant likelihood” carry highly variable meanings amongst both givers and users of legal advice.

We argue that if lawyers really want to innovate the way they deliver their advice to benefit their clients, the answer is to reduce reliance on probabilistic phrases and to apply % numbers to their views on prospects.

We issued a survey to solicitors, barristers, corporates and other users of legal advice around the world, asking them to put a percentage number against the following ten probabilistic phrases commonly used by lawyers:

The phrases were displayed in a random order each time respondents visited the online survey to reduce any biases that might be induced by the order in which the phrases were presented.

Balance recruited the assistance of cognitive neuroscientist Dr. Stephen Fleming of University College London, to help analyse the data from the 250 responses as at 1 August 2018.

A key result from the Litigation Superforecasting Survey was that there is substantial variability in the way that probabilistic phrases are interpreted.

There was however structure in the data: despite variability, on average, respondents rated “strong prospects” as better than “good prospects”, which in turn was better than “reasonably arguable”, for instance.

TABLE 1: MEAN SCORES FOR EACH PHRASE AND VARIANCE 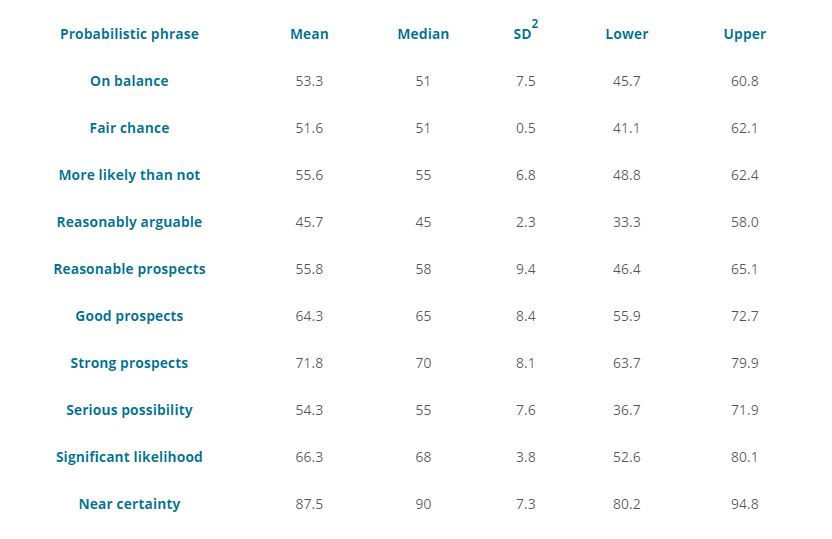 CHART 1: “RAINCLOUD” PLOTS SHOWING ALL SCORES AGAINST EACH PHRASE3 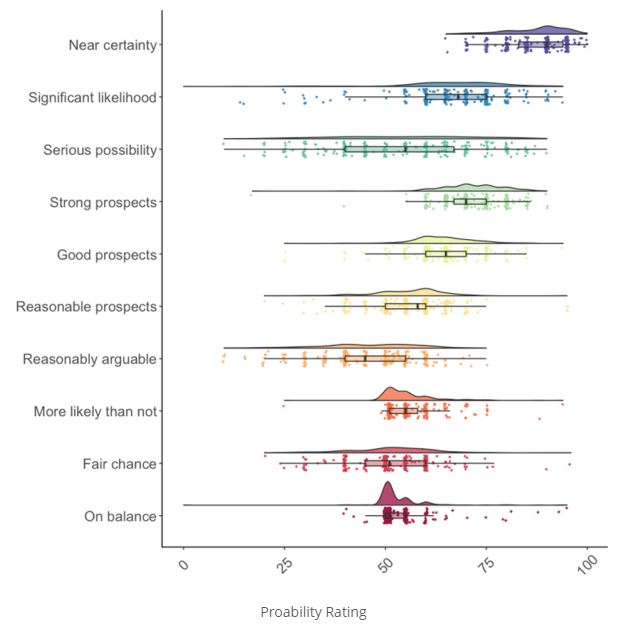 The implications of this data are clear: there is little utility in legal advice as commonly expressed because there is no common understanding in the language used.  If lawyers really want to be clear, they need to use percentage numbers in their prospects advice.  How much money has been spent on legal advice by clients who promptly get the wrong end of the stick?  How many litigation decisions were made under a misapprehension as to what the legal adviser meant?

Take the example given at the start of this article.  The conclusions were “on balance, you have a significant likelihood of succeeding on the contractual claim, and good prospects of succeeding on the negligence claim.”  The survey data shows that the lawyer could mean the contractual claim has prospects as low as 53% but the client could interpret it as 80%.  On the negligence claim, the lawyer might intend to convey “good prospects” at 55% but the client could understand it to mean 73%.

In fact, when the data is split between advisors (solicitors and barristers) on one hand and compared with “advice receivers” (everyone else) on the other, the data shows that advice receivers tend to attach higher probability figures to the verbal labels than “advisors”.

Robert Rothkopf, Managing Partner of Balance, argues that clients should insist that their lawyers provide numbers in their legal advice, and that lawyers should be happy to do so in order to reduce confusion:

“If you are seeking precision in your communications between lawyer and client or simply within your own team, there is almost no point in using these phrases without also disclosing the percentage number you had in mind when you wrote those words.  Without the number, miscommunication and confusion are guaranteed between the writer and the reader. If lawyers really want to innovate the way they deliver their advice to benefit their clients, it is time to use numbers.”

“Balance’s findings have thrown down the gauntlet to all litigators by challenging the utility of the stock phrases lawyers like to use. Without a percentage number, those stock phrases that often underpin, justify or caveat legal advice are pointless”.

In addition to reducing the chance for miscommunication, studies have shown that using numbers rather than vague language actually increases the accuracy of a forecast. This is because the forecaster is forced to consider carefully how he or she is thinking – a process called “meta cognition”. In so doing, the brain is more likely to identify and control for cognitive biases, to switch from over-relying on intuitions and instinct (or ego), and to engage more rigorously with the evidence.

Dr. Stephen Fleming, director of the Metacognition Group points out:

“Studies into metacognition – the ability to think about thinking. have shown that sharing metacognitive estimates of our confidence with each other can improve how groups and committees work together.”

This is also consistent with research by Dr. Adam Harris at UCL, whose studies suggest that numbers are a better communication format than words when dealing with forecasts and uncertainty.4