The repatriation of US cash has the potential to reduce the amount of money that is up for investment, which could have a large impact on M&A activity.

Few countries can match Israel's entrepreneurial might and technological expertise. At the same time, few developed markets are as geopolitically sensitive, and the country is undergoing a period of regulatory change.

While some of these factors are longstanding, our survey indicates that investors' concerns have shifted over the last 12 months. A year ago, 76 percent of respondents cited global economic volatility as a top-three challenge to dealmaking in Israel, overshadowing all other concerns. Macro concerns have since subsided and are now seen as a key challenge for 52 percent of respondents.

But 68 percent now say that regional instability is a top-three concern, compared to 57 percent in our last survey. This comes as uncertainty runs high both within the country and the wider region. Legal challenges faced by Prime Minister Benjamin Netanyahu are contributing to the uncertainty. 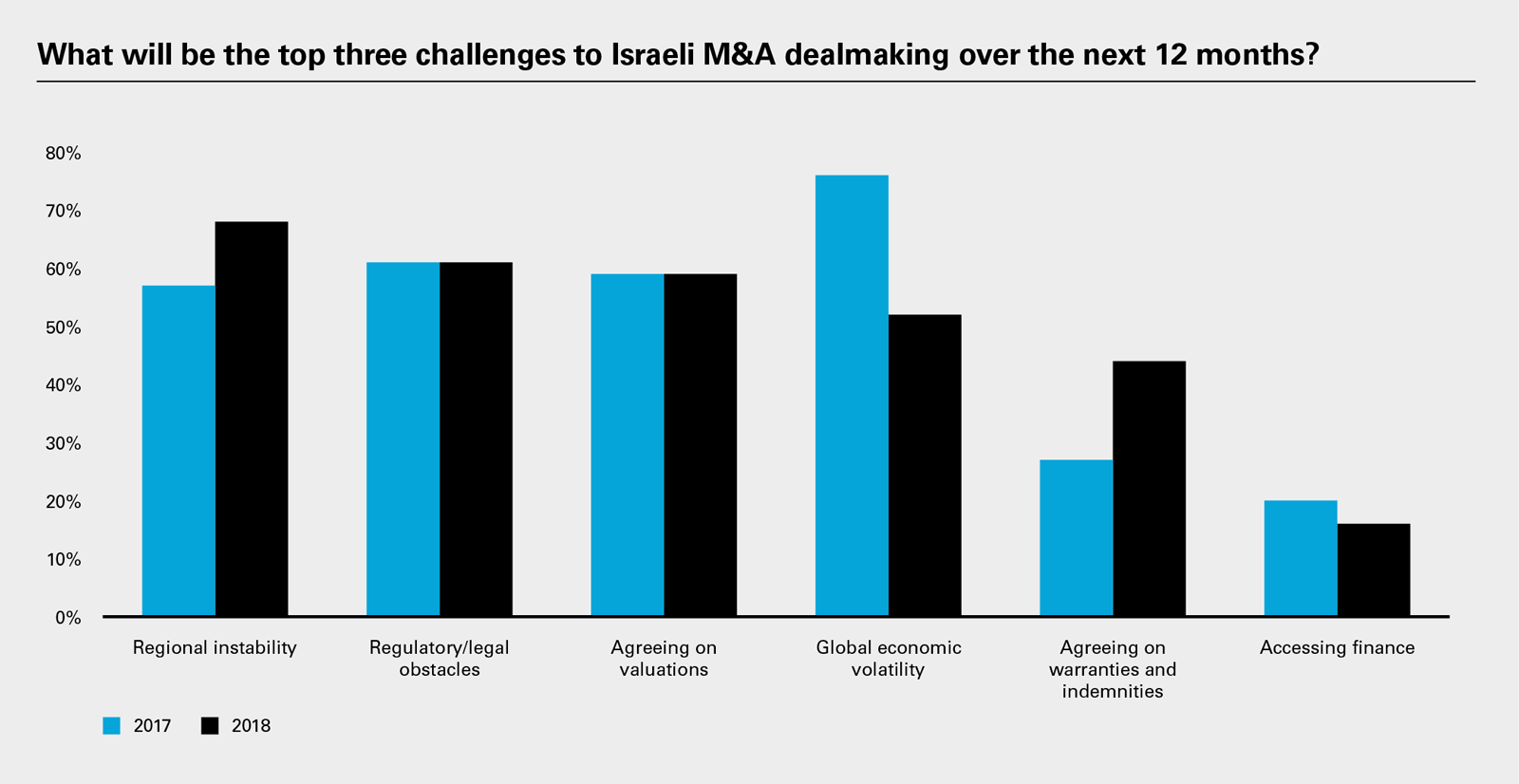 Export of weapons from Israel increased 40 percent in 2017, compared to 2016. In part, this may be due to rising defense budgets around the world. Elbit Systems Ltd., an Israel-based international defense electronics company, expects consolidation in the defense sector. Indeed, Elbit already announced two deals in 2018—its purchase of US-based Universal Avionics Systems Corporation, a maker of flight management systems, and its purchase of IMI Systems, Israel's state-owned weapons maker.

Blockchain holds huge potential, although it is largely yet to be realized.

An overwhelming 96 percent of respondents say that banking, insurance and fund management is likely to be the area of economic activity that will be most disrupted by blockchain over the next five years. Crowdfunding is also ripe for disruption from this emerging technology, according to 54 percent of those surveyed.

Indeed, 57 percent of respondents expect cryptocurrencies to be used by the majority or all of the world's population by 2025.

This is despite the fact that certain regulators around the world have taken regulatory positions adverse to cryptocurrency usage, including, in some cases, banning local trading platforms. A major concern for regulators continues to be compliance with securities, commodities, anti-money laundering, consumer protection, and tax laws by cryptocurrency ecosystem participants. Regulators in other jurisdictions, though, are keen on ensuring regulation does not unnecessarily burden the growth of the cryptocurrency-based sector of the economy, and are working on updating their legal regimes to accommodate DLT and other emerging technologies.

In December 2017, the Israel Securities Authority proposed blocking new listings of companies whose business models are based on cryptocurrencies and suspending those already trading on the Tel Aviv Stock Exchange. But a report published by the Israel Securities Authority in March 2018 made a distinction between so-called "utility tokens" and "security tokens," a development that was welcomed by many blockchain advocates, leaving room for the possibility that some blockchain tokens would not be regulated as securities in Israel.

Regulators in the US seem likely to take a harder line, although it is far from clear where they will come down at this early juncture. During congressional testimony in February 2018, US Securities and Exchange Commission (SEC) chairman Jay Clayton said that "I believe every ICO [initial coin offering] I've seen is a security." The SEC had already indicated publicly that it considered tokens issued by certain issuers, The DAO and Munchee Inc., to be securities. And in late February, the SEC issued subpoenas and requests for information to dozens of people and companies involved in ICOs, presumably to determine the status of tokens they issued. At the same time, the SEC continues to encourage potential issuers to work with SEC staff in the design and issuance of tokens, and SEC staff are actively working with numerous token issuers to determine the security or non-security status of new tokens. 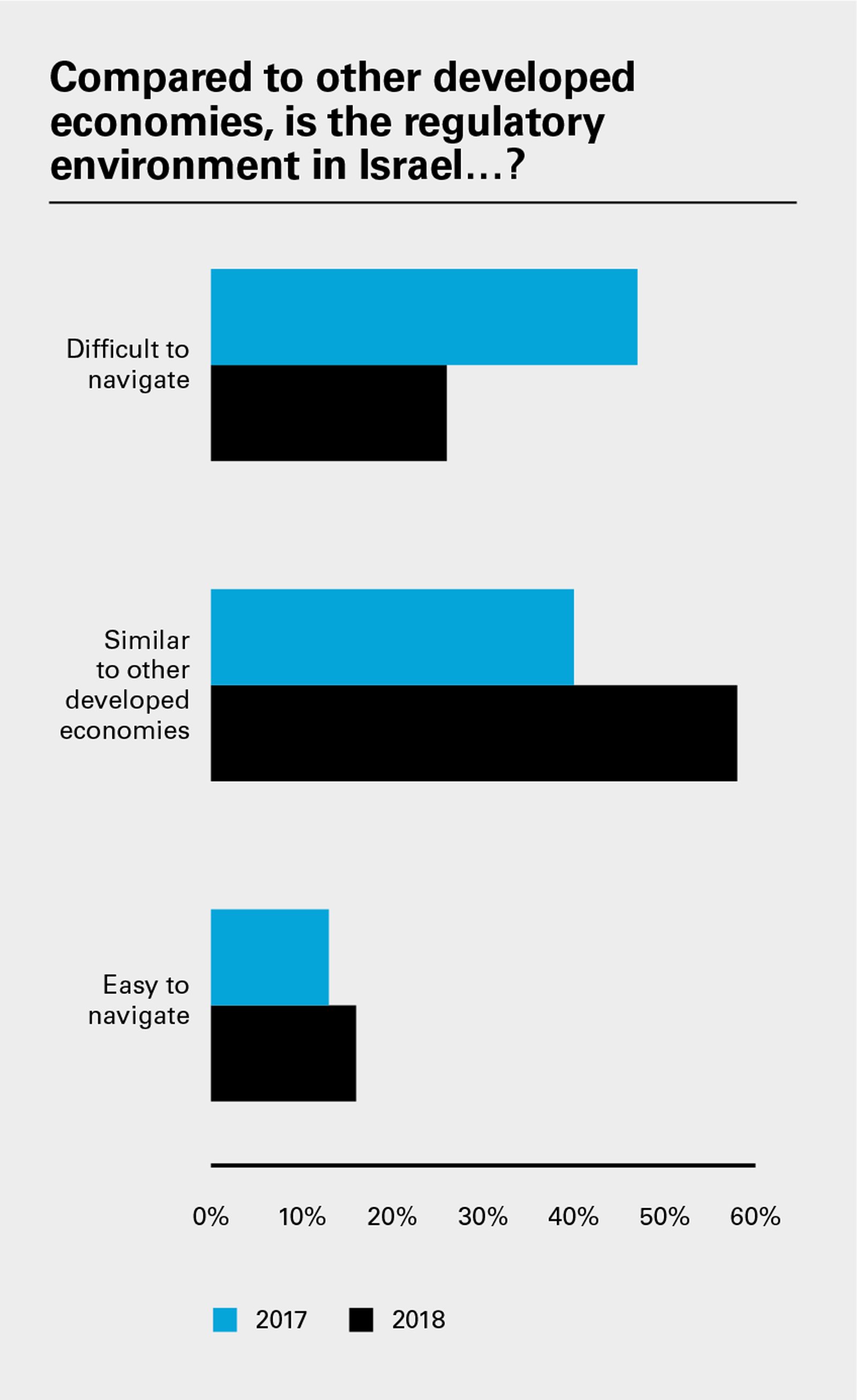 Our survey clearly shows that the regulatory environment in Israel is improving. Only 26 percent of respondents say that Israel's regulatory regime is harder to navigate compared with other developed countries, way down from the 47 percent who said the same last year.

In 2018, after a few years of perceived regulatory uncertainty, the Bank of Israel provided clarification on a number of points related to M&A in the credit card context, including criteria for potential acquirers, expected timelines for the approval process, and the ongoing regulatory framework. This has been encouraging. Also important, two of the most prominent regulators in Israel are expected to be replaced this year, the Governor of the Bank of Israel and the Commissioner of Capital Markets, Insurance and Savings.

Possible drag from US tax reform

The United Nations estimates that the recent US tax reform, the largest of its kind in over 30 years, could bring almost US$2 trillion back to the United States as firms repatriate cash from foreign affiliates.

Respondents to our survey suggest this could affect M&A in Israel. "The repatriation of US cash has the potential to reduce the amount of money that is up for investment, which could have a large impact on M&A activity," says the director of strategy at an Israel-based company.

Tech is still on top

Perhaps unsurprisingly, an overwhelming 91 percent of respondents said that technology and media will hold the crown as the most appealing sector for investors over the next 12 months. Eighty-five percent said the same in last year's survey.

Delving into the types of tech companies most likely to attract investment dollars, cybersecurity stands out for 56 percent of respondents. Global attacks such as WannaCry and NotPetya have brought cyber risks into sharp focus, creating greater demand for cybersecurity firms' products and services.

Israel's government has committed to advancing its cyber capabilities to remain vigilant and the country has developed an ecosystem of cyber start-ups and produced some of the sector's leaders, such as Check Point Software Technologies.

"Cybersecurity and application development are the two sub-sectors that are most appealing to acquirers in Israel," says an executive of a corporate. "The level of cybersecurity technology is phenomenal in Israel and the world is desperately seeking this technology."

Growing investment in the auto-tech industry continues to be a key influencer of Israel's M&A activity. Intel's landmark US$15 billion acquisition of Mobileye put Israel on the global map as a leader for autonomous driving technology. Later in the year, the US$450 million acquisition of Argus, the developer of technology which guards autonomous vehicles against cybersecurity threats, by German car parts manufacturer Continental, reflects a rising demand for cutting-edge technologies within the industry. And the pipeline for deals looks healthy, with the recent opening of R&D facilities within Israel by international companies such as Daimler, Skoda and SEAT indicating that innovative technologies will continue to come to market.