It has been more than two months since China’s new Foreign Investment Law (FIL) was passed at the second session of the 13th National People’s Congress (NPC) of China on 15 March 2019. Some thought the FIL was an indication that the US-China trade talks would soon be wrapped up. This is unlikely. Despite this the FIL has shown China reiterating a willingness to deepen reform and open up its economy.

The FIL, to be effective on 1 January 2020, is largely welcomed globally. It shows the Chinese government’s addressing concerns voiced by international companies such as forced technology transfers; level playing field for foreign invested companies; protection of intellectual property rights and access to public procurement projects.

In respect of improving the protection of IP rights China has emphasized – as much for its internal development as to placate overseas rights holders – on improving the rights of IP holders as well as the enforcement of such rights. Problems still exist but the situation is far better than it was even 5 years ago. China’s government also moved to remove requirements that forced technology transfers (i.e. time limits; continued use after expiration; ownership of improvements; etc.).

Promulgated at the early stage of China’s reform and opening-up, the Three FDI Laws have laid a solid foundation to attract foreign investment. By the end of 2018, around 960,000 foreign-invested enterprises (FIEs) had been set up in China, and the actual use of foreign capital had exceeded 2.1 trillion US dollars. China’s actual use of foreign capital in 2018 reached 134.97 billion US dollars (excluding bank, securities and insurance section), about 12 times the amount in 1992 and 150 times the amount in 1983, now ranking second in the world.[i]

Despite the tremendous contribution, the Three FDI Laws have gradually fallen behind the dynamic market reality and could hardly address the emerging challenges with respect to foreign investment. For example, the Three FDI Laws mainly focus on greenfield investment (i.e. foreign direct investment), while other forms of investment, such as M&A and capital increase subscription, are not covered. In addition, the inconsistency between the Three FDI Laws and China’s Company Law becomes apparent over the years, especially the inflexibility of corporate governance under the JV Laws has tied over 300,000 Sino-foreign joint ventures in China.

A few regulations have been passed with the attempt to fill the gap left by the Three FDI Laws. In the autumn of 2013, Chinese government launched the first free trade zone in Shanghai which carried out a pilot scheme including pre-establishment national treatment with a negative list with the aim to further opening up and simplifying administrative procedures for foreign-invested enterprises. For this purpose, certain articles of the Three FDI Laws have been ceased to operate within the Shanghai free trade zone. As the pilot scheme went smoothly, the experience was afterwards spread nationwide and on its fifth anniversary in 2018, there were a total of 12 free trade zones in China.

There has already been a noticeable trend in China over the last 20 years of the authorities opening China’s market to foreign investment. The world’s biggest market still presents challenges but for most sectors there are limited legal hurdles to overcome. Most sectors are already open to foreign investment (i.e. no prohibition or requirement to have a Chinese partner) and indeed most FIEs established in China are wholly foreign-owned enterprises (WFOEs).

Below we set out the key impact of the FIL on existing FIEs:

As noted above, the FIL will replace the Three FDI Laws from 1 January 2020 and by that time the organizational form, corporate structure and operating rules of new FIEs will be subject to the China’s Company Law and the Partnership Enterprise Law[ii] For existing FIEs, they can remain their corporate structure etc. unchanged for five years starting from the effectiveness of the FIL, i.e. 1st January 2020.[iii]. Upon the expiration of the 5-year transition period, all FIEs shall be governed by PRC Company Law or the Partnership Enterprise Law. Given partnership is barely adopted in practice for joint ventures, most FIEs will need to follow the Company Law.

We believe the FIL will have very limited impact on WFOEs on corporate governance as the organizational form and corporate structure of WFOEs have been governed by the Company Law since 2006. In accordance with an implementation opinion published by four China ministerial authorities on 24 April 2006[iv], corporate governance of the WFOEs should follow the Company Law, including that the highest authority of a WFOE should be the board of shareholders rather than the board of directors.

In contrast with the WFOEs, the FIL will have a major impact on the existing joint ventures. The main reason is that the organizational form and corporate structure under the JV Laws are radically different from those set out under the Company Law. The one constant is that corporate governance in China JVs protects minority shareholders; constrains freedom of contract and absence of agreement will normally lead to gridlock and an inability to move forward. The coming changes will allow existing joint ventures to be restructured (subject to the caveats outlined here) to models that better allow for the majority shareholder to take decisive action.

Below table shows the key difference on the corporate structure and governance under the JV Laws and the Company Law: 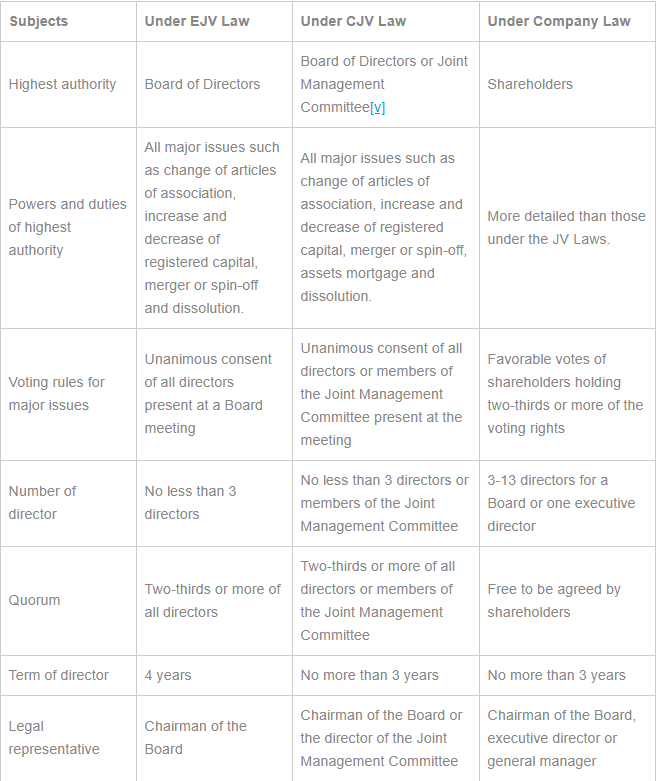 From the table above, it is clear that in the 5-year transition period from 1 January 2020, the key things such as the highest authority, voting rules for major issues, quorum, share transfer mechanism and dividend distribution of a joint venture will need to be changed to comply with PRC Company Law.

We understand that implementation regulations of the FIL are already being prepared by the Chinese government forthwith the pass of the FIL on 15 March 2019. Before any implementation regulations for the FIL is issued, most of the stakeholders may adopt a wait-and-see attitude. We do not expect there will be many specific guidelines addressing how to complete these changes on corporate governance for the shareholders of the joint ventures. Both foreign and Chinese investors will have to work it out by themselves based on their shareholding, role in the joint ventures, dependency on the other party as well as their bargaining power. Foreign investors seeking to build a majority in an existing joint venture will likely need to leverage their financial strength (i.e. attractive purchase price); support for the joint venture (i.e. introduction of state of the art products); or other aspects of leverage that will vary from case to case. The truly practical solution may have to be on a case-by-case basis and the ultimate objective may only be reached through commercial negotiations.

The foreign debt quota for FIEs has been calculated based upon the difference of its registered capital and total investment for more than 30 years.[vii] After pilot schemes and modifications since 2016, the People’s Bank of China (PBOC) published a notice on 12 January 2017 introducing a nationwide regulation mode of all-round cross-border financing (the “Notice”)[viii]. Under this new mode, the approval procedures are more convenient and the foreign debt quota might be higher (but to be honest the calculation formula under the new mode is a bit complicated). The Notice provides a one-year transition period (which is due in early 2018) and the final regulatory mode has not been issued by PBOC and SAFE.After the effectiveness of the FIL, it is uncertain whether the concept of “total investment” will still exist and whether the foreign debt quota will still be subject to the difference between the total investment and the registered capital of an FIE or it will be replaced by the new mode introduced under the Notice.

The transfer of funds offshore is still restricted but it is important to note that the Chinese authorities have not blocked legitimate repatriation of dividend payments. In recent years measures have been tightened at times but this situation may be greatly improved after the effectiveness of the FIL. According to Article 21 of the FIL, foreign investors will be free to remit such as profits, capital gains, income from asset proposal or intellectual property royalties outside of China in accordance with PRC law. We do not expect that the foreign investors can be “totally free” to remit funds in or outside of China. However, we do expect that foreign investors will enjoy more convenience when remit their profits outside of China.

The FIL will have a direct impact on existing JVs especially on their corporate governance. We believe the shareholders of the existing JVs should now start considering how to adapt the upcoming changes for their JVs and make it hopefully a win-win situation.

Below are some suggestions for the shareholders of the joint ventures in considering the prospective changes:

1. Evaluating your bargaining power and considering your core interests

Many shareholders of the joint ventures may resist the change of the corporate governance if they are minority shareholders or if they are in 50:50 shareholding structure with their partners, in which case, the parties may have to consider how to preserve the current corporate governance under the JV Laws in the corporate governance under the Company Law.Under the JV Laws, a minority shareholder or 50:50 shareholder actually has the veto right on Board meetings on major matters (such as change of articles of association, increase or decrease of registered capital, merger or spin-off and dissolution) based on the requirements for unanimous consent of directors attending the Board meeting under JV Laws, such arrangement can also be achieved in shareholders’ meeting by requesting 2/3 or more voting rights for the said key matters.

3. Getting prepared for dialogue with your partner

For the joint ventures which are still in the process of establishment and intend to close the deal before the effectiveness of the FIL, the parties may also need to dialogue with each other on the future changes on the corporate governance. To save another rounds of new negotiations, the parties may prepare additional clauses or a supplementary agreement on how to change the corporate governance according to Company Law (e.g., whether unanimous consent will be required for certain key matters) so as to ensure a smooth transition in the future.

4. Taking into account China’s further opening up on foreign investment

As stated above China has been on a long journey of foreign investment liberalization. It is likely that over the five-year transition period China’s Negative List for sectors that are prohibited or restricted to foreign investment will continue to become shorter. Recent examples in 2018 included the lifting of foreign ownership restrictions in auto manufacturing and financial institutions. Last year when the similar restrictions were loosened, Tesla immediately signed a deal to set up a wholly foreign-owned car plant in China[xi] and UBS doubled its shareholding ratio in a securities joint venture[xii].

Therefore, for certain restricted sectors, shareholders of the joint ventures should continue to monitor the advantages that may arise from China’s further relaxation on foreign investment. Investors new to China that are in the process of establishment should ensure that the contracts take advantage of future loosening of restrictions.

On 18 March 2019, just three days after the passing of the FIL, Chinese Premier Li Keqiang executed the Decision of the State Council on Revising Certain Administrative Regulations (State Council Decision).

This State Council Decision is in line with the principle of the FIL and to some extent shows the Chinese government’s determination to address the concerns of foreign investors with regard to forced technology transfer.

（2）Implementation regulations and further opening up

Premier Li Keqiang also revealed that China will further loosen foreign investment’s market entry into China. A new and shorter Negative List is expected to be issued this June 2019. In addition, China will expand the opening up in certain sensitive areas such as value added telecom services, medical institution, education and transportation.