As the post-Brexit transition period comes to an end on 31 December 2020, options to ensure compliance and uninterrupted trade for businesses placing chemical substances and mixtures on the UK and EU markets are becoming considerably limited. However, there is still time to take the necessary steps, such as transferring EU REACH registrations, to maintain immediate access to the EU and UK markets with minimal expense.

Businesses that do not directly manufacture or trade chemicals but use chemical substances in their products, such as cosmetics, medical devices, EEE or industrial applications, may also be impacted if their suppliers have not taken necessary action.

To find out more about how Brexit will affect your business or to ask specific questions, please join a panel of experts for a Brexit REACH Q&A session in cooperation with the Minor Metals Trade Association. You can send your questions in advance to McDermott regulatory counsel Raminta Dereskeviciute.

Raminta Dereskeviciute will also be speaking at the Chemical Watch webinar on Post-Brexit Options for UK Chemicals Law – Part 2 on 23 November 2020 (Register here with a 15% discount code MWE15).

The UK Government’s negotiating document published in May 2020, the draft Comprehensive Free Trade Agreement (CFTA), sets out guidelines for the new UK regulatory regime for chemicals. CFTA Annex 5-E confirms the UK and the EU authorities’ commitment to cooperate on chemicals compliance and reiterates the importance of the UN globally harmonised system as well as OECD scientific and technical guidance. However, Annex 5-E clearly sets out that the United Kingdom will be “setting its own priorities on chemicals regulation, including establishing its own levels of protection in respect of the environment, and human and animal health” going forward, including having independent rules on trade.

It is most likely that the United Kingdom will retain its commitment to an “independent regulatory regime for chemicals” even if a trade deal is achieved with the European Union at the last minute.

The EU REACH Regulation requires importers and manufacturers placing chemical substances on the EU market above one tonne per year to register such substances with ECHA. The last REACH registration deadline in the European Union was in May 2018, which means that the majority of businesses involved in the manufacture or import of chemicals in the European Union, including the United Kingdom, are not able to sell such chemicals unless they have existing REACH registrations.

ECHA’s guidance for UK businesses holding REACH registrations has not changed since our previous alerts: on 1 January 2021 such registrations will be void, and the UK registrants will lose access to their REACH-IT accounts unless the registrations are validly transferred to an EU entity before the end of the transition period.

In principle, before the transition period is over, UK manufacturers can appoint Only Representatives (ORs) to take over their REACH registrations, UK importers can relocate their business functions to a new or existing EU group entity alongside with the REACH registrations, and non-EU manufacturers with an OR in the United Kingdom can appoint a new representative in Europe. However, transfers must be made in accordance with REACH and ECHA’s guidance:

With so little time remaining, UK-based registrants that have not yet taken action should do so promptly, particularly if a new entity in the European Union must be established. Certain EU jurisdictions have longer lead times as well as hefty requirements for incorporation of a company, and thus considerations must be made on the costs and timing.

In addition to transfer of the REACH registrations, ECHA’s recent Brexit guidance takes into account the Protocol on Ireland and Northern Ireland, and provides further advice to the UK entities on Poison Centre notifications post-Brexit, transfer of authorisations under the Biocidal Products Regulation, and changes with respect to classification and labelling.

The EU REACH Regulation provisions are by-and-large retained in the new UK legal act “REACH etc. (Amendment etc.) (EU Exit) Regulations 2019″ (UK REACH), as amended. Registration, evaluation, authorisation and restriction obligations are also set to apply under UK REACH, as are the classification and labelling rules based on the UN globally harmonised system.

UK Health and Safety Executive (HSE) will take over ECHA’s functions in the United Kingdom and act as the lead regulatory authority under UK REACH. HSE’s new responsibilities will include evaluating applications for registrations, coordinating the Candidate List of substances to be evaluated for authorisation, and evaluating restrictions. The Secretary of State will take over some functions currently performed by the European Commission, for example deciding on whether applications for authorisations should be granted.

To support the functioning of the new UK regime, the UK Department for Environment, Food and Rural Affairs (DEFRA) has been developing the United Kingdom’s own REACH-IT portal, “Comply with UK REACH”. The new UK IT system, set to go live on 1 January 2021, will use the same software platform as REACH-IT (the International Uniform Chemical Information Database, or IUCLID).

UK REACH will be enforced by DEFRA and the Department for Business, Innovation and Skills as well as the Devolved Administrations for Scotland, Wales and Northern Ireland. It is yet to be seen how the penalties will change from those currently in force, if at all.

In an attempt to minimise disruption, UK REACH foresees transitional provisions for the registration of chemical substances placed on the UK market, and rules for downstream users purchasing such substances from non-UK suppliers as well as covering other regulatory processes in relation to restrictions, authorisations or identifications of substances of very high concern (SVHC). Whether companies can take advantage of these transitional provisions will depend on their role in the supply chain and which jurisdiction they are established in. HSE and DEFRA recently published further guidance on how each actor in the supply chain can prepare for the end of the transition period, although such guidance so far still remains rather basic.

EU REACH registrations held by UK entities can be carried across to UK REACH-IT (grandfathered) by opening an account on UK REACH-IT and submitting the required information to HSE by the deadlines set out in the table below. UK entities that held EU REACH registrations at any time in the period between 29 March 2017 and 31 December 2020 will also be able to benefit from the grandfathering provisions, even if such registrations have been transferred to an EU entity before 31 December. UK downstream users relying on an EU REACH registration will be able to continue importing after 1 January 2021 but will need to notify HSE using a Downstream User Import Notification (DUIN) by 27 October 2021.

Similar grandfathering provisions will apply to EU REACH authorisations held by UK-based entities or relied upon by UK-based downstream users. Article 9 exemptions (PPORDs) will also be carried over into UK REACH provided HSE is notified with the relevant information.

No grandfathering is foreseen for the REACH registrations held by EU-based entities that export substances to the United Kingdom. If such entities want to place substances on the UK market, they will need to make an inquiry with UK HSE and a subsequent new registration through a UK-based OR (if they are a manufacturer), by establishing a new UK entity acting as an importer, or by asking their UK-based customers to register.

Although HSE has provided no guidance yet, it is possible that in practice EU-based entities will not have to register until 2023, 2025 or 2027, respectively, as imports of such substances will be covered by the downstream users notifying to HSE. However, it remains unclear what action such entities should take if they wish to register before the established registration deadlines but no “lead dossier” has yet been submitted. Unfortunately, new entrants to the market without any prior REACH registration will find themselves in a similar situation.

In any event, all registrations which are not grandfathered will be subject to the same fees as currently charged by ECHA, ranging from approximately £1,000 per substance for the smallest tonnage band to £25,000 for the highest tonnage band registrants.

We summarise the key deadlines and the differences in certain regulatory processes between the EU and UK REACH regulations below. 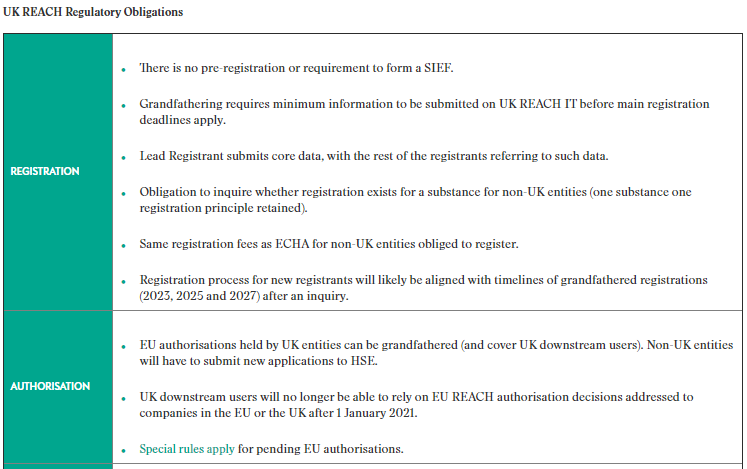 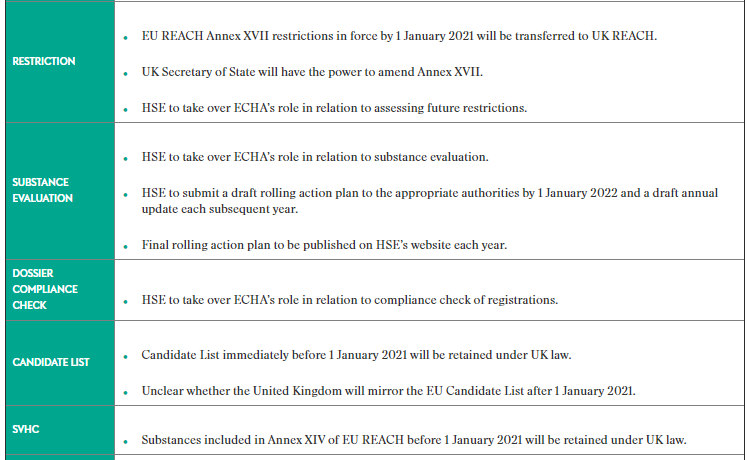 When grandfathering EU REACH registrations or registering from scratch as a UK manufacturer, importer or OR, EU REACH data must be transferred to the UK REACH-IT system for the review of UK authorities. There will have to be an agreement between the registrants as to who submits the data first, who can refer to it and how, as well as whether such legitimate access to data for purposes of UK registration will cost. Lastly, it will have to be determined who manages such data transfer and the UK REACH joint submission of data and—where consortia managers exist—how such work should be compensated. It is unlikely that any data sharing/consortia agreements grant powers to their managers to deal with UK REACH, and therefore the role and scope of their activities will also have to be reviewed.

Existing REACH Letter of Access agreements or Letters of Access for consortia members (where they exist) will likely only grant legitimate access to data for the purposes of EU REACH registrations. It will be a matter for individual companies to negotiate with their respective Lead Registrants or REACH consortia to determine whether the scope of the existing Letters of Access can be expanded to include UK REACH, or whether new Letters of Access will need to be granted, including the remuneration for such new access to UK REACH data. Similarly, where EU REACH dossiers rely on third-party data, Lead Registrant/REACH consortia will need to review their data sharing agreements and, where necessary, initiate data sharing negotiations.

Companies are reminded that the EU Implementing Regulation on Joint Submission of Data and Data Sharing should also be retained in the United Kingdom and as a result, data and cost sharing will have to follow the rules of transparency, non-discrimination and fairness, as well as provide detailed breakdowns with respect to the data costs where no waiver is agreed to.

It is also worth mentioning that new data constantly becomes available, including data currently being developed for purposes of complying with Korea REACH. As UK REACH will require registrants to take all available data into consideration when registering, the availability of new data in itself will be a new challenge when conducting available data review and negotiating costs for access to such data.

In conclusion, it is essential that companies requiring UK REACH registration start addressing data transfer issues as soon as possible so that all of the above issues are effectively addressed in time for the first registration deadline at the latest.

We urge any company currently dealing with chemicals in the UK market to review how Brexit will affect them. Below are some practical steps to assist companies in reviewing their position:

Please note that as the situation with respect to the UK-EU negotiations is constantly evolving, the transitional provisions and deadlines set out above may be subject to change.

To view all formatting for this article (eg, tables, footnotes), please access the original here.
McDermott Will & Emery - Raminta Dereskeviciute and Ludovica Rabitti
Back Forward