In a recently published judgement of 31 December 2020 (HG 20 87), the Commercial Court of Bern dismissed a request for a preliminary injunction which Kraft Foods had filed against Cocoa Luxury’s SWISSONE chocolate bar. Kraft Foods had claimed that the SWISSONE chocolate bar infringed its various TOBLERONE trademarks and it also asserted unfair competition claims. The court denied both trademark infringement and unfair competition claims. As for now, the judgement on preliminary measures has become final. Kraft Foods is however still free to file a lawsuit on the merits.

TOBLERONE is a popular Swiss chocolate bar brand, which is most known for its distinctive shape: a series of joined triangles, resembling a group of mountains or pyramids. The TOBLERONE shape is registered as a three-dimensional trademark in Switzerland (No.2P-432512). TOBLERONE is further known for its triangular packaging in beige/creamy yellow color with the red TOBLERONE logo in the silhouette of the Matterhorn mountain in grey: 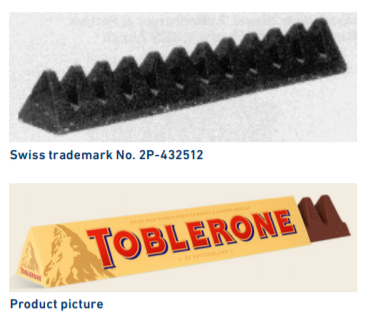 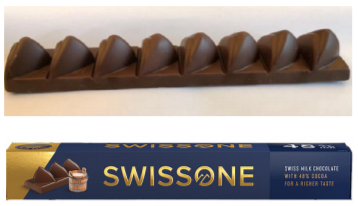 It consists of a series of rounded tetrahedra including small emphasis or gradation in the form of rounded triangles. The series of these tetrahedra may be reminiscent of a group of mountains. The SWISSONE chocolate bar comes in square (cuboid-shaped) packaging with prominent and centrally placed bright golden SWISSONE lettering on all three sides of the packaging. Two stylized mountain silhouettes are placed in the “O” of the SWISSONE lettering. The color of the packaging is dark blue with a shiny gold area on the left-hand side of the opening. Further elements of the packaging include the depiction of a cocoa bean and the number “48” on the upper side and of three units of the SWISSONE chocolate bar and a filled milk bucket on the front.

Under trademark law, the Commercial Court came to the conclusion that even on the basis of a strong scope of protection, low attention of the relevant public and the strict standard resulting from the identity of the goods, the SWISSONE chocolate bar would be sufficiently different from the three-dimensional TOBLERONE trademark in order to exclude a likelihood of confusion. The angular and linear triangles would dominate the overall impression of the three-dimensional TOBLERONE trademark. The shape of the triangles would strive upwards and appear rather simple as a result. On the other hand, the SWISSONE chocolate bar with its rounded tetrahedra would appear rather soft and roundish, thereby creating a rather flat and also more complex overall impression. Similarities in nondistinctive elements, such as a bar-like shape due to the positioning of formative elements at regular intervals, would not change this perception. Rather, because of further differences such as different distances between the formative elements, different numbers of formative elements or the placing of the tetrahedra on a cuboid base, the relevant public would assume that the products come from different companies.

For the assessment under unfair competition law, the court primarily contrasted the packaging of the two products. The packaging would differ in various ways: they have a different shape (square vs. triangle) and coloring (dark blue vs. creamy yellow) and contain different figurative elements (three units of the SWISSONE chocolate bar with milk bucket vs. the shaded Matterhorn). The court laid also great emphasis on the differences between the brand names SWISSONE and TOBLERONE as depicted on the packaging. They would differ in various aspects. First, visually because SWISSONE was held in thin font and glossy gold color while TOBLERONE was dominated by its red color; second, acoustically because of the different amounts of syllables and because the element “one” in SWISSONE was likely to be pronounced in English and thus differently to “one” in TOBLERONE; and third, in their meaning as there are no semantic similarities. Furthermore, due to the strong differences between the two chocolate bars, there would also be no pre-sale or post-sale confusion between the products themselves.

Finally, the court also denied that there was an exploitation of reputation. The TOBLERONE packaging and the SWISSONE packaging would create a clearly different overall impression. The packaging of the SWISSONE chocolate bar would objectively not be suitable to create associations to Kraft Foods or to goods offered by Kraft Foods. Consequently, the court also denied an image transfer from TOBLERONE to SWISSONE. And as far as the similarities between the packaging are concerned, there would be objective reasons for them: the use of the golden color is to convey value and quality; the reference to “Switzerland” is a common quality statement for chocolate products; the use of mountain motifs shall also refer to Switzerland, the country of mountains; the similar packaging size can be explained by the fact that chocolate is often offered in 100g size; the suffix “one” is not to be understood as an allusion to TOBLERONE due to the preceding English word element ”Swiss”.

This decision is a further example for how tough it can be to fight against lookalikes before Swiss courts, particularly when it comes to obtain preliminary injunctions. Nevertheless, we take the view that the verdict could just as easily have gone the other way, in particular with regard to the unfair competition claims. The similarities in the logos, in the packaging and in the shapes of the chocolate bars may each on their own, and even in combination, indeed not be enough to affirm a likelihood of confusion. However, the aspect of unfair exploitation of TOBLERONE’s reputation would have deserved more careful consideration. According to the Federal Supreme Court, there exists an illicit image transfer in terms of arts. 2 and 3 par. 1 let. e of the Unfair Competition Act, if (i) two signs or get-ups are similar, (ii) the younger sign or get-up creates a reference to the older one and (iii) the similarity cannot be interpreted other than as an imitation of the older reputed sign/get-up (ATF 135 III 446, cons. 7.1 – “MALTESERS/KIT KAT POP CHOC”). TOBLERONE chocolate is certainly well-known among Swiss customers. Accordingly, it may be fair to assume that the high amount of similarities – including the identity of the element “ONE” – was not just coincidental and that it cannot be “interpreted other than as an imitation” of TOBLERONE. This applies regardless of whether one or the other consumer may pronounce the element “ONE” differently or in the same way. There is at least a clear association of the SWISSONE chocolate with the well-known TOBLERONE