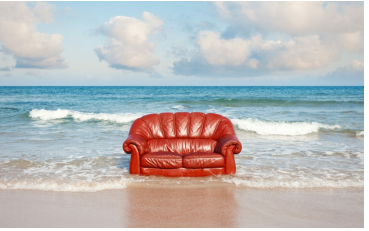 Here’s the background: Complainant asserted U.S. Design Patent No. 716,576, entitled “Sofa with Adjustable Table,” which claims the design for a sofa with an adjustable table in the middle. The claimed design and accused sofa are shown below:

It’s well-established that the prosecution history is intrinsic evidence that can limit the scope of utility patent claims; it’s less well-established that design patents follow the same rules. See Pac. Coast, 739 F.3d at 700-702. And, due to the graphical nature of design patent claims, it can be challenging to define the full breadth of subject matter surrendered when a design patent applicant cancels drawings. See id. at 704 (“Claiming different designs does not necessarily suggest that the territory between those designs is also claimed.”). But at the very least, when an applicant cancels a drawing that depicts a particular feature, e.g., two holes in a boat windshield post, it surrenders any infringement claim against designs that also include that feature. Id. at 704-05.ALJ Cheney held there was no infringement, including on the grounds of prosecution history estoppel. The original application included drawings of sofas without arm caps, but, during prosecution, Complainant cancelled every drawing of capless designs — pursuing only claims to sofas with capped arms, as shown below: 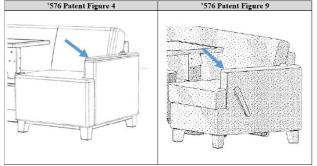 That’s what happened here. The original drawings depicted both capped and capless sofas. The inventors cancelled the drawings claiming capless arms twice during prosecution, both times in response to patentability rejections under 35 U.S.C. § 112. The allowed design claim does not include capless arms. Because the inventors’ claim as originally filed included a capless design, but the issued claim of the ’576 patent did not, ALJ Cheney found there was a surrender of claim scope in response to a patentability rejection, which limits the proper legal scope of the design patent to only capped designs.

Having resolved this claim scope issue, the only remaining question was whether the accused capless sofa designs fell within the scope of the surrender. ALJ Cheney held that it did. Accordingly, because the doctrines of literal infringement and infringement by equivalents merge for design patents, ALJ Cheney concluded that the accused capless designs did not infringe.

This case serves as an important reminder for design patents that prosecution is a negotiation with the USPTO. Narrowing a claim as a condition for obtaining a patent precludes the patentee from recapturing the original claim scope through subsequent litigation.

For design patents, the challenges in determining prosecution history estoppel arise when an accused design doesn’t match either the original application drawings or the allowed claim, as was the case in Pacific Coast. But, the analysis is simpler when the accused design has a feature that the applicant tried and failed to claim during prosecution; in those circumstances, the prosecution history shows that no matter what the scope of the claimed design is, it cannot reach designs with the surrendered feature.