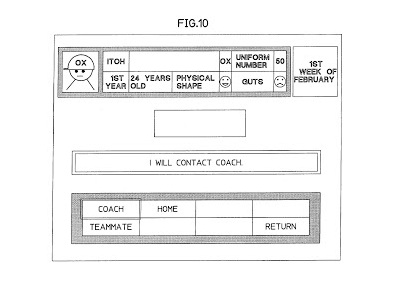 U.S. Patent No. 5,885,156 (the ‘156 Patent) describes a method for achieving experience points through dialog. The ‘156 Patent specifically relates to Konami’s Pawapuro or Power Pros series, which is a baseball game that features some role-playing game elements. Power Pros features a mode called “Success Mode,” which entailed users playing the life of an up-and-coming baseball player. Users start off with low stats and must train to become a better player. Part of the mode is managing the baseball player’s social life as well. The game generates random events that impact the baseball player’s stats. The ‘156 Patent describes the method of how the social events affect the player’s stats. For every random event, a set of options are given to the user, each generating a different outcome. The user earns experience points for choosing an option, but not every option is treated equally. Some options may give players more experience points than others, while some may hurt a player’s stats. Every play-through of “Success Mode” is different because the events are randomly generated.