On 2 December 2017, the U.S. Senate passed its version of a bill for Donald Trump’s tax reform plans (Tax Cuts and Jobs Act; TCJA) with a vote of 51 to 49, giving the tax reform, called “historic” in the U.S. Senate’s Finance Committee’s press release, even more impetus. On 16 November 2017, the U.S. House of Representatives passed its own version of the TCJA with a 227 to 205 vote (see the House Ways and Means Committee’s press release), making it a real possibility that the TCJA could be signed by Donald Trump before this year ends – and that the new law could take effect in 2018. Now is the time for German taxpayers with economic ties to the U.S.A. to look into how the new law could affect them.

The last major U.S. tax reform – which included decreasing the U.S. corporate tax rate from 47% to the current 35% – was in 1986 under the presidency of Ronald Reagan. Since then, there have been many discussions about overhauling the U.S. tax system, but now, with the current combination of a Republican President, a Republican majority (no matter how small) in both the Senate and the House of Representatives and the high political priority given to the issue since the presidential election campaign, the idea has gained traction for the first time – and with previously inconceivable speed – and seems more likely to come to fruition than ever before.

The basis for the current U.S. tax reform ideas can be traced back to a policy paper drafted by the U.S. House of Representatives’ Ways and Means Committee published on 24 June 2016 called the House Republican Blueprint (“Blueprint”). The steps suggested by the Blueprint for achieving the overarching goal of economic growth in the U.S.A. include:

Although the “big six” (six politicians in high positions) strongly denounced the border adjustment in a joint statement issued on 27 July 2017, their policy statement published on 27 September 2017 under the title “Unified Framework for Fixing our Broken Tax Code”includes two additional important items:

These items – with more or less significant changes in content – are also found in the versions of the TCJA that have now been issued by the U.S. House of Representatives and Senate, which also contain numerous other additions. The following table provides a – rough and not exhaustive – overview of selected commonalities and differences of the two bills regarding intended changes in corporate taxation: 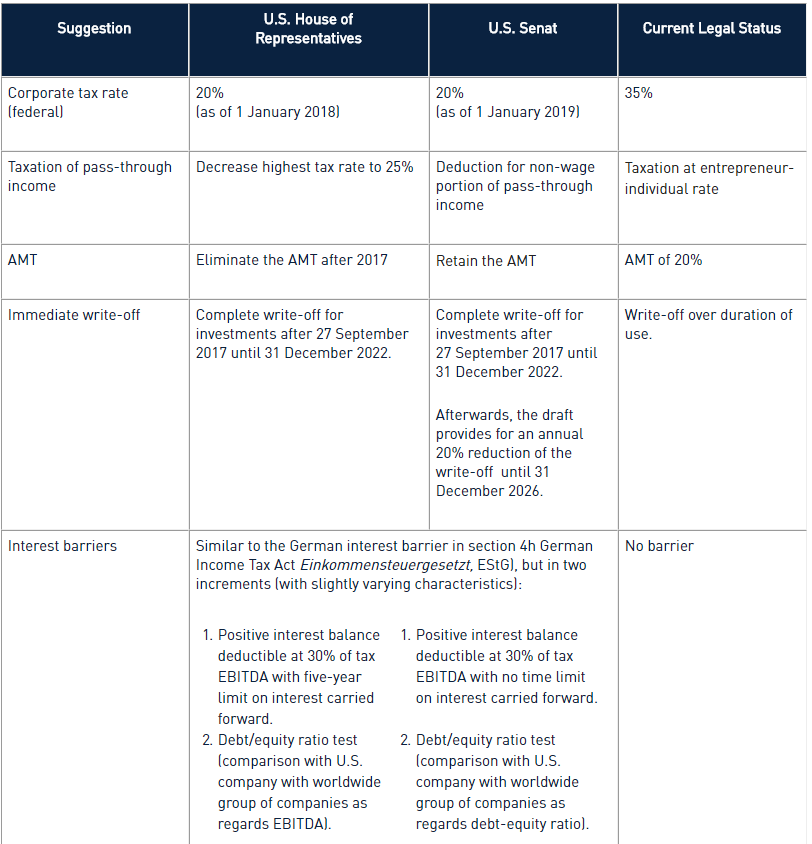 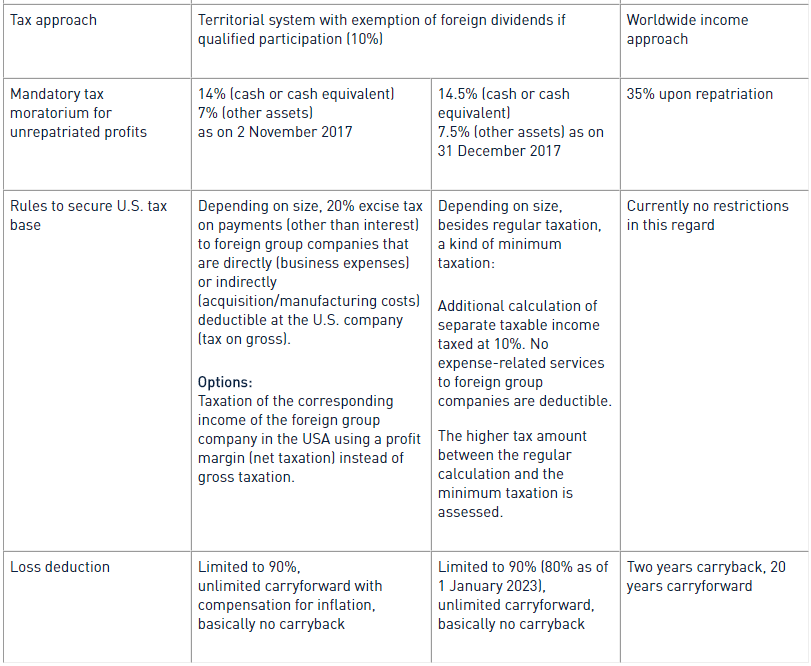 The legislative process now calls for both versions to be merged into a version coordinated between the Senate and the House of Representatives for a new vote. On 1 December 2017, the Joint Committee on Taxation of the U.S. Congress published a comparison report showing the commonalities and differences between the various TCJA versions. It is not inconceivable that the final version can be submitted to the President even before 24 December 2017..

The consequences for German taxpayers with U.S. ties must be determined separately for each individual case, and the benefits or disadvantages can be significant. Thus, the following – by no means complete – list of consequences must be examined in the context of an overall viewpoint at company as well as group level regarding their effect on tax structuring, tax returns and (group) accounting:

In summary, there is currently a great deal of uncertainty as to what impact the implementation of the U.S. tax reform will have (possibly very soon) on tax and accounting for German taxpayers. Nevertheless, the basic principles of the draft legislation versions proposed by the Senate and House of Representatives, which are now available for review, have been set and should be taken into consideration in the tax and accounting (group) planning of German taxpayers with U.S. ties as soon as possible.