Welcome to the second issue of Mobility Matters Quarterly. This publication is designed to provide those in the automotive and other mobility industries with updates on the latest trends and developments related to environmental mobile source and transportation safety laws and regulations.

The United States Supreme Court issued its decision in Ford Motor Company v. Montana Eighth Judicial Dist. Ct., 141 S. Ct. 1017 (2021) on March 25, 2021, deciding in a consolidated appeal of two product liability lawsuits that jurisdiction over Ford was appropriate in a forum where the accident occurred and the plaintiff was a resident even though Ford did not design, manufacture, or originally sell the vehicle into that forum (a subsequent owner took the vehicle to the forum). In deciding the scope of the requirement that a claim must “arise out of or relate to” the defendant’s contacts in the forum, the Court held that even where the manufacturer did not place the subject vehicle into the forum, if it otherwise extensively served the forum market, including for the make and model of vehicle at issue, it had sufficient suit-related contacts with the forum to justify the exercise of personal jurisdiction. In the nine months since, state courts and lower federal courts have applied the decision in interesting ways. The following is a quick summary of some cases evaluating personal jurisdiction and deciding in favor of defendants:

On June 29, 2021, the National Highway Traffic Safety Administration (NHTSA) issued a Standing General Order (SGO), as amended on August 5, 2021, requiring manufacturers and operators of vehicles equipped with Level 2 advanced driver assistance systems (ADAS) and Levels 3-5 automated driving systems (ADS) to report crashes to NHTSA. The SGO highlights NHTSA’s increased interest in ADAS and ADS technologies. NHTSA explained that the purpose of the SGO is “to obtain timely notice of incidents that may provide information regarding potential safety defects on Level 2 ADAS, ADS, or vehicles equipped with these technologies.”

The SGO establishes two different reporting timelines for crashes, primarily depending on whether the crash resulted in death or serious injury. Specifically, crashes that meet the following criteria are subject to a one-day reporting timeline: (1) the vehicle involved in the crash was on publicly accessible roads in the United States; (2) the ADS or Level 2 ADAS was engaged for any amount of time during the period from 30 seconds immediately prior to the crash through the conclusion of the crash; and (3) the crash resulted in an individual being transported to the hospital for medical treatment, a fatality or an airbag deployment, or involved a vulnerable road user (such as a pedestrian or bicyclist). Further, crashes involving ADS but not meeting the third criteria must be reported to the agency on the 15th calendar day of the month following the calendar month in which notice of the incident was received. (NHTSA’s SGO does not require manufacturers to report Level 2 ADAS crashes that do not meet the third criteria.)

Among other things, the Infrastructure Act’s motor vehicle safety provisions:

EPA touts the revised GHG standards as the strongest vehicle emissions standards ever established for light-duty vehicles in the United States. The standards increase in stringency from 2023 to 2026, accelerating at a rate of between 5% and 10% each year. In comparison, the prior standards under the SAFE Vehicles Rule increased at a rate of roughly 1.5% per year. The figure below depicts EPA’s revised standards compared to prior proposed and final standards. 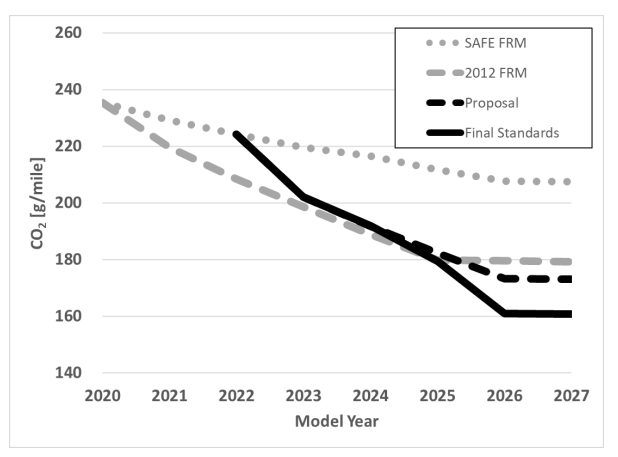 EPA expects that the revised GHG standards will result in an average fuel economy label value of 40 miles per gallon (mpg). EPA also anticipates the rule will force automakers to implement “clean” technologies and produce more electric vehicles, and EPA is offering a number of program flexibilities and incentives to assist auto manufacturers in complying with the revised standards, such as:

The revised GHG standards final rule is set to go into effect on February 28, 2022, although it may yet be challenged in the D.C. Circuit Court of Appeals.

The ban is part of California’s zero-emission strategy and impacts not only manufacturers, but also private homeowners and commercial landscapers. In order to assist small businesses impacted by the ban, California made $30 million in funds available to purchase new zero-emission equipment through its Clean Off-Road Equipment Voucher Incentive Project (CORE). Meanwhile, financial analysts estimate that battery-powered lawn equipment will be a $14.1 billion industry by the end of 2024. Recent reports indicate that other states including New York and Illinois are considering implementing similar bans.

On December 13, 2021, after 14 meetings that commenced in 2019, the California Lithium-Ion Car Battery Recycling Advisory Group (Advisory Group) submitted its “Draft Report” regarding lithium-ion car battery recycling for public comment. As more electric vehicles (EVs) enter the market and eventually retire from service, California began to evaluate what should be done with these batteries once they reach their end of life. As discussed in the previous Mobility Matters Quarterly newsletter, California law AB2832 (2018) requires the Advisory Group to issue policy recommendations based on this Draft Report to help resolve this issue. The Draft Report will eventually be used to promulgate California regulations on lithium-ion recycling, with the United States EPA and other states potentially following suit. Public comment on the Draft Report is open through February 16, 2022.

As provided in the Draft Report, the Advisory Group’s recommended policies focused on two main areas: (1) defining responsibility for the coordination and payment of recycling in cases where the cost presents a burden on the vehicle owner and the battery is unwanted, and (2) mitigating the barriers that may currently inhibit the reuse, repurposing, and recycling of the vehicle battery. The most supported Advisory Group proposal was the “core exchange and vehicle backstop” policy, which builds on already existing industry standards and policies. In summary, this policy defines the responsibility for out-of-warranty batteries under three different possible scenarios: (1) EVs still in service, (2) EVs reaching end-of-life where a dismantler takes ownership of the vehicle, and (3) EVs reaching end-of-life where the vehicle has an OEM-certified battery and is not acquired and removed by a licensed dismantler.

The second most popular Advisory Group proposal was the “producer take-back” policy, which states that the auto manufacturer is responsible for ensuring proper repurposing, reuse, and recycling of its batteries at a licensed facility with no cost to the consumer as long as the batteries are no longer wanted by the owner and no other entity has taken possession of the batteries. Both policies require further consideration to define what constitutes “proper recycling” and how it should be verified.

In support of these policies, the Draft Report also included proposals to address specific concerns in EV battery reuse and recycling to ensure whatever processes are chosen are safe and environmentally responsible. Most of these policies surround labeling and digital identifier requirements, supporting the development of recycling facilities through incentive packages and a guaranteed permitting timeline, supporting the enforcement of unlicensed dismantling laws, and training programs to ensure that the people who handle end-of-life vehicles have the skills needed to safely work with the vehicles and assist with navigating regulatory requirements.

While the Draft Report provides only recommended policies at this time, it provides a glimpse into the potential direction and focus that California and possibly U.S. EPA and other states may take regarding regulation of EV battery recycling. The final report is expected to be submitted to California EPA by late March/April 2022.