Where does the past week leave the UK?
Blog Brexit Legal

On 24 June, Prime Minister Theresa May announced her intention to resign as Prime Minister. She will stand down as leader of the Conservative Party on 7 June (after President Trump’s visit and the D-Day commemorations), and as Prime Minister as soon as the Conservative Party has chosen a successor. Her tenure in office had been looking increasingly challenged for some time. The immediate trigger for her resignation was her final attempt to get her Brexit deal done, which included the offer of the possibility of a further referendum. This proved more than her Party could accept, and the Party would have forced her out of office had she not agreed to resign.

The previous day, 23 June, the UK electorate voted in the European Parliament elections. The results were announced on 26 June after polling had closed across the EU. Turnout was slightly up on immediate previous EP elections, but at 37% below the EU average and well below both UK General Election and 2016 Referendum turnout. The results were: 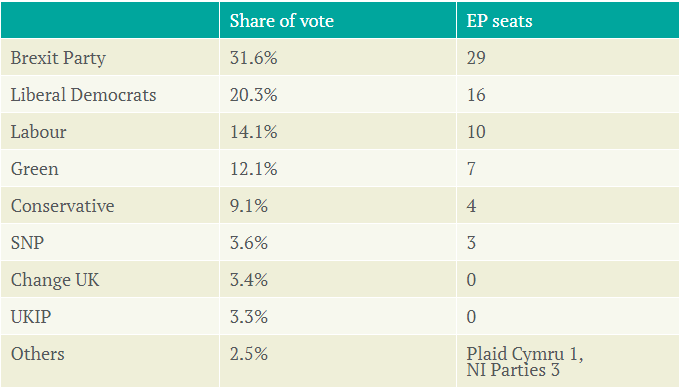 This represents a notable success for Nigel Farage’s Brexit Party (which was only publicly launched on 12 April), a very bad result for Labour and a catastrophe for the Conservatives (their worst result in modern democratic history). It also represented a very strong performance for the overtly anti-Brexit parties (Lib Dems, Greens, and Change UK, between them secured over 35% of the vote). The immediate conclusion is that both the main parties have been punished by their electorate specifically for their indecisive stance on Brexit, and the division between those who favour a “pure Brexit” (no deal Brexit unless the EU agrees to a much better deal), and those who favour a further referendum in the hope of reversing the Brexit decision, or indeed an immediate Parliamentary revocation of Article 50, has sharpened in a country that remains deeply divided. But neither “no deal” nor “people’s vote” secured anything close to a clear majority. Both Conservatives and Labour have a lot of thinking to do. In the case of the Conservatives, this will happen during the forthcoming leadership election.

The next Prime Minister…

The Conservative leadership election will formally start on 7 June, but eleven candidates have already declared. The election is a two-stage process: in the first stage, the Conservative MPs narrow the candidates down to two; the Party membership then selects between the two. All polling suggests that the Party membership will favour a candidate who both campaigned for “Leave” in the 2016 referendum and is willing to countenance a no deal Brexit. However, leadership elections are unpredictable, and the favourite at the outset, in this case the former Foreign Secretary Boris Johnson, rarely wins. The Party expects to have the election concluded before the end of July, at which point the winner will succeed Theresa May as Prime Minister.

The candidates face a complex trade-off between short-term electoral tactics and medium-term strategy. The pro-Brexit European Research Group (ERG) within the Party has shown that its MPs (a substantial minority of the Party’s MPs) will only back a leader who supports no deal. And the Party membership is believed to be overwhelmingly (70-80%) in favour of no deal as the best route to leave the EU. But a number of Conservative MPs have indicated that their opposition to no deal is so strong that they would resign from the Party and cause the Government to lose a vote of confidence – only 3 MPs resigning would risk losing a no confidence vote, even with the support of the Northern Irish Democratic Unionist Party (DUP). There also remains the problem that a no deal Brexit is not itself a final outcome: the UK and EU would still need to resolve the Irish border issue, and the UK would still need to negotiate trade and other agreements with the EU.

In short, the apparent conundrum for anyone aspiring to lead the Conservative Party is that they cannot win the leadership unless they are willing to espouse a no deal Brexit, and they cannot command a majority in Parliament if they do.

What does it all mean for the Parties?

The parliamentary arithmetic has not changed, although it is possible that the Brexit Party may win its first Westminster seat in the Peterborough by-election on 6 June (traditionally a Conservative-Labour swing seat). These EP election results are likely to harden opinions on all sides, making compromise even more difficult to find.

For the Conservative Party, and therefore for the next Prime Minister, the idea of any further delay to Brexit beyond the 31 October deadline is unthinkable. There are no verifiable statistics, but polling evidence suggests that as well as 70% of Conservative voters, around 70% of Conservative constituencies voted Leave in the 2016 referendum – many of these voters deserted the Conservatives in these EP elections because of their failure to deliver Brexit. The focus of the new Prime Minister and Government is therefore likely to be a rapid attempt to renegotiate Theresa May’s Brexit deal with the EU, which the EU has said it will not renegotiate, backed by a credible no deal fall-back. But divisions within the Conservative Party remain, and looking to the future, it is not clear that if the Conservatives become the “hard Brexit” Party, they will be able to sustain a Parliamentary majority in future elections: a proportion of the Brexit Party’s success was at the expense of Labour and these voters are unlikely to vote Conservative in future. Polling suggests as many as half of those who defected to the Brexit Party in the EP elections will not return to the fold. The Conservatives, or at least some of them, still harbour a strong “one nation” tradition, which sits ill with the divisiveness of a hard Brexit. So there will be an intense debate in the Conservative Party about how to secure Brexit by 31 October and sustain future electoral success, against the backdrop of a Parliament which has a clear majority against a no deal Brexit.

The debate in the Labour Party will not be much easier. While polling evidence suggests that around 70% of Labour voters voted Remain in the 2016 referendum, nearly 60% of Labour constituencies are believed to have voted Leave (the Leave vote was quite widely distributed, whereas the Remain vote was concentrated predominantly in urban constituencies). So while the Party membership overwhelmingly favours a further referendum with the Party supporting Remain, as do many Labour MPs, a number of Labour MPs fear for their seats if the Party becomes a “Remain” Party. The Brexit Party did well in traditional Labour seats in the North of England. The pressure on the Party Leadership to come out more clearly in favour of a further referendum – rather than keeping it as an “option” – will be strong. And if it is to aspire to win future elections outright, Labour needs to repair its poor performance in Scotland, which remains solidly anti-Brexit.

And where does that leave us on Brexit?

The new Prime Minister will inherit the Conservative Party’s parliamentary lack of majority, reliance on the DUP for a working majority, and division over whether a no deal Brexit is sustainable. An early challenge will be whether to continue the current Parliamentary session (already the longest since 1651) or “prorogue” (i.e. end a session of) Parliament. A new session would have to be opened with a Queen’s Speech, which would require a new confidence and supply arrangement with the DUP, which would be a further challenge – but failure to secure a Parliamentary majority for the Queen’s Speech would almost certainly lead to the collapse of the Government, and could well end the fledgling term of the new Prime Minister. So a continuation of this “zombie Parliament” looks likely. The Government normally enjoys a significant benefit through its control of the legislative timetable. But the advent of a Prime Minister willing to pursue a no deal Brexit approach would strengthen the resolve of MPs to seek to use amendments to Brexit legislation to make no deal Brexit unlawful without, for example, holding a confirmatory referendum. Significantly the Speaker, John Bercow, yesterday announced that he would not – as some had assumed – retire in July: the Speaker’s willingness to use his position to ensure that the Government acts on the will of Parliament would make a new Prime Minister trying to drive towards a no deal Brexit much harder.

Although as a matter of international law, the UK leaves the EU regardless of whether it has negotiated a deal on 31 October, some domestic legislation is necessary for a no deal Brexit not to give rise to legal uncertainty. The only way the new Prime Minister could avoid the risk of legislative amendment completely would be to avoid any new legislation before the date of Brexit, but that would be a high risk approach to Brexit, and create huge challenges for post-Brexit Government. No deal Brexit has strengthened as an option in the polls, but remains far from enjoying majority support of the electorate. Delivering a messy and chaotic no deal Brexit, over-riding the will of Parliament but then being unable to govern effectively, would be a triumph of hope over reason.

So while no deal Brexit has become more likely as a component of Conservative Party, and therefore Government, policy, significant obstacles to it remain in Parliament. However, the prospects for a Brexit deal also remain complex – opposition to the Withdrawal Agreement as it stands has hardened in 2019, and probably even more so as a result of the EP elections. There is no sign that the EU would be willing to re-negotiate the most contentious part of it, the Irish border backstop. Without such re-negotiation a Parliamentary majority looks unachievable.

The Parliamentary deadlock makes prediction of the outcome as difficult as ever. But the combination of a new Prime Minister and the disastrous performance by the two major parties in the EP elections means that the default of the UK leaving the EU without a deal on 31 October, if nothing else has happened before then, has become more likely. The new Conservative Prime Minister would find it extremely difficult to ask for a further extension to prolong the deadlock. However, that prospect in itself, combined with possible evolutions in the Labour Party’s position, also increase the possibility of Parliament using legislative amendment to frustrate a no deal Brexit. One likely way to do this would be to impose a no-deal : no-Brexit referendum. If Parliament were to do this, it is likely that the EU would agree to extend the Brexit deadline to allow the referendum to take place.