It's time for a discussion on the proposed Artificial Intelligence: Australia's Ethics Framework to inform the federal government's approach to AI ethics in Australia.

Governments around the world are considering how to best regulate and capitalise on AI technology while limiting the risk of poor outcomes.

At this stage AI technology and its applications are so broad that there is a strong effort to develop frameworks to guide ethical AI development, largely deferring traditional lawmaking until more is known.

In 1942 science fiction author Isaac Asimov introduced the world to The Three Laws of Robotics in his short story Runaround. The simple rules to not injure, to obey and to protect have become a touchstone for science fiction authors ever since. However, regrettably for real world developers incorporating artificial intelligence and machine learning (AI) into their systems, these modest commands offer very little guidance on the real world ethical considerations which they face.

Given the particular breadth of applications for AI, it is also difficult to point to any single law or set of laws that are relevant for Australian AI developers. In any given project a myriad of laws may be relevant. Depending on the project this might include a combination of government specific legislation (e.g. the Social Security (Administration) Act 1999), human rights obligations, anti-discrimination legislation, data sharing legislation and the Privacy Act 1988 (Cth), none of which have been developed with AI technologies in mind.

Acknowledging these challenges, the Australian government has recently joined jurisdictions around the world and started work on a framework to assist decision makers and developers to create and deploy AI driven technologies responsibly. While this article focuses on Australia's efforts, more information about developments abroad is discussed in The ethics of artificial intelligence: laws from around the world.

Following the White Paper, the Department of Industry, Innovation and Science published the Artificial Intelligence: Australia's Ethics Framework (Framework) authored by CSIRO's Data 61 to discuss how to best harness the benefits of AI technology, while limiting the risks which accompany it.

Given the pace and breadth of development in AI, government, industry and developers will each need to play their role in addressing ethics. The Framework is intended to create a dialogue and serve as a starting point to help guide decision making and to engender trust.

In developing the Framework, CSIRO's Data 61 formed the view that to truly unlock the potential of AI the public will need to have trust in AI applications. One mechanism to achieve this is aligning AI application development with ethical and inclusive values from the outset. It is not about rewriting laws or ethical standards but updating them so they can be applied in the context of new AI technologies.

The Framework draws on a number of complementary works and case studies from around the world to identify eight core principles which it suggests should guide AI development. Namely: 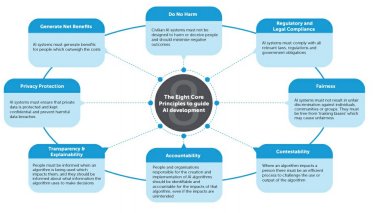 In addition to the eight core principles the Framework also proposes a 'toolkit' to help individuals, teams and organisations practically apply these core principles to their work. The Framework emphasises that there is no 'one-size fits all' solution when it comes to addressing ethics in AI, and it notes that the issues are challenging and not likely to remain static over time. As a starting point it extols those responsible for AI systems to ask

The Framework suggests a number of tools which might go to assist stakeholders in understanding how their systems express and incorporate these core principles. The tools include:

As developments in AI advance, governments and private actors seem acutely aware of the serious ethical considerations at play but are loath to miss out on the opportunities which AI technology presents. It is unlikely that anything as elegant as Asimov's Three Laws will ever be feasible as a rule of law; however, legislation will no doubt evolve to keep pace as the sector consolidates. With the community consultation window for the Framework having closed on 31 May, and the return of the incumbent government, we can expect developments in this space to be ongoing. In the meantime, governments abroad and major players in the tech sector are forming their own frameworks and best practices to address the ethical risks which advancements in AI pose, which we discuss further in The ethics of artificial intelligence: laws from around the world.