A recent interlocutory decision in ongoing civil cartel proceedings against BlueScope Steel Limited is a timely reminder that documents provided voluntarily to the ACCC as part of the informal merger review process may, in certain circumstances, be used by the regulator in subsequent proceedings — even where those proceedings are unrelated to the original merger.

In Australian Competition and Consumer Commission v BlueScope Steel Limited (No 3), O’Bryan J held that so-called “merger documents” produced by BlueScope to the ACCC in support of an earlier application for informal merger clearance were later admissible under the Evidence Act 1995 (Cth):

In August 2019, the ACCC commenced proceedings against BlueScope and Mr Jason Ellis, the then General Manager of Sales and Marketing of BlueScope’s Coated Industrial Products Division, through which BlueScope manufactured and supplied various flat steel products in Australia.  The ACCC alleged that between September 2013 and June 2014, BlueScope and Mr Ellis attempted to induce certain suppliers of flat steel products in Australia to make an arrangement or arrive at an understanding containing a cartel provision, contrary to s 44ZZRJ of the Competition and Consumer Act.  One of those suppliers was OneSteel Pty Ltd.

At trial, O’Bryan J made rulings with respect to various categories of evidence.  One such category was so-called “merger documents” provided to the ACCC by BlueScope in August 2013 in support of an application for informal clearance of a proposed acquisition of certain OneSteel Sheet & Coil distribution business assets from Arrium Limited.  The ACCC sought to tender those documents, which relevantly comprised:

The merger documents contained information relevant to the ACCC’s assessment of whether BlueScope’s proposed acquisition would contravene s 50 of the Competition and Consumer Act, including various statements describing BlueScope’s steel business, economic analysis and submissions.  Importantly, the merger documents contained matters relevant to the issues in the cartel proceeding, namely “representations relating to the nature and extent of competition in respect of the manufacture, importation and distribution of flat steel products in Australia”, which were contemporaneous with the conduct the subject of the ACCC’s allegations.

Were the merger documents admissible?

The merger documents would ordinarily be inadmissible by operation of the hearsay rule in s 59 of the Evidence Act.  The ACCC submitted that the documents were nevertheless admissible on three bases:

BlueScope disputed these bases, and additionally contended that the merger documents contained representations which constituted inadmissible opinion evidence, and which were irrelevant to the issue of competition in the proceeding.  The parties’ respective contentions, and O’Bryan J’s conclusions, are summarised in the table below: 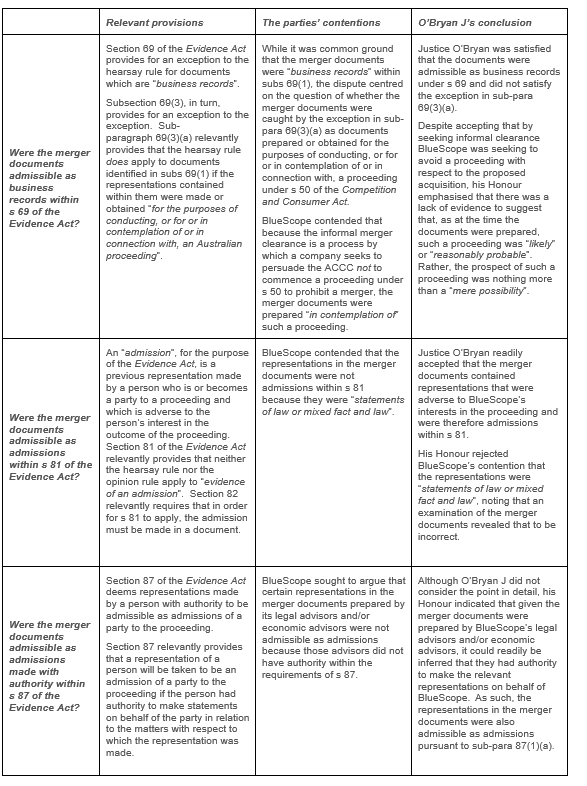 BlueScope separately contended that to the extent that the merger documents contained statements concerning competition and competitors for the supply of flat steel products in Australia, those statements were irrelevant to the cartel proceeding.  BlueScope sought to distinguish between:

BlueScope submitted that because market definition “is purposive and depends on the issue at hand”, statements in relation to competition in a merger context had no relevance to the cartel proceeding.

Section 50 requires an enquiry into the nature and extent of competition in relevant markets and the likely effect of the merger on that competition. Thus, it requires a “market level” focus. In contrast, the definition of cartel provisions requires an enquiry into whether at least two of the parties to the contract, arrangement or understanding are or are likely to be in competition with each other in relation to the goods or services the subject of the cartel provision. Thus, the definition of cartel provisions focuses upon competition between individual suppliers. That means that the factual enquiry required in the context of cartel conduct is a subset of the factual enquiry required in the context of a merger. Ultimately, though, the enquiry concerns the same question: the existence of competition in respect of the supply of particular goods or services.

As such, his Honour concluded that the representations made by BlueScope in the context of its application for informal clearance (which relevantly identified its competitors in respect of the supply of flat steel products) were “likely to be highly relevant” to the issue of competition arising in the proceeding.

The decision of O’Bryan J is a timely reminder that: