The European Patent Office refused to grant a patent on a method of managing a queue of customers. Here are the practical takeaways of the decision T 0748/13 (Queue image/Q.NOMY) of 20.8.2019 of Technical Board of Appeal 3.5.01:

Letting the customer choose an image to represent him/her in the queue has only a psychological effect, but not a technical effect.

This European patent application concerns a method for queue management. In queuing systems before the invention, it was common that the customer received a ticket with a number representing the customer’s place in the queue, and the customer was summoned by displaying or announcing the number. This sometimes resulted in a failed summons, because the customer did not notice that his number was being displayed or announced.

The invention deals with this problem by allowing the customer to select an image, from a set of available images, to represent him in the queue. The customer is summoned by displaying the image. According to the application, the customer is more likely to notice an image that he himself has selected. 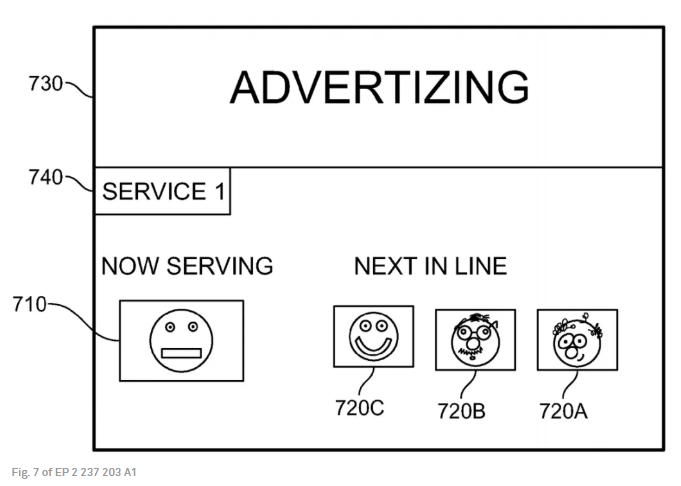 Here is how the invention is defined in claim 1:

A computer-implemented method for management of a queue comprising:

receiving at a user interface identification information identifying a user;

presenting a plurality of images on a display, none of the presented images being associated with any other user currently in the queue;

receiving input selecting one of the images;

associating the selected image with the user;

updating a list of available images in response to the selection of an image, whereby a different image is associated with each user;

displaying the user’s queue status on a display (162) using the image; and

summoning the user when the user reaches the front of the queue by displaying the image associated with the user on a display.

In the Board’s view, the subject-matter of claim 1, differs from D1 in that the image is selected by the customer (user) from a plurality of available images presented on a display. This is the same difference as identified by the examining division in the communication of 23 February 2012. Although present claim 1 does not say that the input is received from the user (see point 4.3 above), the Board continues its analysis on that basis.

According to the patent applicant, using a self-chosen image instead of a number was inventive for the following reasons:

The appellant argued that, if the user is able to choose an image, there is a greater likelihood of the image being remembered, firstly because the act of having selected the image will be in the mind of the user, and secondly, the user is able to choose the image that he or she is most likely to remember. Thus, in the appellant’s view, the invention reduces the risk of a failed summons, which is a technical effect.

The Board is not persuaded. The effect mentioned by the appellant is psychological at best, and speculative at worst. It is entirely dependent on the user’s state of mind. The Board does not see any technical effect provided by allowing the user to select an image.

The technical problem solved by the invention is the modification of the QMS system of D1 to implement the user selection. The Board agrees with the examining division that the implementation would have been straightforward and obvious to the skilled person.

For these reasons, the board concluded that claim 1 does not involve an inventive step.