In February 2020 the Government directed the Australian Competition and Consumer Commission (ACCC) to conduct an inquiry into markets for the supply of ‘digital platform services’, meaning:

This is a long-term inquiry following on from the ACCC’s Digital Platforms Inquiry Final Report (June 2019), which identified a number of concerns in digital platform services markets. The ACCC is to produce an interim report every 6 months until March 2025.

This is the second interim report. Our coverage of the first interim report, which dealt with online private messaging, is available at: ACCC releases Digital Platforms Services Inquiry Interim Report on Online Private Messaging.

The ACCC found that Apple and Google are ‘critical intermediaries or gateways between app developers and consumers’, in circumstances where most Australians own smartphones and use apps every day, overwhelmingly downloaded from the App Store or Google Play Store. The ACCC also found that these two companies have a duopoly in mobile operating systems – one that covers almost 100% of the market both globally (Google ~73%, Apple ~27%) and in Australia (where the shares are approximately 50:50). The ACCC considers that these shares, along with significant barriers to entry, provide each of Apple and Google with significant market power in the supply of mobile operating systems.

The App Marketplaces Report therefore focuses on Apple and Google’s abilities to govern access to these stores and, in the ACCC’s view, potentially harm competition and harm developers and / or consumers.

In particular, the ACCC is concerned about:

What should be done?

The ACCC reiterated four recommendations from the Digital Platforms Inquiry Final Report as particularly relevant to these issues:

The ACCC has also put forward six ‘potential measures’ aimed at issues raised in the App Marketplaces Report more specifically. At this stage, these are not final or interim recommendations - the ACCC will continue to monitor and investigate the issues raised in the Report and ‘will revisit these concerns in a later interim report and, as part of this process, consider overseas developments and whether there is a need for regulation to address the concerns identified’. 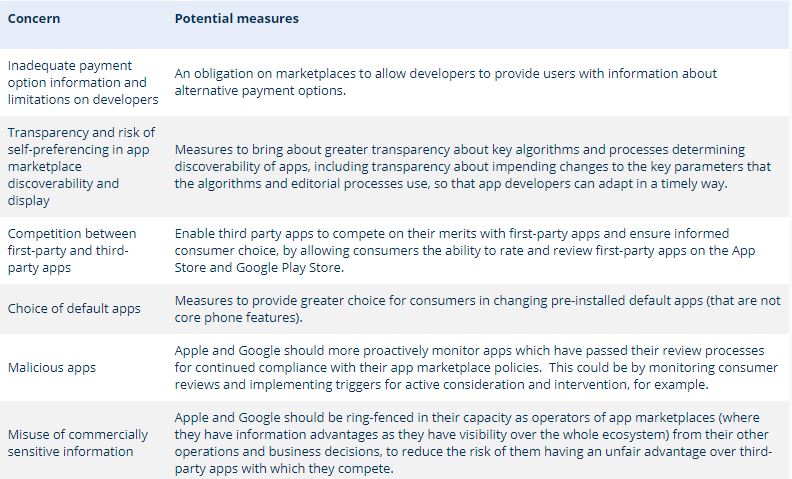 The ACCC has begun consultation and asked for submissions for its third topic area: competitive dynamics and defaults/choice screens in browsers and search services. The report is due to the Treasurer by 30 September 2021 and will likely be released in October.