United States Withdraws from Iran Nuclear Deal, Will Re-Impose Sanctions on Iran After Wind Down

The President issued a National Security Presidential Memorandum (NSPM) directing immediate preparations for the re-imposition of all US sanctions lifted or waived in connection with the JCPOA.4 Concurrently with the NSPM, the US Department of the Treasury, Office of Foreign Assets Control (OFAC) issued frequently asked questions to provide guidance on the sanctions that are to be re-imposed upon the expiry of two wind-down periods: (1) a 90-day wind-down period that will expire on August 6, 2018; and (2) a 180-day wind-down period that will expire on November 4, 2018.5 OFAC expects all sanctions that had been lifted under the JCPOA to be "re-imposed and in full effect" after November 4, 2018. The guidance is explanatory only and does not have the force of law.

Pursuant to the NSPM, the State Department reportedly (1) "revoked certain statutory waivers issued to implement the JCPOA sanctions relief;" (2) "issued the necessary statutory sanctions waivers to provide for a wind-down period;" and (3) "plans to take appropriate action to keep such waivers in place for the duration of the relevant wind-down periods."

i. Sanctions on the purchase or acquisition of US dollar banknotes by the Government of Iran;

ii. Sanctions on Iran’s trade in gold or precious metals;

iii. Sanctions on the direct or indirect sale, supply, or transfer to or from Iran of graphite, raw, or semi-finished metals such as aluminum and steel, coal, and software for integrating industrial processes;

iv. Sanctions on significant transactions related to the purchase or sale of Iranian rials, or the maintenance of significant funds or accounts outside the territory of Iran denominated in the Iranian rial;

v. Sanctions on the purchase, subscription to, or facilitation of the issuance of Iranian sovereign debt; and

In addition, the United States will revoke the following authorizations applicable to US persons:

i. The importation into the United States of Iranian-origin carpets and foodstuffs;

ii. Specific licenses issued in connection with the Statement of Licensing Policy (SLP) for Activities Related to the Export or Re-export to Iran of Commercial Passenger Aircraft and Related Parts and Services (JCPOA Aviation SLP); and

iii. General License I, which authorized US persons to enter into, and to engage in transactions that are ordinarily incident to the negotiation of and entry into, contingent contracts for activities eligible for authorization under the JCPOA Aviation SLP.

OFAC intends to revoke or amend the general licenses to narrow their scope to authorize the wind-down of activities by August 6, 2018, "as soon as is administratively feasible."

Starting on May 8, 2018, OFAC will no longer evaluate applications under the JCPOA Aviation SLP. In addition, OFAC expects to revoke specific licenses issued pursuant to the JCPOA Aviation SLP and issue authorizations to provide for the wind-down period that will end on August 6, 2018. OFAC will continue to consider applications under the safety of flight SLP.

i. Sanctions on Iran's port operators, and shipping and shipbuilding sectors, including on the Islamic Republic of Iran Shipping Lines (IRISL), South Shipping Line Iran, or their affiliates;

iv. Sanctions on the provision of specialized financial messaging services to the CBI and Iranian financial institutions;

v. Sanctions on the provision of underwriting services, insurance, or reinsurance; and

Additionally, OFAC intends to revoke General License H "as soon as is administratively feasible" and issue a revised authorization for the wind down of activities involving Iran previously authorized pursuant to General License H. General License H had authorized entities owned or controlled by US persons and established and maintained outside of the United States to engage in transactions with the Government of Iran or any person subject to the jurisdiction of the Government of Iran, except as provided in the license. This revised authorization will be effective until November 4, 2018, at which point the United States will revoke the authorization entirely. 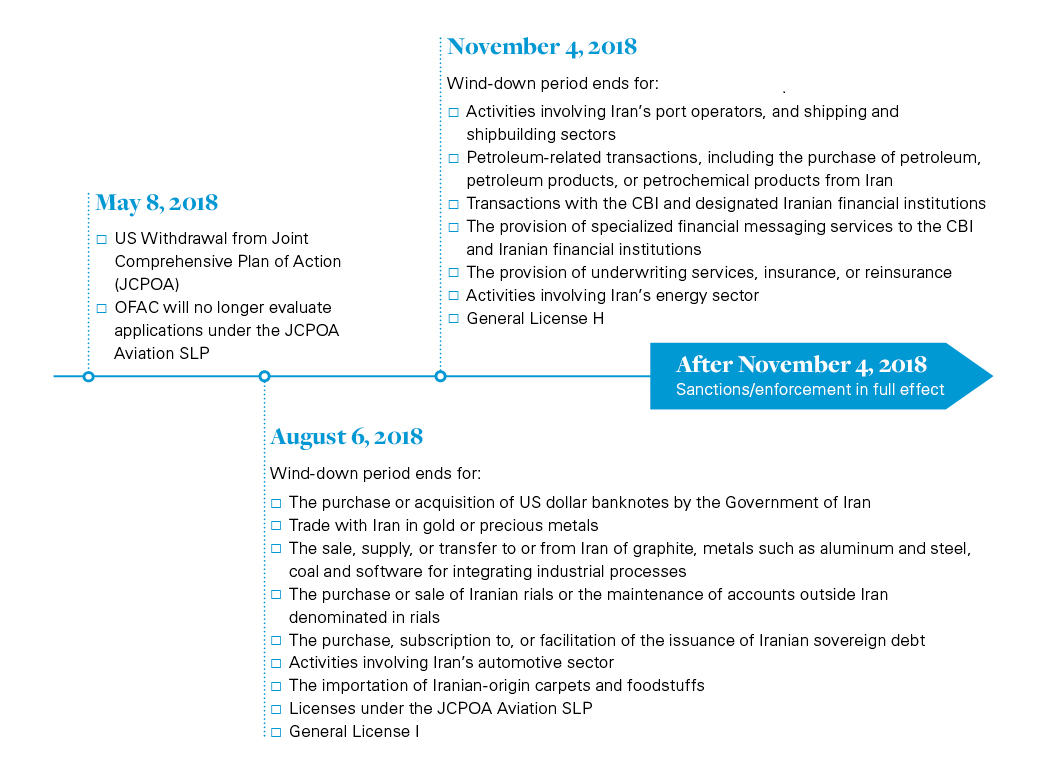 Consistent with the above, OFAC will take steps to permit US persons and non-US entities owned or controlled by US persons to receive payments for activities taking place during the wind-down according to the terms of the written contract or written agreement entered into prior to May 8, 2018, for goods or services fully provided or delivered pursuant to an OFAC authorization.

During the wind-down period, with respect to new activity, OFAC indicated that when considering a potential enforcement or sanctions action with respect to activities engaged in after August 6, 2018, or November 4, 2018, as applicable, it will evaluate efforts and steps taken to wind-down activities and will assess whether any new business was entered into involving Iran during the applicable wind-down period.

OFAC has advised that the provision or delivery of additional goods or services and/or the extension of additional loans or credits to an Iranian counterparty after the wind-down period, even pursuant to written contracts or agreements entered into before May 8, 2018, may result in the imposition of US sanctions unless exempt, authorized, or otherwise not sanctionable.

By November 5, 2018, OFAC will re-impose, "as appropriate," the sanctions that applied to persons removed from the List of Specially Designated Nationals and Blocked Persons (SDN List) under the JCPOA. Re-listed persons subject to secondary sanctions will have a notation of "Additional Sanctions Information – Subject to Secondary Sanctions" in their SDN List entry. Non-US persons that engage in certain activities with these re-listed persons after their re-listing could face secondary sanctions exposure.

OFAC advised that transactions conducted during the wind-down periods involving persons removed from the SDN List on January 16, 2016 could be sanctionable to the extent that (1) they are outside the scope of the wind-down waivers issued by the State Department; (2) they involve persons on the SDN List; or (3) they involve support for terrorism; human rights abuses in Iran or Syria; proliferation of WMD; or support for persons threatening the peace, security, or stability of Yemen.

EU Reactions to US Withdrawal from JCPOA

In a statement issued by EU High Representative Federica Mogherini, the EU expressed regret over President Trump’s announcement on the JCPOA and confirmed its continued commitment to full and effective implementation of the JCPOA (including with respect to partial lifting of EU sanctions) as long as Iran continues to implement its nuclear related commitments. Concerning the re-imposition of previously waived US sanctions, the EU promised to assess their implications and to "act in accordance with its security interests and to protect its economic investments." Germany, France and the UK echoed the message to uphold the JCPOA and ensure continued economic benefits to the Iranian people in a joint statement. In particular, the UK Government confirmed that it "encourages UK businesses to take advantage of the commercial opportunities that arise" in Iran, and to seek legal guidance when in doubt over the precise impact of the new US sanctions.

As discussed above, the US government is expected to take certain formal legal steps related to the re-imposition of US sanctions targeting Iran. Companies considering engaging in business related to Iran should monitor future developments closely and exercise caution to ensure compliance with all applicable sanctions.