On July 30, 2020, Virtual Immersion Technologies LLC sued General Dynamics Corp. alleging infringement of its U.S. Patent No. 6,409,599 (the ’599 patent). This is not the first time this patent has been asserted. In fact, this suit is the 43rd time that Virtual Immersion Technologies (VIT) has sued a party alleging infringement of the ’599 patent.

An earlier article in Finnegan’s AR/VR Litigation Update series describes in detail what is claimed by the ’599 patent. Briefly, the patent claims variations to VR systems that allow participants and performers to interact in a VR environment through input/output devices. In other words, the ’599 patent claims multi-participant VR performance theater, one embodiment of which is shown in Figure 3 below: 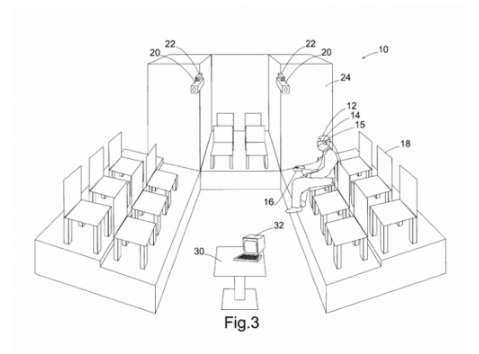 VIT asks for a judgment of infringement and monetary damages, including exceptional damages under 35 U.S.C. § 285.

Of the now 43 cases filed by VIT asserting the ’599 patent, 34 have been terminated—26 by voluntary dismissal by VIT and 8 by stipulated dismissal. Each of these represents a likely settlement by VIT. The 9 cases that are still pending, including the case against General Dynamics, have been filed within the past month.

If this case doesn’t settle, we may see General Dynamics answer the complaint, or perhaps move to dismiss the complaint as deficient in some respect. General Dynamics may also take further action against the ’599 patent, including filing a petition for inter partes review challenging the patentability of the patent and claims at issue in this case.